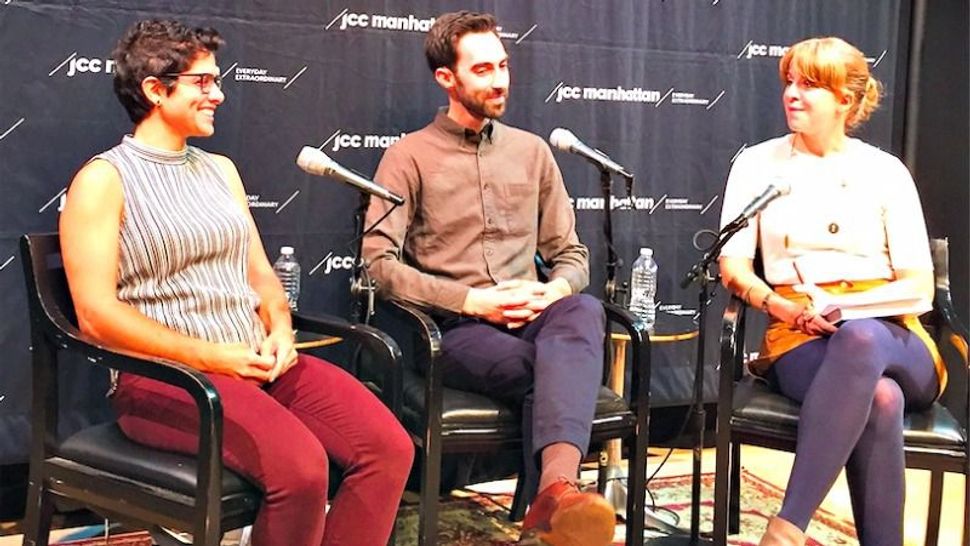 As a standing-room-only crowd of over 170 gefilte enthusiasts sat at tables listening to Liz Alpern and Jeffrey Yoskowitz dish about their their new book, “The Gefilte Manifesto: New Recipes for Old World Jewish Foods,” we heard a recognizable hiss from behind a black curtain. Fittingly, seltzer gas was being released as nibbles were plated for guests who came out to celebrate the book launch of Alpern and Yoskowitz’s love letter to Ashkenazic food traditions.

The crowd recognized it and laughed.

Leah Koenig, author of “Modern Jewish Cooking,” interviewed the founders of The Gefilteria (artisanal gefilte fish producers since 2012) at the JCC in Manhattan as comfortably as if they were whipping up cauliflower and mushroom kugel in the kitchen together. As all three thought leaders are dreaming up ways to pay homage to old world Eastern European dishes, she asked, “What got lost along the way?”

Alpern and Yoskowitz both agreed that seasonal ingredients were the driving force contributing to our grandparents’ cooking. But somehow, Jewish food from this region is mocked for being colorless and oil soaked. “Not true at all,” they discovered, as they scoured hundreds of old sisterhood and community cookbooks in the NY public library’s vast Jewish cookbook section.

Read the friendly banter between these authors in “The Gefilte Manifesto” and you’ll realize that in fact, foods from this region celebrated the seasons with bright fruit soups when blueberries were harvested in July. And while my Glitzianer grandmother surely did not massage kale with EVOO like I do, the authors remind us that plenty of seasonal greens were served. Summer/autumn produce including cukes, carrots, cabbage and other colorful veggies were naturally fermented by pickling, so they could enjoy crisp veggies (and healthy probiotic benefits) deep into the winter.

“We wanted to be playful within the confines of traditions” Alpern explained. This re-thinking of traditional dishes led them to contribute re-imagined gefilte creations at the James Beard House Passover celebrations in 2013 and 2014. Picture a layered fish terrine, deconstructed with colorful alternating stripes of herbed, salmon and leek fish mixtures, seasoned with herbs native to our grandparents’ Eastern European villages.

Alpern explained that she and Yoskowitz also wanted to take the cuisines out of the “holiday only” association many of us have. The foods they explore are generally everyday foods re-imagined and brightened for today’s home cook. So if you’re thinking about leaf-peeping in October, you may want to consider bringing along blueberry soup, sweet vinegar brined pickled trout and mustard slaw from their Latvian picnic menu. Don’t forget the lettuce kvass to whet your whistle after your hike. Pickled watermelon rind and cardamom pickled grapes would finish it all off nicely.

That said, the cover of “The Gefilte Manifesto” shows an artfully wrapped whole fish, gefilte’d (stuffed) the way our grandparents would have savored. After observing the sellout crowd noshing enthusiastically at last night’s event, I’m sure that many of them walked away sated and inspired to “cook the manifesto” this holiday season.

Liz Rueven is founder/editor of the blog KosherLikeMe.