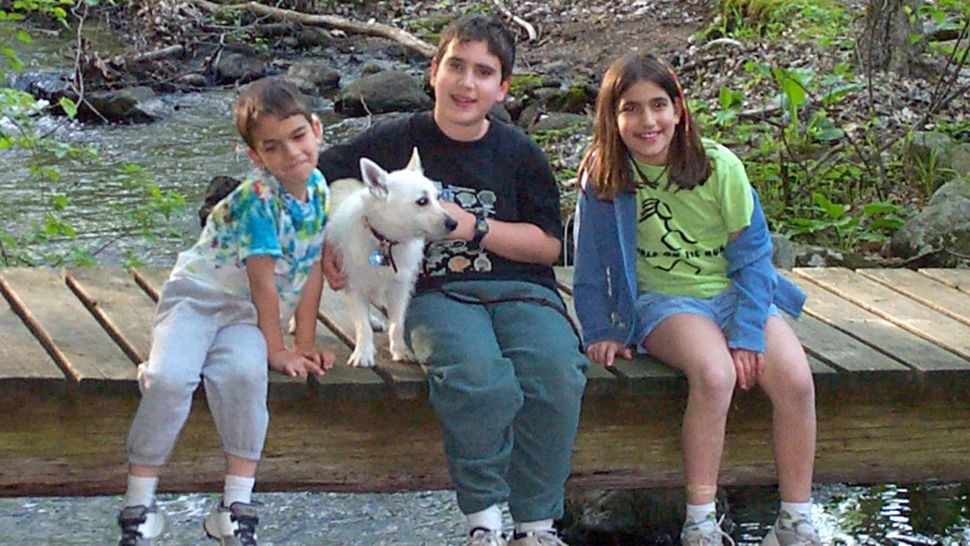 Rocki with his human siblings, circa 2001 Image by Janet Aronson

When I was eight, feeling inspired by Charlotte’s Web, I begged my parents to purchase a pet pig.

I argued that this was the perfect pet to teach me responsibility. Not to mention the fact that it would make me unbelievably interesting, and surely net me thousands of new Instagram followers. Except that this was before Instagram.

My parents eventually conceded to buying a dog, not a pig, for my brothers and me, on the condition that we take responsibility for it.

Excited to finally be getting a pet, I searched on www.petfinder.com, an online database for adopting pets from shelters — not because I saw pet adoption as part of Jewish ethics, but because it was convenient. Though my family ate mostly vegetarian and kept animal welfare in mind when purchasing meat, it didn’t immediately occur to me that adopting a pet from a shelter was in line with these animal-related ethics.

For many of us — particularly those who, like me, consider ourselves foodies — “animal welfare” automatically translates to ethical eating. There are increasingly more resources and options to buy animal products with labels like “grass-fed,” “humanely raised” or “free range.” While we look for those labels and certifications in our food products, it’s important to realize that animal welfare extends far beyond the food we eat.

Animal welfare, for example, extends to pets. Soon enough I found Rocki, a one-year-old terrier mix, in a shelter just a few towns away. We were his third home, and his strange phobias of tape measures, flyswatters, and men with beards gave us some inclination as to his earlier abusive treatment.

Unbeknownst to me, getting Rocki on petfinder.com made my family and me part of a wider consumer revolution sweeping the country and improving the lives of animals around the world. The Humane Economy, by Wayne Pacelle, President and CEO of the Humane Society of the United States, details the many ways that human creativity and ingenuity replaces exploitative, abusive behavior towards animals. Pacelle explains how antiquated, abusive practices like using circus animals for entertainment, breeding animals in puppy mills, trophy hunting, and unnecessary animal testing are on their way out, to be replaced with smarter alternatives in the new “Humane Economy.”

Petfinder.com is one part of this “Humane Economy.” Shortly after the invention of the Internet, innovative animal lovers were looking for a better way to find shelter pets homes and disrupt the abusive practices of puppy mills and conventional breeders. Previously, potential pet owners could either visit their local animal shelters hoping that their dream pet would arrive, or purchase an animal from a breeder, an expensive endeavor that carried the risk of buying from irresponsible sellers. This technology matched pet owners to rescues, and cut abusive puppy mills out of the equation. According to Pacelle, in the two decades that have passed since the website’s founding, “save rates” — the number of animals who are adopted rather than euthanized at animal shelters — have gone up from 28% to 90% at some locations. The Humane Economy is full of stories like these, stories of inspiring individuals who fight for animal welfare in ways that are both humane and economically feasible.

Though the animal welfare trailblazers highlighted in this book are not explicitly Jewish, care for animals is core within Jewish tradition. Pets are protected by Jewish law. In addition to the Talmudic obligation that we feed our animals before ourselves, pets and farm animals are obligated to perform the mitzvah of resting on Shabbat, and humans are permitted to break the laws of Shabbat to prevent unnecessary suffering to animals.

On this blog, we’ve discussed our obligation to care for animals by maintaining strong food ethics. Reading The Humane Economy reminded me of the many ways that animal ethics — and our related Jewish obligations — extend beyond food. Should households that are committed to cage-free eggs also promise to only adopt pets from shelters? If you generally purchase ethically-raised meat, why not extend your sensibilities to only buying beauty and cleaning products that weren’t tested on animals?

Wayne Pacelle makes a passionate case that that animal welfare-minded consumers can make real impact in the world, and his book is (unintentionally) steeped in Jewish values of justice that permeate the book of Deuteronomy, along will other collections of Jewish texts. Kashrut gets a lot of attention in Jewish thought. But our obligation to take care of animals doesn’t end with ethical kashrut.

Today, Rocki is a sixteen-year old dog, doddering and mostly blind, but happy after a long life with a family who loves him. And as an adult, I’m inspired by the simple things that I can do to make a difference in the lives of animals, by eating a vegan rice-veggie-tofu bowl for lunch or by sourcing free-range, ethical eggs from my local CSA. Small, daily choices like these are the first step in building a Humane Economy, for humans and animals alike.

Rachel Aronson is a Sustainability and Community Engagement/ JOFEE fellow working at Hazon. She has worked on a community farm, lived in an environmental co-op, and planted gardens on her fire escape to bridge her passions for building community and being around fresh-grown vegetables.