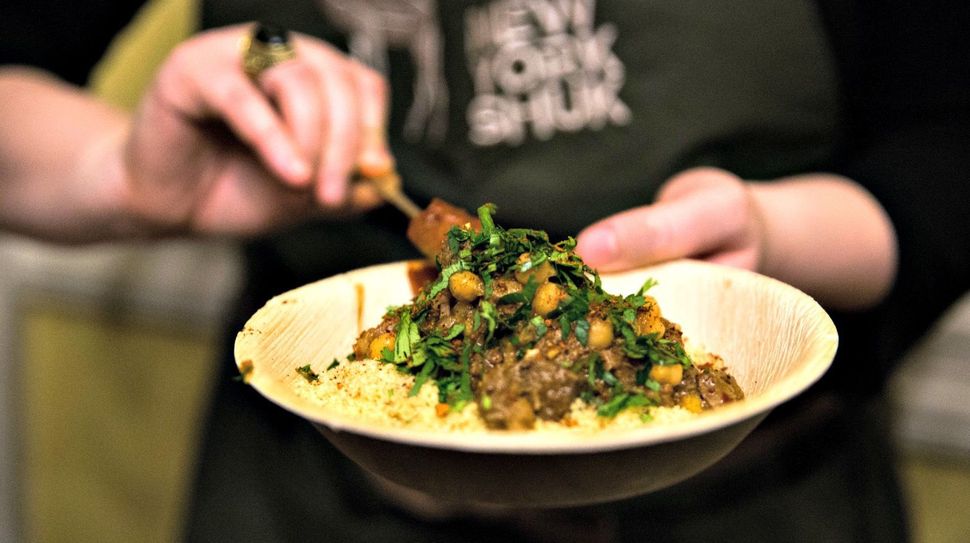 The smell of schmaltz-popped corn greeted the noisy crowd filing up the stairs of the Henry Street Settlement on the Lower East Side last week. The draw? A Moth-like storytelling event, with food, called “Schmaltzy: 5 dishes. 5 stories. So Jewish.”

The brainchild of Jewish Food Society founder Naama Shefi, the organization’s first public event consisted of a handful of local bubbies, chefs and food mavens telling tales of recipes that influenced their lives, followed by a feast for the standing-room only audience of hungry tasters. 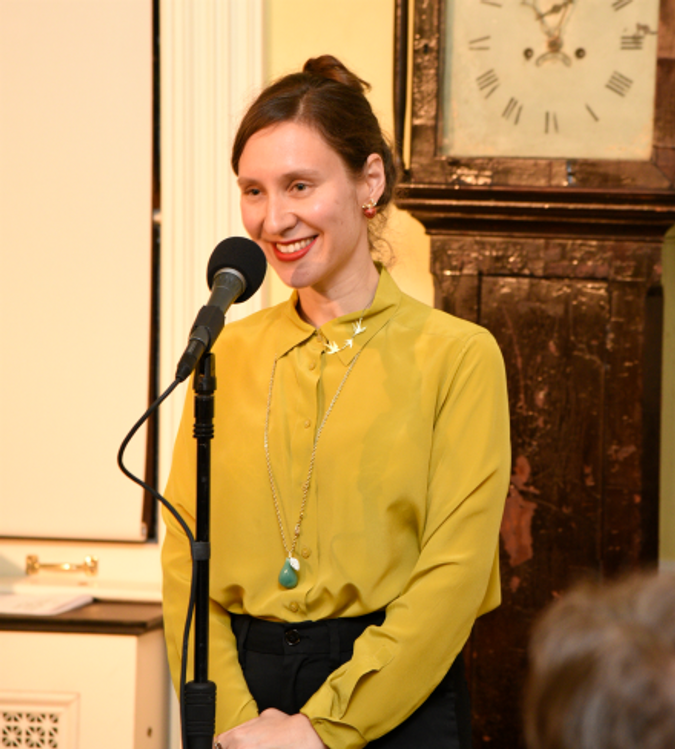 Supporting the Society’s mission to honor and revitalize Jewish culinary traditions, Shefi, along with Jewish Food Society Program Director Ellie Backer, developed the event as a way to showcase the diversity of Jewish food and culture in an engaging and meaningful way. She explained, “I believe that recipes carry with them the marrow of who we are as individuals, families and as a people, and the stories of where we come from.”

Mitchell Davis, executive vice president of the award-granting and food-leader-fostering James Beard Foundation, emceed with short jokes and anecdotes (and even a Tai Chi-style stretch) in between each chapter. He kicked everything off with a statement that captured the spirit of the evening: “Food without story is just calories.” 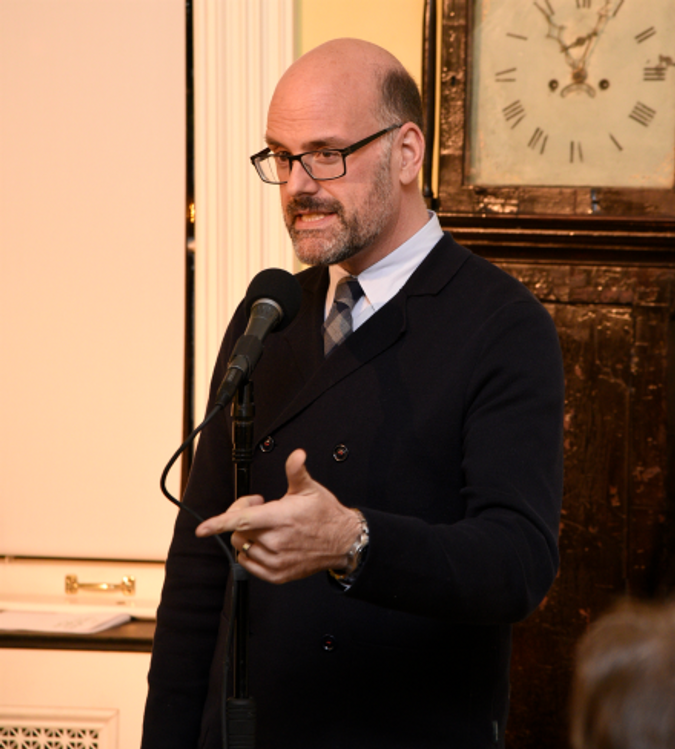 This sentiment made the event site that much more relevant. The Henry Street Settlement was established in 1892 — around the same time that Sydney Taylor’s “All-in-the-Kind Family” took place — as a community center providing social services to the mostly impoverished immigrant families who had settled in the area. The majority of these families at the time were Ashkenazi Jews fleeing Eastern Europe to live in overcrowded tenements in a New World shtetl. Lilian Wald, Henry Street’s founder, viewed the arts as being as essential to the human experience as food, shelter and clothing. It’s easy to imagine how she would have felt about Schmaltzy.

But, on to the stories and the treats.

While the name of the event itself — schmaltzy — might lead you to think that the stories would be overly sentimental, Shefi used the riff on chicken fat to send the message that the event was meant to be fun and playful, and wouldn’t take itself too seriously.

With titles like “Why Yemenite shabbos is good for your belly but bad for your social life” and “How a torch was passed from mother to daughter through a dumpling,” the narratives ranged from comical to touching to inspirational. 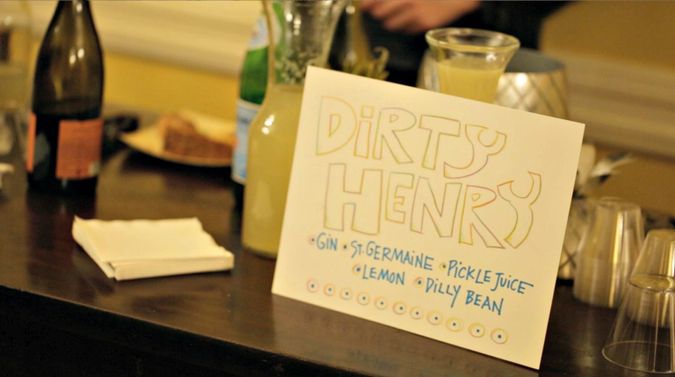 Though growing up in a non-cooking family, Liz Alpern related to food through Shabbat meals, and, inspired by a pastry in Paris, eventually started a challah-baking company in college. A few years later, she dedicated herself to revitalizing and reinventing Ashkenazi recipes, co-founding the Gefilteria and co-authoring The Gefilte Manifesto. At the event, Alpern developed the recipe for a “Dirty Henry” cocktail (gin, floral St. Germaine, pickle juice, lemon juice and a pickled dilly bean) and served roasted garlic–potato knishes with mustard.

Motivated by the produce his family grew in each new home as they migrated from Germany to Israel to the U.S., serial entrepreneur Idan Cohen recently founded Grow to help people raise their own food. He now cultivates tomatoes and cucumbers on his own rooftop and his daughter’s first word was גג — roof. Cohen prepared schichttorte, an Austro-Hungarian cake with layers of marzipan, coffee merengue and jam, a recipe that his grandmother carried from the old country and passed down through the generations. 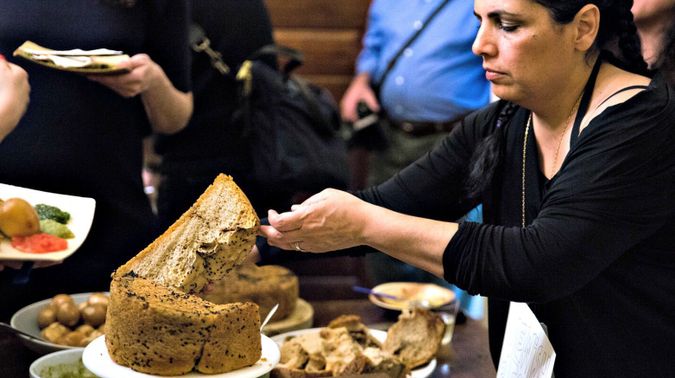 Even though her mother was the main cook at home, Chef Einat Admony, owner of Taim, Balaboosta and Bar Bolonat, remembers fondly her late father’s signature dish: the spicy Yemenite condiment s’chug that he made by processing garlic, multiple chili varieties and cilantro in a meat grinder. He was such a fanatic for the tear-inducing sauce that he brought it to restaurants (slipped into his wife’s purse) on the rare occasions when the family ate out. Admony served the Yemenite overnight-baked Shabbat bread kubaneh, alongside grated tomatoes, hilbeh (a bitter fenugreek sauce), tea-stained ten-hour eggs and, of course, a big dollop of s’chug. 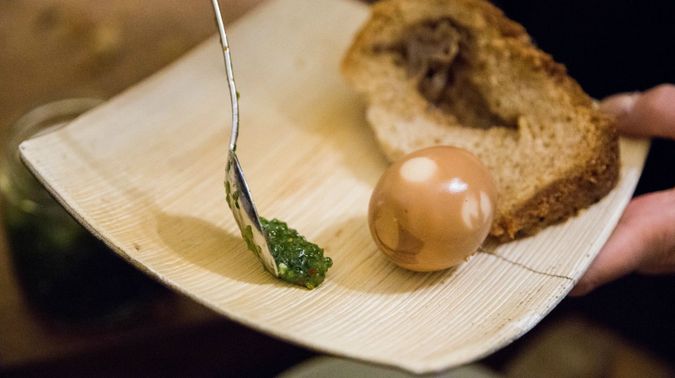 Growing up in Riga, Latvia, Anna Gershenson cooked traditional Jewish foods alongside her mother who, despite losing her family as a teenager, was always vivacious and fun in the kitchen at a time when the Soviet Union frowned upon holiday celebrations. Gershenson eventually moved to western Massachusetts — her mother, husband and daughter in tow — and became a caterer and culinary educator. After her mother passed away, one of Gershenson’s first catering jobs was to prepare for a local family a traditional Jewish meal for Rosh Hashanah. Given her passion for nutrition, whole foods and healthy eating, she adapted her mother’s beef kreplach with a lighter chicken filling for an American palate, and realized that she had now stepped into the role of matriarch of her own family. Gershenson shared her kreplach not only with the crowd at Schmaltzy but with readers of New York Magazine in a grandma versus grandma battle of the dumplings.

Ron Arazi grew up in Israel as part of a large Moroccan-Lebanese family, which meant that he never cooked for or ate by himself. When he and his wife, Leetal, a pastry chef and photographer, moved to Brooklyn, they found themselves sitting down to the Passover seder with as many diners as sons mentioned in the Haggadah, nostalgic for the hustle and bustle of a large table. To ward off the isolation of being in a new city and to share their culinary heritage, the couple founded New York Shuk, hand-rolling couscous in the nascent Smorgasburg outdoor food market. Through their couscous and cooking classes, the Arazis helped customers get a taste of home and surrounded themselves with a new community. They served their famous couscous with a tongue-and-chickpea stew and a healthy dose of rose-inflected harissa. 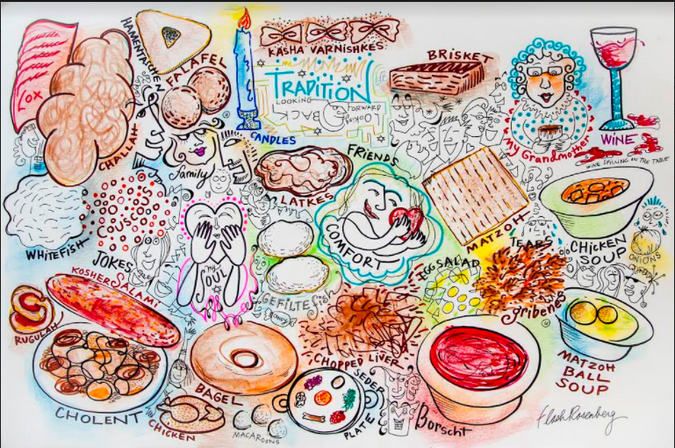 If you missed last week’s storytelling, the Jewish Food Society will be adding to its website videos, recipes and the visual representation of each teller’s story, drawn extemporaneously by illustrator Flash Rosenberg. A series of more Shmaltzy-like events is in the works. Who knows, maybe you’ll be up on stage next.