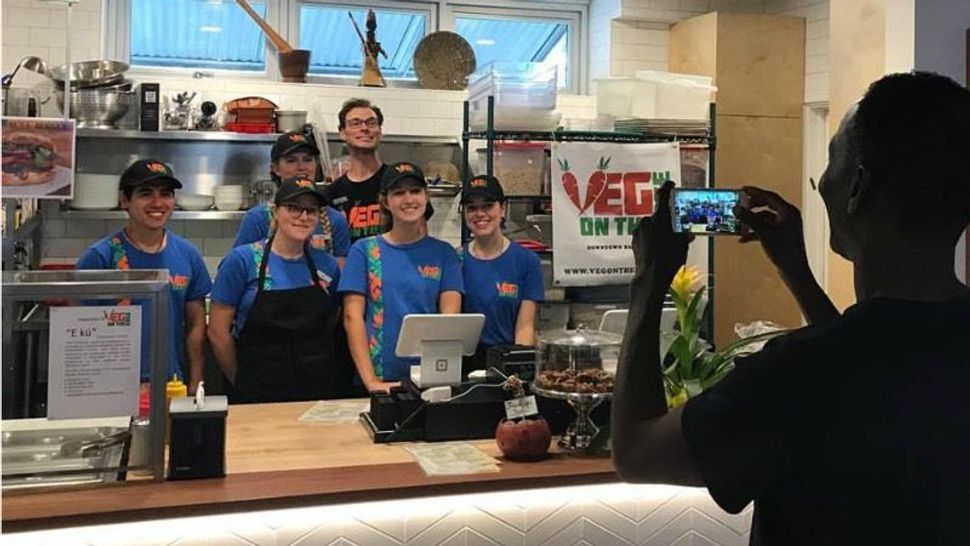 Image by Veg On The Edge/facebook

What do you get when you mix a kosher food wasteland, a Nigerian convert to Judaism and vegan cuisine?

No, that isn’t the set-up to a bad joke: Nigerian-born Akindele Bankole just opened the only kosher restaurant in Santa Cruz, California, a vegan eatery called Veg on the Edge.

According to an article by Alix Wall in JWeekly, Bankole grew up baking cakes for his family and friends. He was born in Germany, but was raised in Nigeria. As he got older, he became interested in Judaism and he moved to the U.S. He worked at McDonald’s for 25 years until, a few years ago, he settled in Santa Cruz, converted to Judaism, and decided to open a vegan restaurant.

Not only did Santa Cruz lack kosher cuisine, but the only Jewish-style restaurant in town is Noah’s Bagels, which was once kosher decades ago.

Indeed, Santa Cruz is so lacking in kosher amenities that the Santa Cruz Hillel wrote, “Even Costco has discontinued serving kosher hot dogs at its lunch counter.”

But Veg on the Edge may change that. Certified kosher by Orthodox Rabbi Chaim Leib Schneider of the Jewish Renewal movement, the restaurant serves vegan versions of West African cuisine. The menu is also gluten-free.

Located in a downtown food court called Abbott Square, Veg on the Edge serves a vegetarian version of suya, the national dish of Nigeria. Usually made with skewered grilled meat, Bankole replaces the meat with shiitake mushrooms. Among other items on the menu are moin moin, a mashed black-eyed-peas dish, and fried plantains.