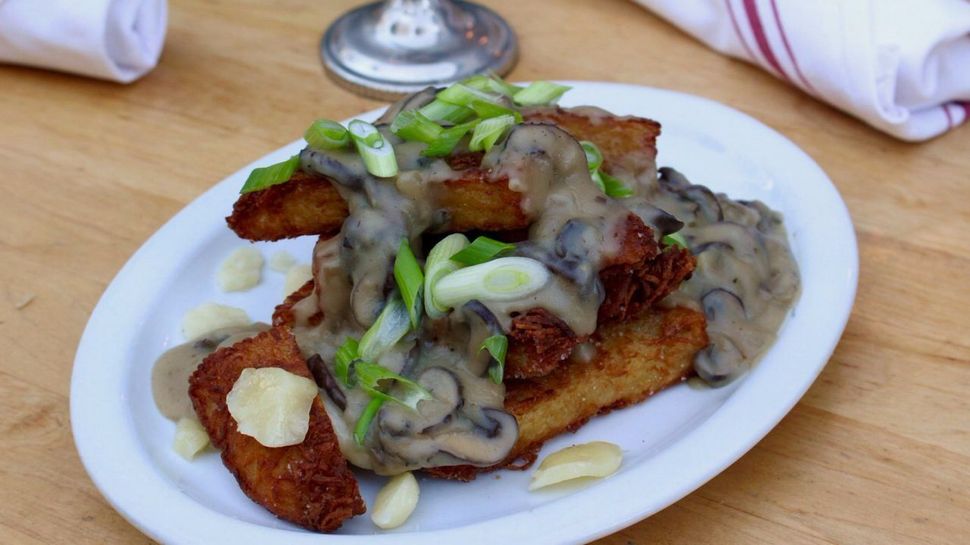 Adventurous latke lovers take note: 2017 is turning out to be the year of the magnificent mashup. We’re talking Indian-inspired potato pancakes in Wisconsin, latkes à la Quebecois (latke poutine!) in Brooklyn, and even a Tex-Mex rendition in Houston.

For each night of Hanukkah, there’s a crazy versions of a latkes to sample:

Latke Poutine at Mile End Deli, Manhattan and Brooklyn
Philedelphia chef Yehuda Sichel’s not the first to create latke poutine, a Semitic spin on Quebec’s junk-food classic. We discovered it at Montreal’s now-departed Deli Sokolow in 2015. But Sichel, chef at Mike Solomonov’s great Abe Fisher, has created a miraculous version for Brooklyn’s Mile End, where he’s guest-starring this month. Think latkes, mushroom gravy, scallions and cheese curds, all in a glorious pile. “When it comes to poutine, the biggest potential threat is soggy fries that structurally don’t hold up well with gravy. But with latkes, which are crispier and a bit thicker, they hold up really well,” Sichel revealed to the Forward.

Latke Mulligatawny at delecTable, Madison, Wisconsin
You’ll have to get to Madison on December 16 to try this one: Chef Kristin Williams is whipping up Indian-inspired latkes at this new hotspot for a one-night-only event she calls “Culinary Dinner Theater.” Williams didn’t respond to requests for comment, but “mulligatawny” is a play on the Tamil for “pepper water,” so these should be smokin’. Smoked trout, dill crème fraîche and cranberry-apple balsamic reduction will accompany. 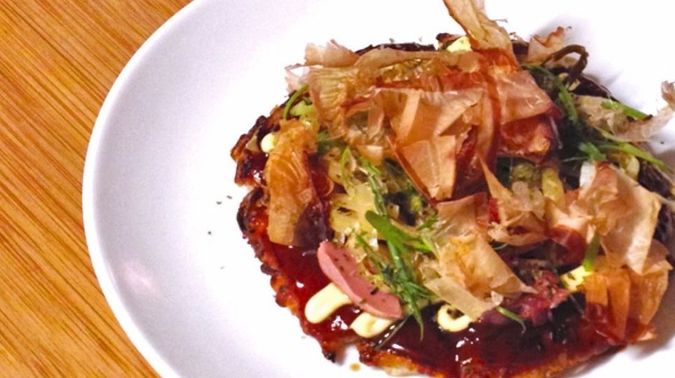 Okonomiyaki Latkes at Shalom Japan, Brooklyn
The pancake-like Japanese street food okonomiyaki — literally, “as you like it” — has popped up on a few NYC menus, but this Brooklyn ”Jewpanese” is giving it a Hanukkah spin. Chef Sawa Okochi’s potato-heavy version gets topped with salmon roe for a totally luxe holiday treat.

Latke Reuben at Shelsky’s, Brooklyn
So you can’t order this at Shelsky’s; the latke reuben is the appetizing shop’s entry for 2017’s ninth annual Latke Festival at the Brooklyn Museum. But we couldn’t resist sharing this caraway seed-studded potato latke, stuffed with Riesling-braised sauerkraut and Swiss cheese, topped with corned beef and Russian dressing, as amNY describes it.

Israeli-Style Latkes at Mama’s Vegetarian, Philadelphia “I have to warn you, they’re not traditional latkes,” a server cautioned a Philly blogger at this Center City Israeli spot. Amen to that. The latkes come loaded with grated carrots, celery, onions and tons of other vegetables. They’re offered solo, in a pita with traditional falafel dressings, or piled on a platter with hummus.

Rabbi’s Ramen at Rice & Gold, New York
Yes, we know it’s not latkes. But star chef Dale Talde’s only offering this matzo-ball/ramen Jewsian mashup through Hanukkah. “Jewish deli food is one of the cuisines that most defines this city, so what better way to represent the holidays in New York than a matzo ball-ramen fusion dish?” Talde told Metro. “Instead of being made by your Jewish grandmother, it’s made by a few Filipino and Korean chefs.”