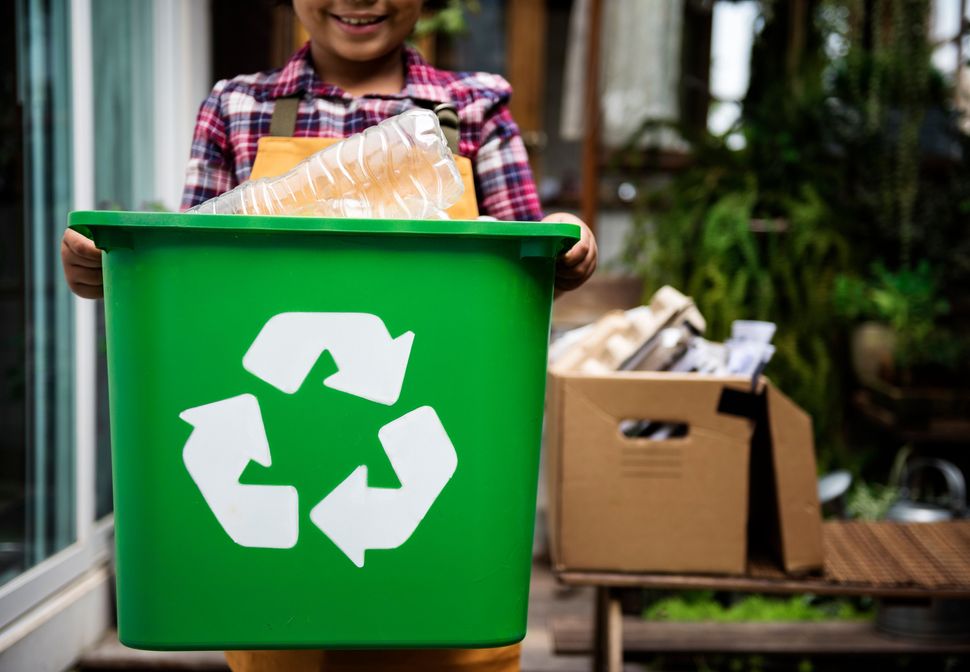 Amanda Lindner has a jar of trash. It’s not a big jar and it’s not a big amount of trash. In fact, in this five-inch jar is all the trash she’s created in the past five months. When Lindner moved into her first solo apartment in Prospect Lefferts Gardens, Brooklyn, she committed to a zero-waste journey. This meant no toilet paper, no disposable water bottles, no takeout containers, and almost no garbage. A good chunk of her trash jar is filled with packing tape from when she moved, before she discovered the magical strength of paper packing tape. There’s food wrappers, a cut up credit card, some candy bar wrappers. But that’s it. 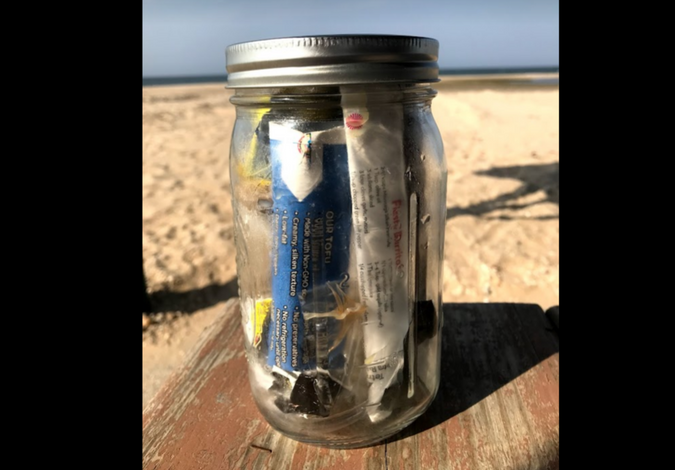 “Completely zero waste is impossible for anyone,” Lindner tells me. “I do create trash. But this is the trash I’ve created. If I do accumulate some piece of trash, I’ll stick it in my bag to bring home and put in my jar. I don’t own a trash can. This jar is my trash can.”

Her intense stance on not wasting earned her a spot in the New York Times Real Estate section. One thing the NYT didn’t mention in the piece? Her commitment to this zero-waste journey was part of a Jewish environmental justice issue, inspired by her Avodah Justice Fellowship.

What’s particularly Jewish about not wasting? “I really feel strongly that justice is a Jewish value. For me, there are a lot of justice issues I care about, but I really feel like you can’t stand for much of anything if there is no planet to stand on. Our planet is the one thing every single one of us shares, that every single one of us needs. It doesn’t matter what your skin color is, what language you speak, your citizenship status…we all need to live on the planet,” she tells me. 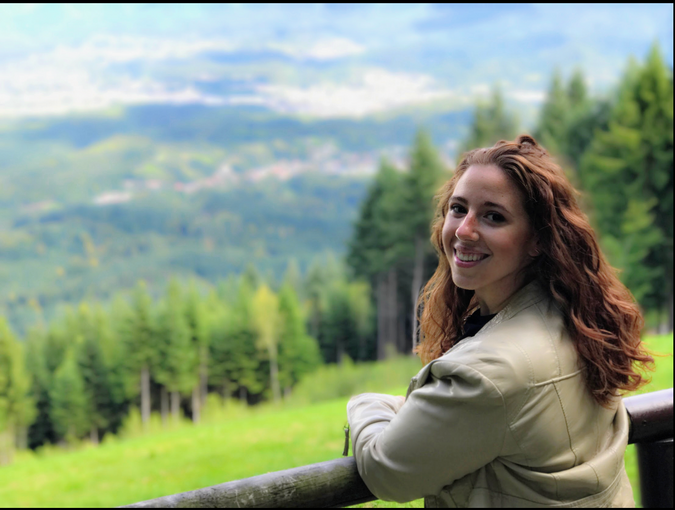 There’s a lot of Jewish thought about being mindful of our shared earth. When a person establishes themselves somewhere new, they’re supposed to plant something that will grow fruit – with the idea that it will be there for future generations. “What we have now is because of what previous generations did for us,” Lindner says. “The trees we have today are because someone planted them seventy years before us.”

Even in wartime, you’re not supposed to harm a fruiting tree, according to Jewish texts. There are rules about not wasting even a crumb. “We don’t inherit our earth from our ancestors,” she said, paraphrasing Rabbi Rachel Timoner. “We steward it for our children.”

As a steward of the earth, Lindner chose to embark on a zero waste lifestyle, but some things were harder to give up than others. Toilet paper was a tricky one. Lindner does use toilet paper, but she uses toilet paper individually wrapped in paper, made from recycled paper. She purchases it at bodegas and dollar stores. Otherwise, if you go to her house there are no paper towels and no napkins. Lindner eschews fast fashion, thrifting everything. She rarely buys anything new “unless it can be returned to the earth.” Everything is recyclable and washable, and she’s planning to reuse it until she can recycle it.

Coming to Whole Foods with her own bags is a conversation starter for Lindner. Coming to coffee shops with her own mug occasionally prompts pushback, but Lindner’s come up with a solution. “Tell them you’re allergic to plastic,” she whispers to me. “The polyurethane in it.”

While counting the Omer this year, Lindner decided to count her trash in a jar as a way of taking personal accountability for the environmental damage she created.

Lindner grew up Reform, in an immigrant community in one of the poorest areas of Long Island, in a temple where the Omer was not practiced.

If she didn’t have a farmer’s market now, or a subway, if she was working three part-time jobs, if she was just trying to get through life, Lindner recognizes that what she’s doing would be incredibly hard to do. “Because I have the ability to do this, it should be me,” she says. “This burden shouldn’t be on people who already have so much to do in life.”

From regrowing lettuce from dinner scraps to barrels for rainwater collection to colorful pictures of hauls from the Farmer’s Market, Lindner, who blogs under Enviromensch, offers helpful tips to her readers on living a sustainable lifestyle. She gets messages all the time about people who turned down plastic straws because of her. “Just from one person showing that there’s another way, thousands of straws won’t be dumped into the ocean this year.” Like did you know many tea bags contain plastic? On one post Lindner explained how she switched from tea bags to loose leaf teas, proudly showing a picture of her new $5 tea diffuser on her site.

Being a modern activist has an element of hypocrisy to it. You go out and protest an oil pipeline or drilling, and come home and drink from your disposable water bottles. Leading a lifestyle where you absentmindedly subsidize the industry you are protesting is so natural, so intuitive, that it seeps into every element of your lifestyle without realizing it. Not for Lindner. She’s off the grid. Corporations might want her to purchase pads and tampons, made with bleach and packaged in plastic, but Lindner waxes poetic about menstrual cups.

Lindner’s tip for people interested in the lifestyle? “Actually go through your trash. See what you’re using on a daily basis. See what you threw out that you only used for thirty seconds and now it’s going to be on our planet for the next four hundred years.” Does she really think small changes can make a difference?

“Well, what’s one straw, said eight billion people,” Lindner tells me. “When you put it into perspective of how many people on this planet are using items that might or will destroy the earth.

Living Lindner’s lifestyle involves a lot of planning. She has to know when she’s going to the grocery store so she can have all her jars and bags with her. But that’s something very Jewish. “You plan ahead for Shabbat, you plan ahead for Passover…you’re always conscious of the passage of time. It’s being mindful of what’s a real want and what’s a real need.”

As a woman living alone in New York, Lindner has found her journey freeing, to be “able to say no to something that is going to cause more harm than good. To know I’m causing the least amount of environmental damage possible as one human being.”

And she isn’t the first one. There’s a small sect of women who’ve committed to a no-waste lifestyle. There’s Lauren Singer, of Trash Is For Tossers who has a five-year-old accumulated trash jar even smaller than Lindner’s, and there’s Bea Johnson of Zero Waste Home, who travels the world lecturing on the glory of waste not, want not.

“People are waking up to the fact that our current lifestyles are not sustainable,” says Lindner. “You can blame a lot of this on corporations but you have a voice where you spend your dollars. Every time you spend a dollar to buy a plastic fork or a piece of fast fashion, you are supporting that industry. The market follows the money. If you were buying sustainable, renewable items, the market would follow you.”

Another plus of being zero-waste is the money and space Lindner saves. “Everything saves me money,” Lindner says. “Not having to buy a new water bottle every time I’m thirsty. Bulk stores. Menstrual cups.” She’s had hers for three years. “There’s a tax on a lot of products simply because they’re made for women,” says Lindner, referring to what is now known as the Pink Tax. “I think that’s bullshit.” Living waste-free in a small, New York City apartment where space is at a premium is also a massive plus for Lindner. “You wouldn’t believe the space,” she tells me.

So what’s in Amanda Lindner’s bag? Compostable dental floss in a glass bottle (plastic is only recyclable one time, while glass is infinitely recyclable), a bamboo toothbrush (bamboo can grow six feet in a day), organic cotton handkerchiefs, a reusable tote bag, a bamboo tableware utensil set, complete with foldable chopsticks and a reusable straw, and a thermos made of cardboard. “I’m not giving it up,” she tells me. “Now that I’m so much more aware than I was five months ago, there’s no way I could go back.”

Amanda Lindner is a steward of the earth. In fact, we all are, even if we don’t quite know it yet.

Shira Feder writes for the Forward. She’s at [email protected]