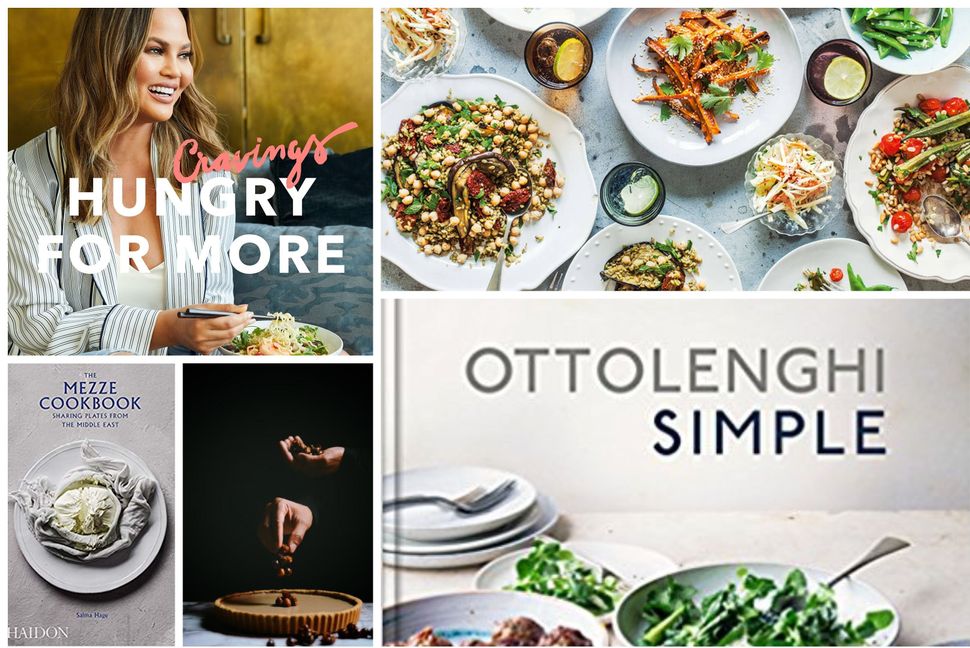 This cookbook is an ode to leftovers, created by a woman who understands that social change begins at the table. What’s being served? Who gets to sit at these tables? Turshen answers these questions in her subtly pro-sustainability cookbook that tells you not only how to cook your food, but what to do with your leftovers afterward.

This book might be little, but the subject matter it covers is far from it. From mrouzia to tagine, this cookbooks covers the gamut of global Jewish cuisine in a friendly, accessible way. Koenig continues her stellar streak of 10 years of writing about Jewish cuisine with this newest, friendliest addition to her ouvre.

Chrissy Teigen may not be Jewish, but her love for Israeli cuisine says otherwise. In her newest soon-to-be bestseller, she joins forces with Adeena Sussman to create a tome of fresh, colorful, easy to make foods.

As beloved chef Yotam Ottolenghi’s star continues to rise to stratospheric heights, he is taking Middle Eastern cuisine with him. Get in on the action by getting his new cookbook, dedicated to these vibrant, flavorful foods. The recipes might be simple, but the results are anything but. Braised Eggs with Leeks and Za’atar for brunch, anyone?

She’s a legend when it comes to professional baking, and now she’s opening her bag of tricks to share with this us in this newest bakebook venture. Designed for everyone from novices to old pros, these simple recipes come complete with instructions for mise en place and photo by photo instructions. This trove of essential recipes is the gift that keeps on giving, from recipes for sublime Chocolate Sheet Cake with Ganache Frosting to instructions for deceptively simple Peanut Butter and Jelly Thumbprints.

6.The Mezze Cookbook: Sharing Plates from the Middle East Hardcover by Salma Hage – out September 10, Phaidon

Mezze is made to be shared, and so is this cookbook. While exploring diverse dishes from all over the Middle East, discover how to eat like a Turk or Iranian. Not a meat eater? No problem! Along with meaty mains, this book features a selection of vegetarian or fish-based recipes for the ex-carnivores among us. People have been enjoying mezze style eating for hundreds of years. Sounds like it’s time for you to start.

7.Comfort in an Instant: Comfort Food Recipes for Your Pressure Cooker, Multicooker, and Instant Pot by Melissa Clark. – out October 16, Clarkson Potter

New York Times food writer Melissa Clark knows how to write about food. And she understands, more than anyone, the value of easy, nourishing comfort food. Clark’s new cookbook, in which most recipes take less than an hour to create, is a treatise on delicious convenience. From recipes for Classic Matzo Ball Soup, otherwise known as the Jewish penicillin, to Pimento Mac + Cheese, use this cookbook to spend a few minutes a day making the foods you love, that have always reliably loved you back.

Billing itself as containing recipes from ‘here, there and Paris,’ Everyday Dorie boasts a plethora of recipes from this James Beard award winning writer. What makes a Dorie recipe unique is the small surprises tucked into each recipe, from the Thai aromatics in her clam chowder recipe, to the Cannellini beans in cod en papillote. Dorie’s cooking has oft been feted on social media by her hundreds of thousands of followers. Join the people lauding her culinary know-how and cook like the expert herself, with the help of this newest cookbook.

9.Cook Like a Pro: Recipes and Tips for Home Cooks by Ina Garten – out October 23, Clarkson Potter

Before she was the Barefoot Contessa, she was Ina Rosenberg from Brooklyn, New York. Now she’s a global sensation with a loving grip on everyone’s hearts – and taste buds. “”You don’t have to be a pro to cook like one!” Garten says, and this cookbook is all about that, making it its mission to make home cooks interchangeable with professional ones.

This cookbook offers a new way to think about flavor in a big way. These unexpected recipes will get you curious in the kitchen, as “Season” takes you on a global journey everywhere from California to the Middle East. You’ll be itching to get into the kitchen after glancing at “Season’s” glossy, gorgeous photographs. In Sharma’s new book, everyone is welcome at the table, just in time to have some deviled eggs with tahini and za’atar.

It’s been a while since Michael Solomonov released Zahav and changed the public face of Israeli cooking. Now he’s following it up with a book that is all about Israeli classics that the authors have adapted for the home cook. Solomonov and co-author Steven Cook traveled all over Israel, exploring popular street food and regional recipes handed down through generations, highlighting the wide variety of culinary influences that make up the soul of Israeli cuisine.

In the follow up to the “Zahav” cookbook, Chef Michael Solomonov and Steven Cook embrace the informal and simple food of a nation and its people in “ISRAELI SOUL: Easy, Essential, Delicious”. Timed with the anniversary of Israel during the year of its 70th birthday, the book not only shows how food has shaped the soul of Israel, but also brings that deliciousness home to the American kitchen. ?Pre-order your copy through the link in our bio. Officially on-sale OCTOBER 16TH! #IsraeliSoulCookbook