At the 12th annual Food Film Festival, Jewish food took center stage. In a room filled with people who paid top-dollar for a movie experience that ignited all their senses, along with brisket, arrosticini, and monkfish tail — cholent was on the menu.

“What is this choo-lent?” asked George Motz, festival founder, to raucous audience laughter. The cholent was served in conjunction with “Holy Smoked,” a film about the only kosher steakhouse solely dedicated to barbecue, Izzy’s Smokehouse, operating out of Brooklyn’s Crown Heights.

Sruli Eidelman, who now goes by Izzy because his non-Jewish employees tended to mangle the name Sruli, is a proud Lubavitcher Hasid. “We awaken the soul, and barbecue is kind of like food for the soul,” he said at the screening.

Eidelman’s barbecue awakening came after trying some of the food at the kosher pop-up The Wandering Que. He found himself in a peculiar quandary, as he was desperate to try the foods he was reading about, but was unable to, due to kosher restrictions. He embarked on a trip across the Midwest, to meet barbecue owners and discuss tricks of the trade with them. “He didn’t want to try my food, but he was alright with drinking my whiskey,” said Aaron Franklin, Texas’ Franklin Barbecue owner. “I said to myself, that’s someone I could get along with.”

At the afterparty, Eidelman stood behind a table, dishing out pastrami to the starving masses. “The mayonnaise…it’s a Jewish touch?” asked a Frenchman. Everyone was too busy scarfing down their morsels to answer. 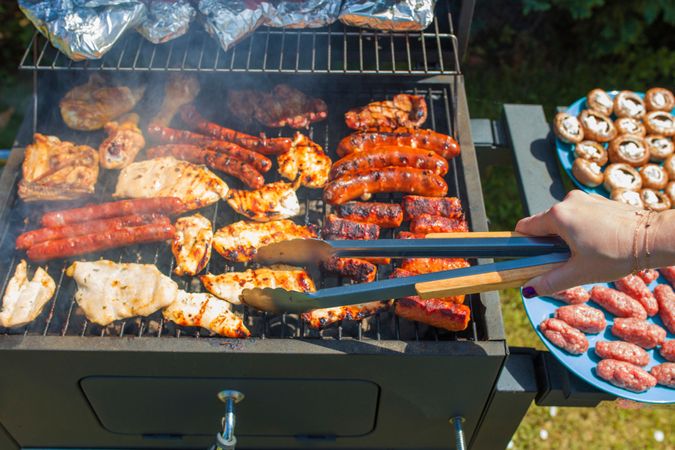 The other films were equally good, from “The Science Of Smoked Brisket,” (spoiler alert: brisket benefits most from slow, languorous cooking), to “Melt: A Smoking Story,” about two Frenchmen setting up a Texas-inspired barbecue shop in Paris, but one has to question the absence of women in the festival.

For centuries, cooking was a thankless domestic task designated for women. Now that cooking’s experienced a resurgence, especially when it comes to the hyper-masculine cooking with fire that is barbecue, men are elbowing their way to the front. The most famous pit-masters are men, the people who publish the barbecue cookbooks are men, and four out of five of the respectable judges at the venerated Food Film Festival are men.

In fact, even as men have elbowed their way to the front of the grill, the art of the slow-cooked Shabbat stew has also been largely overtaken by men. Synagogues have cholent cookoffs put on by their men’s clubs, and cholent is seen as one of the few things a man cook while still retaining his ‘macho’ status.

The one exception to this disappointing trend? A film called “No Such Thing As Bad Pie,” but even there, the closest Karen Barker (of Durham, North Carolina’s now defunct Magnolia Grill) got to cooking with fire was opening and closing an oven to put a lemon chess pie in it.

It’s lovely that kosher is getting its time in the spotlight, but if the future of cooking meat is all men, count me out.