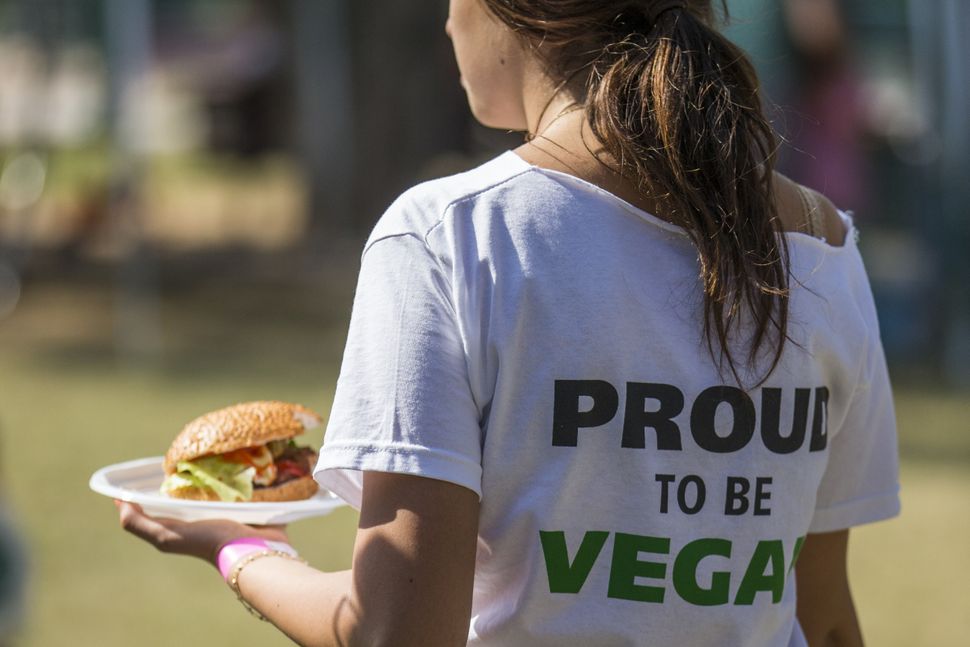 A woman, wearing a shirt reading ‘proud to be vegan’, carries a vegan hamburger during the ‘Vegan Fest’ fair in Israel. Image by AFP PHOTO / JACK GUEZ, Getty

In a recent Chef’s Table analysis of world-wide vegan habits, Israel was ranked 6th for the second year in a row, with a Vegan Popularity Score of 78. This is no surprise, considering that at least 5.2% of Israelis follow a vegan diet, and even fast food pizza brand Domino’s decided Israel was the place to launch its vegan pizza line.

But in mapping out the 10 countries in which veganism was most popular, and comparing it with the Jewish population, a question must be asked: Are countries with a higher Jewish population more likely to be vegan? What percentage of Jews are vegan?

“If you look at the countries where veganism is very popular, they all have a few things in common,” Corina Onet, who created the Chef’s Table analysis, told the Forward. “They’re usually cities with a young, hip and educated population. Many are university cities or cities with a large population of artists and people working in creative industries.” This concurs with the most recent Jewish demographic data of Jewish Virtual Library, which states that “the vast majority of Jews (97%) live in urban metro areas surrounding cities.”

So are countries with lots of Jews more likely to be vegan? According to the data – that sounds about right.