The finished product of the goat skins, turned to klaf. Image by Adamah Farms

For years, production of the klaf, the parchment used for mezuzahs, was outsourced to companies in Israel, or in the Hasidic parts of Brooklyn.

“We eat the meat, we eat the organs, and now we’re using the skins,” says Shamu Sadeh, the director of Adamah farms, who previously called himself a “goat meat advocate,” believing that his goats were the key to a sustainable future. At Adamah, the goats are now more sustainable than ever, as every part of the animal, from the meat to the skins, is now used for a purpose. “We don’t want to waste anything of the animal,” he adds. Before 2018, Adamah simply disposed of its goatskins.

At Adamah, a farm focused on organic agriculture and Jewish learning, Sadeh believes the key to living sustainably is goat meat, which is both the healthiest red meat and the least wasteful, with smaller-scale slaughter. All proceeds for the mezuzahs will go to Hazon, Adamah’s parent non-profit organization. And why klaf? “Oh, Linda’s been telling us to do this for years,” says Sadeh.

Adamah’s klaf project was inspired by Rabbi Linda Motzkin. In 2003, Motzkin began using donated deerskins to write her own Torah. Making a Torah scroll is not an easy undertaking, with prices starting from $100,000, according to Stam Scribes, and taking upwards of 12 months of full-time work. Luckily for Motzkin, in her town of Saratoga Springs, New York, hunting is one of the most popular pastimes, with whole websites dedicated to it. “All I had to do was put out the word in the community to ask hunters to give their hides to the rabbi instead of throwing them in the garbage,” she says. 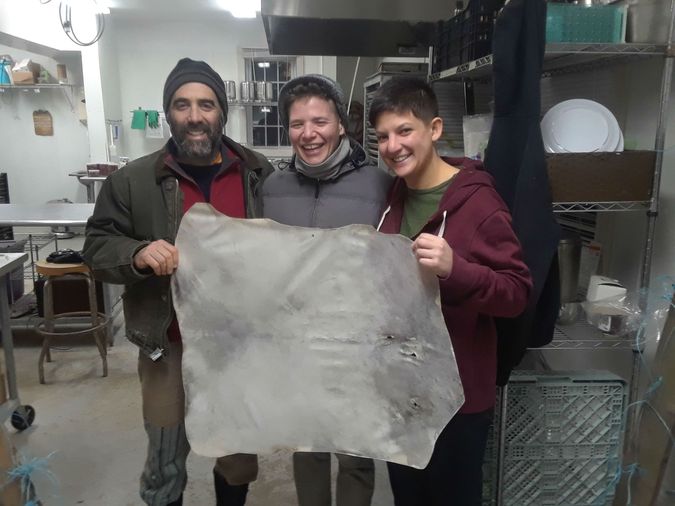 “Never turn down a deerskin, you can make it parchment,” Motzkin’s mentor Eric Ray told her. Motzkin has received well over one hundred by now. The Community Torah Project, which is what Motzkin calls her work-in-progress, grew out of her desire to write a Torah in her lifetime. It was difficult for Motzkin to find scribe supply shops willing to sell klaf to her, as a woman, so she resolved to make her own parchments.

When Motzkin finishes her Torah, she’ll be one of a handful of women who have written entire Torah scrolls by themselves. Motzkin estimates she’s the only scribe in the world making her own parchment to create a Torah scroll, from scratch.

Motzkin’s story served as a model for Simcha Halpert-Hanson, who started the klaf project at Adamah using an outline Motzkin gave them. “I found a lot of meaning when I witnessed the slaughter,” Halpert-Hanson said. “I had a relationship with the goats. I’d seen them grow up.” To Halpert-Hanson, this was a “modern korban,” a reimagining of the animal sacrifices Jews used to give in their ancient holy temples.

“We’re not in connection with how we get our meat anymore,” said Halpert-Hanson. “When they brought in the slaughterer, it was a full-circle experience.”

Made with Visme Infographic Maker