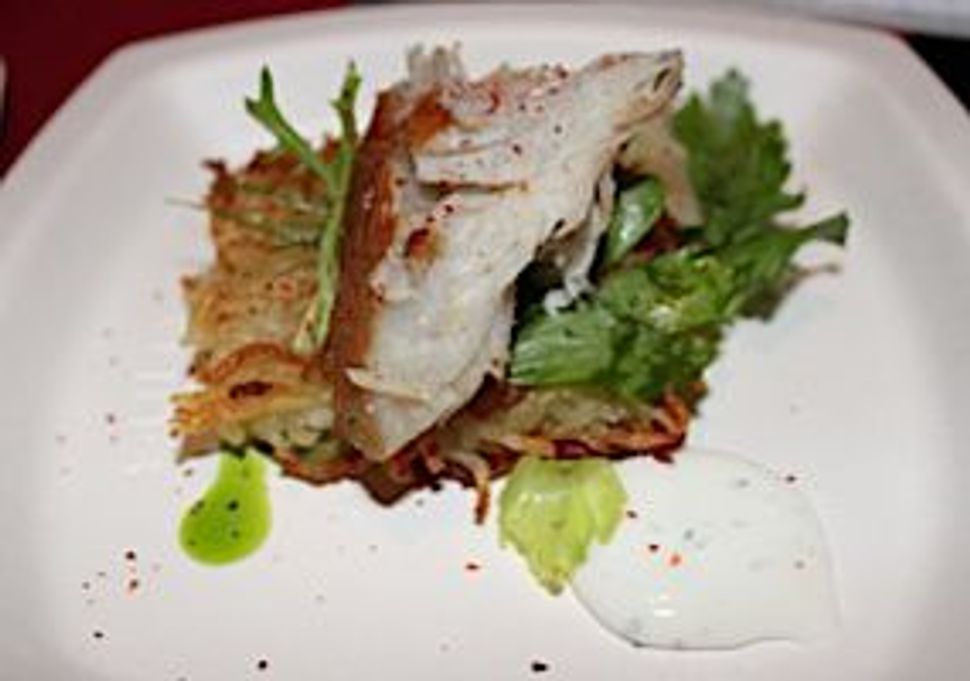 With the recent opening of Kutsher’s Tribeca, which bills itself as a modern Jewish-American bistro, much of the New York food world has been abuzz with talk of whether Jewish food can be gourmet. New York magazine and Chow.com took on the question this month, both citing Kutsher’s gefilte fish, which is made with poached wild halibut and topped with micro greens, as an example of the cuisine’s gourmet potential.

Food writers and avid Jewish foodies, however, seem unsure if Kutsher’s has accomplished this in this one dish — and perhaps it’s because they’re looking at the wrong food. While certain humble Jewish foods like gefilte fish, may never “go gourmet” — and arguably shouldn’t — others with more versatile ingredients lend themselves well to being elevated to gourmet status. Latkes, which at their most basic call for only five ingredients — potatoes, onions, oil, matzo meal and eggs — but exist in countless iterations fall cleanly into this category.

The winners of last night’s Third Annual Latke Festival, which pitted 17 chefs’ latkes against one another at the Brooklyn Academy of Music, proved that. The judge’s and my personal favorite, prepared by Jason Weiner from Almond restaurant, topped a classic and delicious latke with a superb house-smoked blue fish and goat yogurt. The latke was inspired by his grandmother’s recipe and his great uncle’s passion for fishing blue fish.

Bill Telepan’s artful latke, which was awarded the people’s choice award, was elegant in its simplicity: Potatoes were mixed with celery root and topped with a tart apple sour cream. Kutsher’s also offered up a flavorful, if slightly less well executed, latke, topped with chanterelles, maitake and black trumpet mushrooms and house-made herb ricotta.

Execution will take you a long way with latkes. A superb latke must be crisp on the outside with pillow-like fluffiness on the inside, which comes almost solely from technique (for some technique suggestions see here).

However, traditional latkes, no matter how well executed, can become uneventful year after year. So it is creativity and changing of flavor that takes you the rest of the way. Many of the most intriguing and flavor-packed latkes last night came from chefs who reached far outside the realm of Ashkenazi flavors, incorporating Chinese, Caribbean, Turkish and Latin ingredients into their offerings. “A latke is more of a canvas, that you can add your identity to,” Leah Koenig, Forward Ingredients columnist, said to me at the event.

The Vanderbilt’s Sam Bolton created a latke inspired by his neighborhood’s Afro-Caribbean community with curry-spiced sweet potato and kale, topped with a oxtail marmalade and pickled chilies. Dorie Fern, an avid home cook who won a spot in the festival in an earlier competition, topped her duck fat-fried latke with duck confit cooked in five-spice and garnished Chinese mustard and duck sauce, which she joked embodied the “convergence of Christmas and Hanukkah — Chinese food.”

For the most part, these latkes, while more creative and flavorful, weren’t executed as well as the winners which took a more classic approach and focused on technique. Mixing spices into your traditional potato latke to add heat and dimension may be the perfect compromise. While still concentrating on technique in a recipe you already know and love, “You could add ginger, garlic, chilies, or you could do curry,” Bolton said.

Gourmet or not, a good latke with a slight twist each year is worth its weight in oily gold.

Share your favorite latke recipes and ideas with us in the comments.

Courtesy of The Vanderbilt

When you finish squeezing the sweet potatoes and onions, throw them into a large mixing bowl and fluff them with your hands and spread them out. Sprinkle the potato starch, curry, and kale evenly over all of the potato mixture and gently fold together. The idea here is to get each little thread coated in the potato starch, if you need to use more, use more. Add the egg and mix well.

Heat a non-stick pan with your frying fat of choice (We use a 50/50 blend of chicken fat and clarified butter, but kosher options work as well), enough to coat the entire surface of the pan. Form your latkes, season both sides with salt, and fry to a crispy and beautiful golden brown.

Toast all the spices in a dry pan over medium heat for about a minute, then grind together in a spice grinder.

Rinse the cure off the fish. Refrigerate uncovered for another 24 hours to dry the fish.

Smoke the bluefish with the apple wood chips for 2 hours at 150 degrees.

The fish should have a pleasing firmness and amber color. If it doesn’t keep smoking ‘till it does.

Refrigerate the fish immediately. After an hour coat the fish with canola oil and wrap in plastic film until ready to serve.

On low heat, gently sauté the onion in the duck fat until the onions are translucent. Then set aside to cool. Don’t drain the fat! Meanwhile, shred the potatoes either by hand or mechanically (depending on the look you want to achieve).

In a kitchen towel or apron, thoroughly squeeze out the potatoes until they yield no water. In a mixing bowl combine the onions, potatoes, starch, eggs, salt and pepper with your hands. After all the ingredients are well incorporated, fluff up the mixture with your hands.

Heat a heavy bottomed non-reactive skillet. Add the canola oil, when it starts to shimmer, add piles of the latke mixture to the pan. When they begin to brown, flip with a spatula and gently press them down. When the other side is ready, drain them on a cookie sheet outfitted with a multiple layers of paper towels.

For the Dill Yogurt

In a bowl, mix all ingredients

On 8 warm plates lay 2 pancakes on each plate.

On top of the pancakes place a few chunks of bluefish. Make sure to discard the bloodline, it can be overly fishy.

Drizzle the yogurt sauce around the plate and on the bluefish.

Garnish with some dressed frisee, microgreens, or chives.