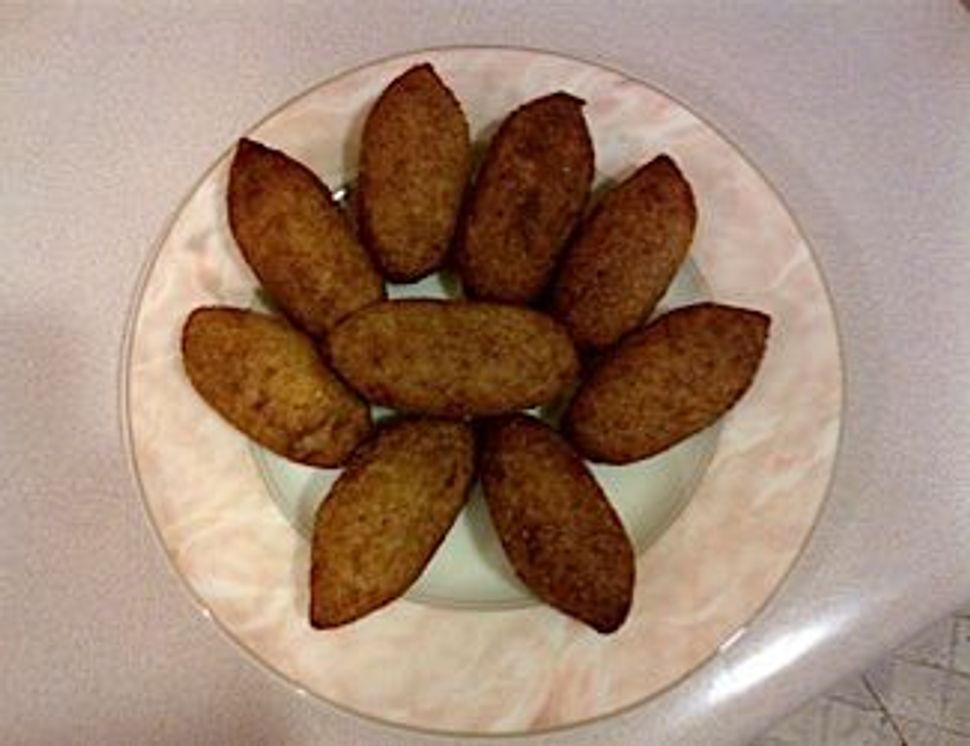 Image by Courtesy of Monique Haber

While waiting for the men to return from synagogue, my grandmother and all the women in our family busied themselves in the kitchen, beautifully arranging plates of food. We grandchildren stealthily poached samples from those plates, grabbing the bite-sized Syrian pastries that comprise the first course — mazza — for Sabbath and holiday meals.

“Come on, Grandma,” we begged, “at least give us the rejects.”

She scoured the baking pans and plates heavy with freshly fried foods for specimens that didn’t meet her exacting standards: mazza that were either too big or small, or had discolored and cracked during the cooking process. She pressed them into our hands in an effort to shoo us from the kitchen, but that did little to stop us from running back in to sneak another.

No one’s really sure where the word mazza comes from. Some say it’s the Italian mezze, meaning “half,” as the finger foods are only a half-dish. Other suggest it’s from the Arabic d’mazza, meaning to enjoy in small bites, and still others suggest it comes from the Spanish mesa, meaning “table,” because the many small plates cover the table.

Wherever the word originates, the salads and pastries of the mazza course are often the signature dishes of Middle Eastern cooking and are a staple on any Syrian family’s Sabbath table. Even a modest meal will begin with a few salads, hummus or babaghanouj, and the dish without which no self-respecting Syrian mazza is complete: kibbe.

Kibbe, meaning dome or bowl in Arabic, can come in several varieties of meat formed into the shape of a ball. But everyone’s favorite is nicknamed kibbe torpedoes and is made from a bulgur wheat shell in the shape of torpedo, stuffed with spiced chop meat, deep fried, and served with wedges of lemon and tahina.

Because there are so many dishes in the mazza course, and because all are labor-intensive, few Syrian women make an entire mazza at once. Rather, we fill our freezers, picking one day to roll hundreds of stuffed grape leaves that will later be stewed in apricot sauce, another to make trays of tangy tamarind meat pizzas and yet another to assemble phyllo dough triangles stuffed with spinach and roasted walnuts and topped with sesame seeds. All these foods then wait in frozen containers until the hostess pulls out an assortment to serve on her Shabbat table. Kibbe torpedoes, with their crispy golden crust and cinnamon and allspice flavored meat, are the king of the mazza table, the most delicious dish, but also the most difficult to make, even for the seasoned cook.

I’ve been helping in the kitchen since I was old enough to stand. I’ve had years to learn the secrets of food preparation as I worked alongside my mother and grandmother, creating meals for our large, close-knit family that constantly gathers to eat. But I have never made kibbe by myself. Filling my freezer requires a drive to my grandmother’s house, where my mother usually meets us, and three generations of women sit around the table, catching up on life as our busy hands mold dough into tubes, stuff them and seal them, creating the signature dish of our culture.

My grandmother often has the dough ready by the time I arrive, and now that I’m an adult, it’s my turn to scold her. “Don’t start without me,” I always say. “If you make half of it before I get there, I’ll never learn to do it myself.”

Coarsely chop onion and sauté in olive oil until translucent. Add meat constantly stirring until brown. Mash with a fork so that the meat is not clumpy. Add spices and cook a few minutes longer. Let cool before stuffing.

Rinse the bulgur wheat 2-3 times by placing it in a fine mesh strainer. Transfer to a bowl and soak the bulgur for 15 minutes. Drain excess water.

Add flour, matzo meal and two tablespoon of oil. Knead dough together by hand. Then add remaining oil and spice. Mix by hand again to achieve even consistency. If dough feels dry, add a little bit of water.

To shape the kibbe, separate the dough into one inch balls (about the size of a golf ball). Cup each ball into the palm of one hand. Using your index finger from the opposite hand, make an indentation in the ball, and slowly press the dough over the finger until you’ve created a three inch tube that is only open on one side. Keep a bowl of water nearby so you can keep wetting your palm and finger, otherwise they will become too sticky to form the shape. Be careful that the dough is evenly distributed throughout the shell or it will crack when cooked.

Stuff each shell with a spoon of the browned, seasoned meat. Do not overstuff. Pinch the dough closed with your thumb and forefinger creating a point at the end. If you notice any cracks in the dough, dip your finger in the bowl of water, and gently rub it back and forth over the crack, smoothing the dough into place.

Place torpedoes on a baking sheet covered with parchment paper. You can freeze them at this point. They will keep for at least three months.

To cook: you can use a regular frying pan, but I prefer a deep fryer like the Fry Daddy. Fill it with vegetable oil and let it get hot. Fry 4-5 kibbe at a time, until the crust turns golden brown. Use a slotted spoon to remove. Place onto a plate lined with paper towels to absorb excess oil.

Serve garnished with lemon wedges and parsley. Squeeze some lemon onto the kibbe, or dip it in tahina or hummus. Enjoy!