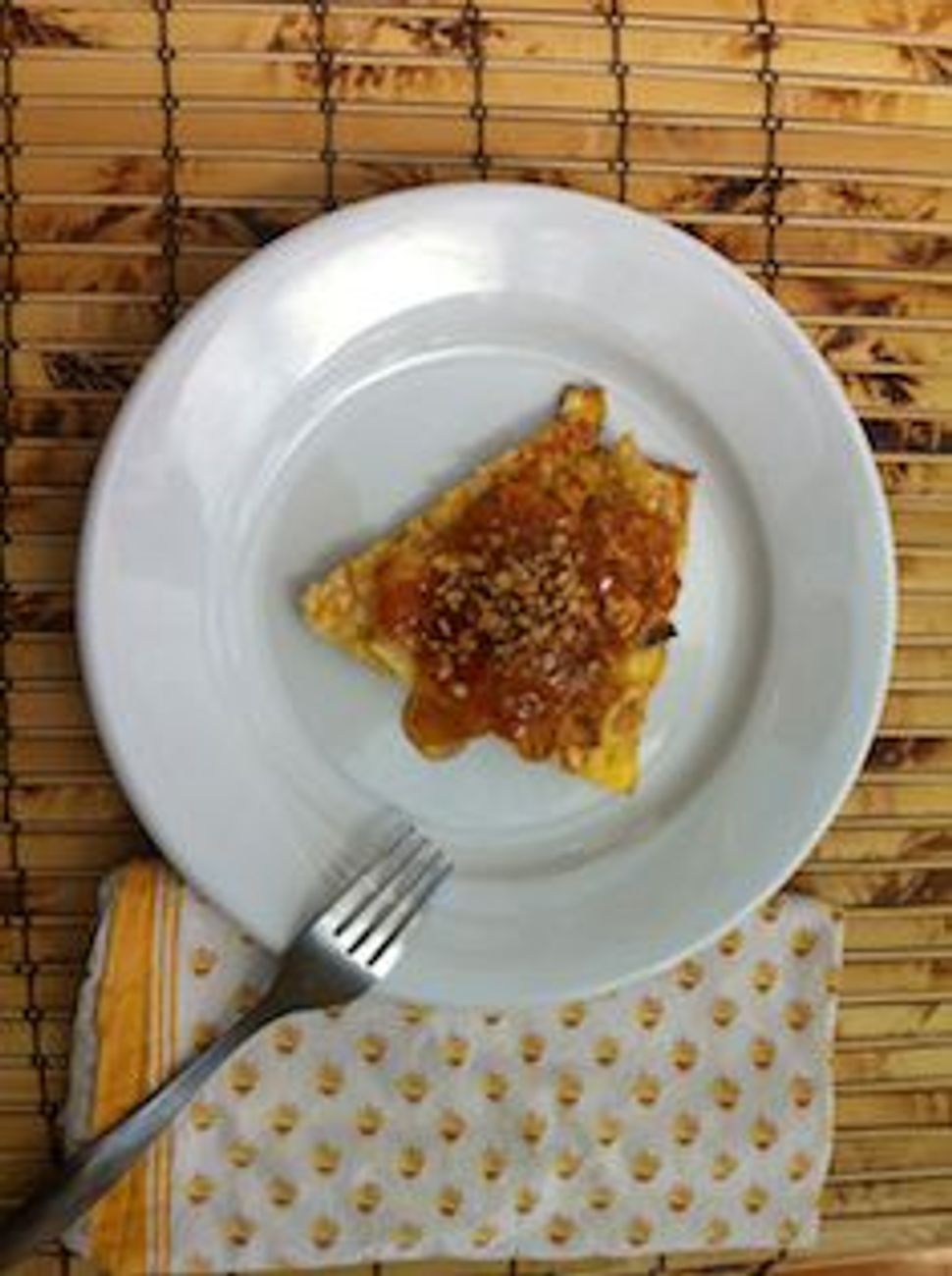 Image by Photo By Rachel Harkham 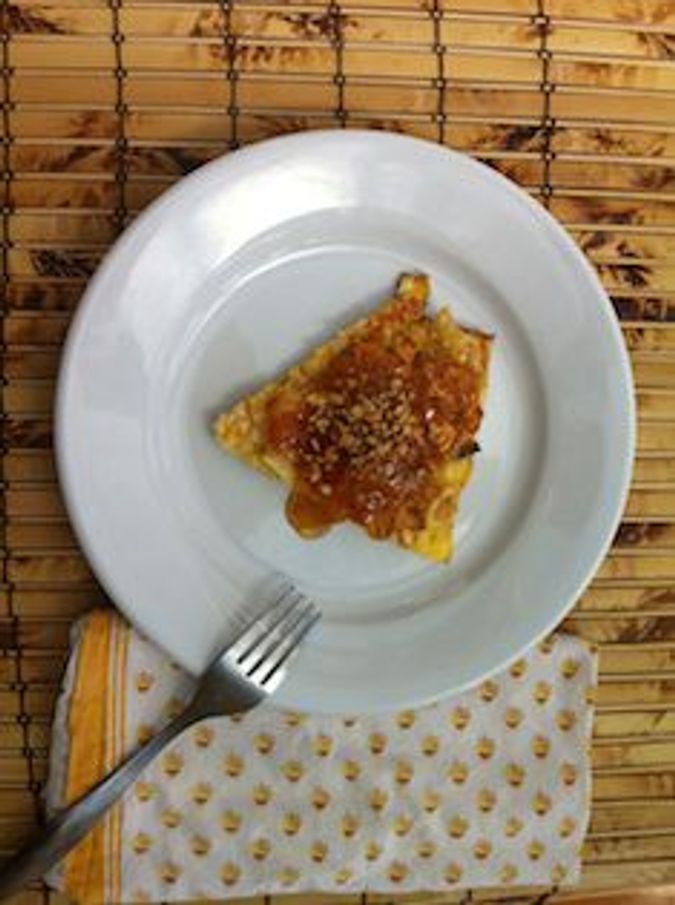 Image by Photo By Rachel Harkham

When approached the right way, Passover cooking can have a Top Chef quality to it: Make a delicious and flavorful meal using eggs, matzah, and marmalade in fifteen minutes or less. Go! As in quickfire challenges, a little creativity and lots of flavor go a long way in the kitchen during Passover.

After reading through Jewish Holiday Cooking by Jayne Cohen, I knew that matzo brei had to be reconsidered. Cohen offers a whole chapter on matzo brei that begins with a comprehensive guide to attaining your preferred matzo brei texture, and there are four to choose from: scrambled egg style, frittata-like, in the manner of French Toast, or Pancake method). She then moves onto examples of unique and delicious recipes like Savory Artichoke Matzo Brei or Cinnamon Matzo Brei with Toasted Pecans and Warm Vanilla-Maple Syrup. It is matzah brei for a new generation of Jewish cooks: matzo brei influenced by delicious food you would eat year-round. Reappropriating a frittata or a French toast would be a welcome change from the usual Passover week dinners of matzo lasagna or matzo pizza, and the making of it would be quick and easy. Matzo brei started sounding better and better.

Using Jayne Cohen’s riffs on this classic Jewish soul food, as the inspiration for a Matzo Brei Flavor Project, it would only be fair to abide by some cooking challenge guidelines: one, the dish had to be completed in 15 minutes or less, two, could only utilize ingredients available for Passover, and three, had to have year-round appeal.

The Sour Cream & Onion Matzo Brei (scrambled egg style) I prepared was tasty and filling. The spring onions that were sautéed and sprinkled across the top added a nice crispy texture. But my favorite matzo brei flavor experiment was the concoction based on the flavors of my standby party appetizer recipe: baked Brie smothered in a marmalade sauce and studded with chopped pecans. It found new form in a frittata style brei with golden slabs of Brie melting lusciously on top and then drippings of bright and sunny marmalade sauce across the Brie brei, ending crunchily with a scattering of chopped walnuts. It was yummy, different, and pretty easy to make. The flipping of the matzo frittata in a single piece was my biggest concern, but waiting until the edges are a deep and crispy golden brown is a good way to tell when it is ready to flip. The dish was made in under 15 minutes, and the judges all agreed that it’s a knives-down-and-hand’s-up delicious year-round Passover dish.

1) Break up matzo into approx. 2”- 3 “ pieces. Place in colander and rinse with water, until matzo pieces are damp but not wet. In a medium sized bowl beat eggs together with milk and salt or sugar.

2) Mix the matzo pieces into the eggs and combine well, so that every piece of matzo is coated in the egg batter.

3) Meanwhile melt butter in a large skillet over medium-high heat until it sizzles. Add the matzo batter all at once, spreading it out evenly over skillets.

4) As the brei frittata begins to cook and set, place the brie slices in any configuration you like across it’s surface.

5) Finger crossing time: When the brei pulls away from the sides and is a deep golden brown around the edges use your spatula to help guide the frittata onto a platter. Place skillet face-down over platter, and with one hand holding the skillet handle and the other hand beneath the platter, without hesitation flip them over so that the brei lands in the skillet brie side down. Cook for another 2 or 3 minutes.

6) While Brie is melting, heat marmalade in small saucepan so that it becomes syrupy, add 1 tbsp. brown sugar if you like it on the sweeter side.

7) Cut brei into desired sized wedges. Flip the wedge so that the brie is showing. Pour a tablespoon or two of the marmalade across the top, and then scatter with teaspoon of chopped walnuts. Serve warm. Makes 3 or 4 servings.

1) In a large skillet over medium flame heat butter until it melts. Add chopped spring onions and sauté until medium golden brown and crispy around edges. Remove from skillet and set aside.

2) Break up the matzo rinse them in a colander with cold water.

3) In a large bowl beat eggs until light and foamy. Fold in sour cream and then mix in dry onion soup mix until incorporated. Stir moistened matzo into egg mixture and combine well.

4) Add remaining 2 tablespoons of butter to the skillet and heat until it sizzles. Pour batter into the skillet. Fry until golden brown on brown and turn over and fry on the other side until done to taste.

Rachel Harkham is a chocolatier and food writer who lives with her three children and husband in Rockland County, NY. Her cookbook “Get Cooking: A Jewish American Family Cookbook” written with Doni Zasloff Thomas will be available in Fall 2012.