Gefilteria’s Carrot Maror Kicks It Up a Notch 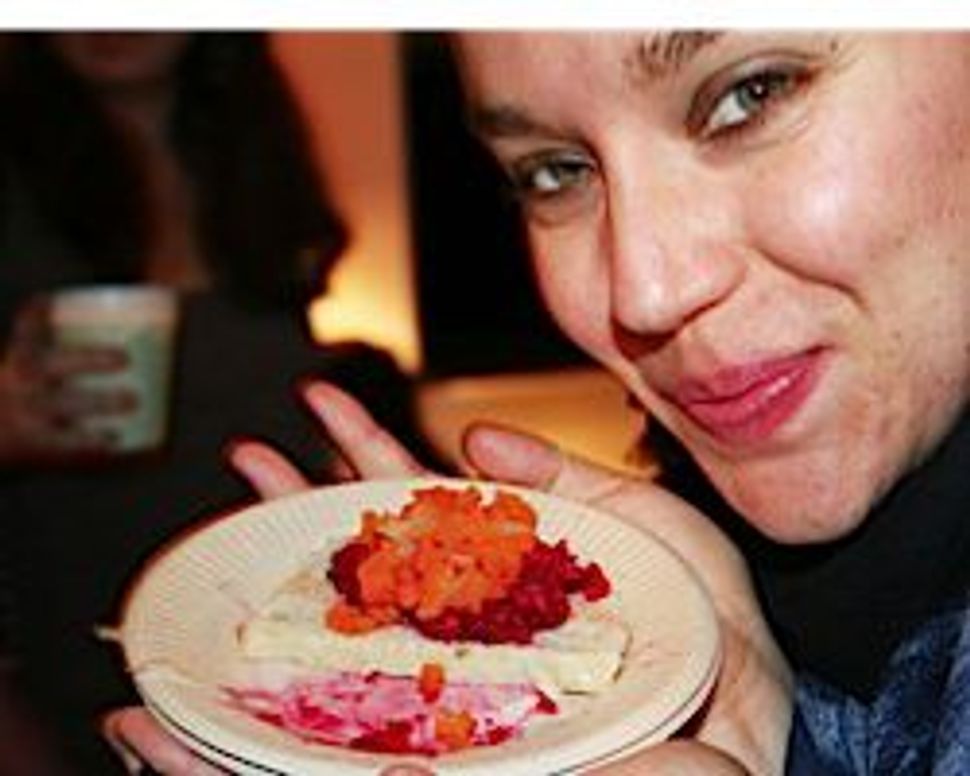 Never in the history of gefilte fish — perhaps the most haimish of Jewish dishes — has it drawn so much attention from the discerning food world. In Adeena Sussman’s recent article, “From Haimish to Haute” Zach Kutsher, owner of Kutsher’s Tribeca commented: “It’s our most controversial menu item.” Indeed their upscale preparation sparked intense debate among New York’s top food critics who placed more weight and emphasis on it than any other dish of the Jewish food revolution we seem to be in the midst of.

But Kutsher’s isn’t the only place responding to the call for a makeover of this oft-disliked — or perhaps misunderstood — dish. “More than almost any other Jewish food, gefilte has a bad reputation,” said Jeffrey Yoskowitz, one of three young New Yorkers who recently launched The Gefilteria, what they call a “pushcart start-up,” that sells sustainably sourced artisanal Jewish foods.

“I was tired of this food that I love being so misunderstood,” added Yoskowitz. Along with Liz Alpern and Jacqueline Lilinshtein, Gefilteria has set out to set the record straight on Jewish foods — starting with gefilte fish. Their rendition is elegant and delicately flavored. Made with sustainably sourced fish, it comes in a loaf with a layer of ground salmon sandwiched between two layers of ground pike and whitefish mix that looks more like pate than gefilte fish.

The dish is topped with a dollop of sweet beet horseradish as well as a fiery carrot maror. The latter is an “homage to the carrot that is placed on a piece of gefilte,” said Yoskowitz. “We want to make the experience of eating gefilte a bit brighter, less drab.” The recipe is fairly simple, but the idea is a revelation — offering a spicy contrast to delicate gefilte fish, it kicks the dish up a notch.

Check out where to buy Gefilteria gefilte fish as well as kvass, sauerkraut and other treats here

1) Place carrots in a sauce pan and fill with enough water to cover them. Boil carrots until cooked but not mushy (times vary depending on thickness of carrots), drain and set aside.

2) Peel horseradish root and place in food processor with cooked carrots, lemon juice and salt. Run food processor until ingredients are finely chopped . Be careful not to put your face too close to the processor while taking the top off. It will be intense!

3) In a small saucepan, combine ½ cup water with the sugar and lemon juice. Heat over a medium flame, stirring ingredients until sugar is dissolved and liquid has boiled lightly for about 4 minutes.

4) Add lemon zest to the food processor and pour vinegar/sugar liquid into the processor gradually, making sure to stir ingredients inside between pulses. You do not want the mixture to be soupy, so add liquid only until the carrot-horseradish mix is fully coated, shiny and moist.

5) Place horseradish in a sealed container and let sit in the refrigerator at least 24 hours before eating.
Warning — this will be spicy!

Gefilteria’s Carrot Maror Kicks It Up a Notch