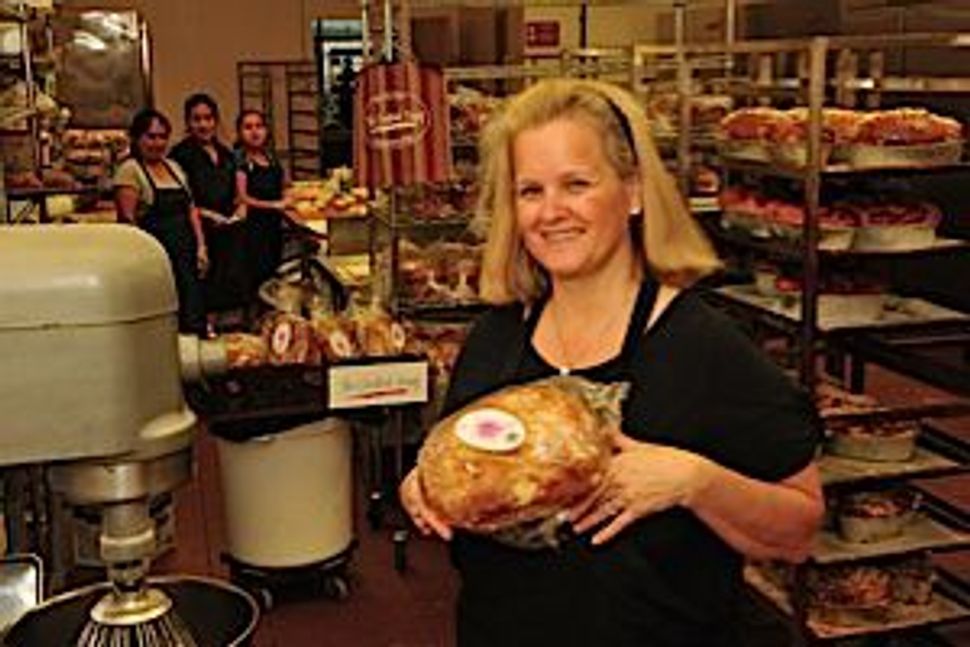 She delivers freshly-baked challahs to customers’ doorsteps (or their doormen), but she doesn’t use wings to get there… she drives a Honda Pilot.

The Challah Fairy, a.k.a. Chanalee Fischer Schlisser, sees her business almost as a calling, hoping her tasty challahs will encourage more Jews to enjoy Shabbat.

“People have a much better experience of Shabbos if they have a special challah and not some gross supermarket challah,” Schlisser said.

Schlisser’s challahs have garnered a following in the New York area, specifically specialty flavors like cinnamon and chocolate. Her “best-ever” chocolate babka is also popular.

Schlisser is the kind of woman who talks a mile a minute and is always on the go. She paused several times during our phone interview to take orders, pour her cafe customers coffee and chat with employees about the degree to which her dough was rising.

This ability to multi-task explains how she started baking two decades ago, with two young children in the house. “I stopped working and felt I had a lot of time on my hands,” she said.

Though she’s never had professional training, Schlisser’s always loved to bake. Well before she started her business, she would fill her freezer to the brim with baked goods and invite friends over to indulge.

While she always made challah for her own family, Schlisser began making extras for friends, and delivering them to their doors before Shabbat. Hence the nickname “Challah Fairy.”

Over a dozen years (and two more kids) later, The Challah Fairy has turned into a veritable money-making business. Schlisser’s challahs are sold in 15 New York-area stores (both boutique shops and large supermarkets), and she recently signed a deal with Whole Foods, which will soon begin carrying her challahs.

She’s even branched out to non-kosher clientele, selling challah to an Upper West Side Italian restaurant called Celeste, which uses the bread as a base for their French toast.

Last November, Schlisser opened a small dairy cafe attached to her bakery in New City, New York — about an hour from the city — where she makes her own “famous Challah Fairy French toast,” as she calls it. The strictly-kosher Challah Fairy Bakery and Cafe serves salads, sandwiches and wraps.

She spends every day (except Shabbat) at the bakery, makes the dough herself, and still personally delivers challahs to about 50 customers in Manhattan, Northern New Jersey and Westchester on Thursday nights. (“I’m just not ready to give up that part of the business, I can’t afford to have someone do it wrong,” she said). She recently had to retire her Land Cruiser, after putting nearly 300,000 miles on it.

On Mondays, Schlisser prepares leftover challahs to be frozen and delivered to U.S. troops in Iraq and Afghanistan through Kosher Troops.

In her spare time (ha!) she teaches challah-making classes at Jewish community centers and synagogues.

And she doesn’t show any signs of slowing down.

Eventually she hopes to open a location in Florida. But for now, she’s busy baking, delivering, and dreaming up new flavors. Over Mother’s Day weekend she created two specialty challahs — apple cranberry and onion garlic. “The onion garlic was outrageous. I could eat the whole thing. I’m not obese yet, but I’m telling you, it’s not easy,” she said with a laugh.

We’ve included The Challah Fairy’s own cheese strudel recipe below, which may just replace your traditional cheesecake this Shavuot (if you’re willing to put in a bit more work).

2) In a separate small bowl, add yeast to warm milk (with a teaspoon sugar). When it bubbles, add to mixing bowl and mix for at least five minutes. If too wet, add more flour.

3) Move to warm area and let rise for one hour.

4) Divide into three sections. Roll out each piece of dough as you would a roll cake. Fill with a third of the filling. Roll up jelly-roll style.

5) Place in a single loaf pan sprayed with Pam, and brush with additional egg and sprinkle generously with crumb topping.

This freezes very well, if it makes it to the freezer.