Chatting in the Kitchen with Yotam Ottolenghi 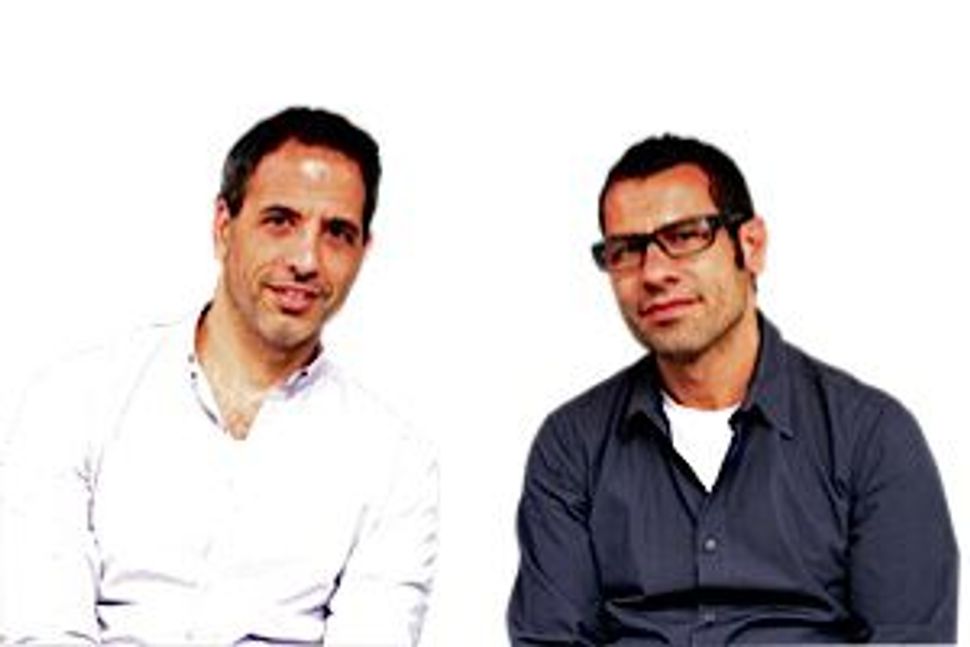 In the Kitchen: Isreali chef Yotam Ottolenghi and Palestinian chef Sami Tamimi have worked together in London for over a decade. Image by KEIKO OIKAWA

So bold are the flavors in “Ottolenghi: The Cookbook” that author Yotam Ottolenghi said he and his partner considered beginning it with a warning: if you don’t like lemon or garlic, skip to the last page.

Chef and restaurateur Ottolenghi and his co-author and co-chef Sami Tamimi have several eateries in London, including Nopi, their high-end location.

“There’s no understatement in our food. It clearly states what it does. In that respect, it’s deeply rooted in the culture and temperament of the Middle East and the Mediterranean,” said Ottolenghi about the 140 recipes in the book.

“Ottolenghi,” published this month in North America, predates the London-based team’s runaway bestseller “Jerusalem,” which was named Cookbook of the Year by the International Association of Culinary Professionals in April.

The 44-year-old spoke to Reuters from London about cooking food that shouts, the joys of eating out in present-day London, and the magical properties of the pomegranate.

How does your partnership work?

We’re both from Jerusalem. One is Jewish, the other Arab. I come from a European background, while Sami had typical Arab fare but our sensitivities are similar in terms of food. We cooperate very well together in (a) blend of Mediterranean and Middle Eastern.

What are the features of this blend?

Basically we’re quite out there in terms of flavors and colors. We use a lot of spices and herbs. We also tend to cook quite rustically, more like in the Middle East – simple … It’s definitely not Scandinavian food. There are no subtle flavors … It shouts quite loudly.

Did you always want to be a chef?

I was drawn to it after a career in academia, working in a university and at newspapers. Food was always important in my family, but I didn’t think of it as a vocation until a later point in life.

What is your training?

I took a few courses at the Cordon Bleu (in London) but acquired most of my practical knowledge working in various establishments here in London.

Has London finally shed its reputation for bad food?

From where I’m standing, that’s just a distant memory, some kind of folk story people tell but nobody believes anymore. There are tons of wonderful places to eat in London. It’s quite amazing to think that it was such a desert only 15 or 20 years ago.

What’s always in the pantry?

Spices like cardamom, cumin, turmeric and coriander seeds; herbs like tarragon, cilantro and chives. Condiments or infusions like rosewater or orange blossoms. And pomegranate is very popular in the Middle East. We had it growing in our garden. There’s tons to do with it, it’s healthy and very beautiful to look at. In many ways it’s a magical ingredient.

Read more for a recipe from the book!

1) Preheat the oven to 300°F / 150°C. Arrange the tomato halves, skin side down, on a baking sheet and sprinkle with the sugar, 2 tablespoons of the olive oil, the balsamic vinegar, and some salt and pepper. Place in the oven and bake for 2 hours, until the tomatoes have lost most of their moisture.

2) Meanwhile, put the onions in a large pan with 4 tablespoons of olive oil and sauté over high heat for 10 to 12 minutes, stirring occasionally, until they are a dark golden color.

3) Throw the mograbiah into a large pan of boiling salted water (such as for cooking pasta). Simmer for 15 minutes until it is soft but still retains a bite; some varieties might take less time, so check the instructions on the packet. Drain well and rinse under cold water.

4) In a separate pot, bring the stock to a boil with the saffron and a little salt. Place the couscous in a large bowl and add 3 tablespoons of the olive oil and the boiling stock. Cover with plastic wrap and leave for 10 minutes.

5) Once ready, mix the couscous with a fork or a whisk to get rid of any lumps and to fluff it up. Add the cooked mograbiah, the tomatoes and their juices, the onions and their oil, the tarragon, and half the nigella seeds. Taste and adjust the seasoning and oil. It is likely that it will need a fair amount of salt. Allow the dish to come to room temperature. To serve, arrange it gently on a serving plate, place the labneh on top (in balls or spoonfuls), drizzle with the remaining oil, and finish with the rest of the nigella seeds.

Chatting in the Kitchen with Yotam Ottolenghi