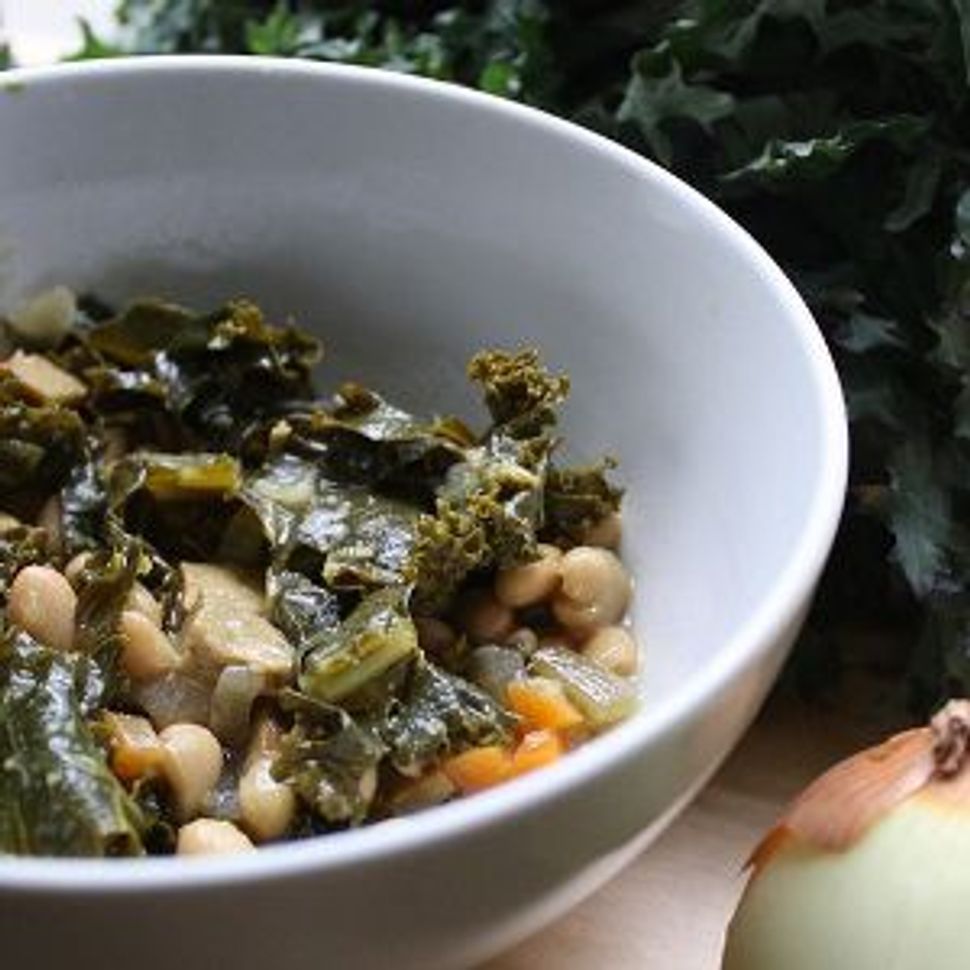 The start of November is here which means that Thanksgiving is just around the corner. In order to kickstart your menu planning, we’re thrilled to share this recipe from cookbook author and Forward contributor Leah Koenig.

Here’s what Leah has to say about the recipe:

This is one of my absolute favorite soups. As the weather turns cool, sweet potatoes and kale come into peak season, which makes them ideal candidates for fall cooking. The real secret to this soup, though, is the roasted garlic. It adds an unexpected burst of flavor that transforms the dish into something special enough for the Thanksgiving table. Serve it with crusty bread or, if you are eating it for the holiday, your favorite homemade biscuits.

1) Preheat oven to 400 degrees. Slice top off the garlic head, exposing the tops of the cloves. Drizzle with 1 tablespoon oil, wrap tightly with aluminum foil and bake until cloves are soft, 30-40 minutes. Remove from the oven and let cool. Squeeze the cloves out of their shells into a small bowl and set aside.

3) Add roasted garlic and broth and bring to a simmer. Lower heat to medium-low and cook until sweet potatoes are tender, about 12 minutes. Add kale and white beans and cook just until kale begins to wilt, 4-5 minutes. If desired, add a little more broth. Season with salt and pepper and serve immediately.

Reprinted with permission from The Hadassah Everyday Cookbook: Daily Meals for the Contemporary Jewish Kitchen.

Leah is going to be one of the featured presenters at this year’s Hazon Food Conference – December 29, 2013 – January 1, 2014 at the Isabella Freedman Jewish Retreat Center in the CT Berkshires. At the conference, you’ll be able to schmooze and learn recipes, cooking tips, and DIY techniques from Leah and other notable chefs and cookbook authors, including Joan Nathan, Gil Marks, and Itta Werdiger-Roth.