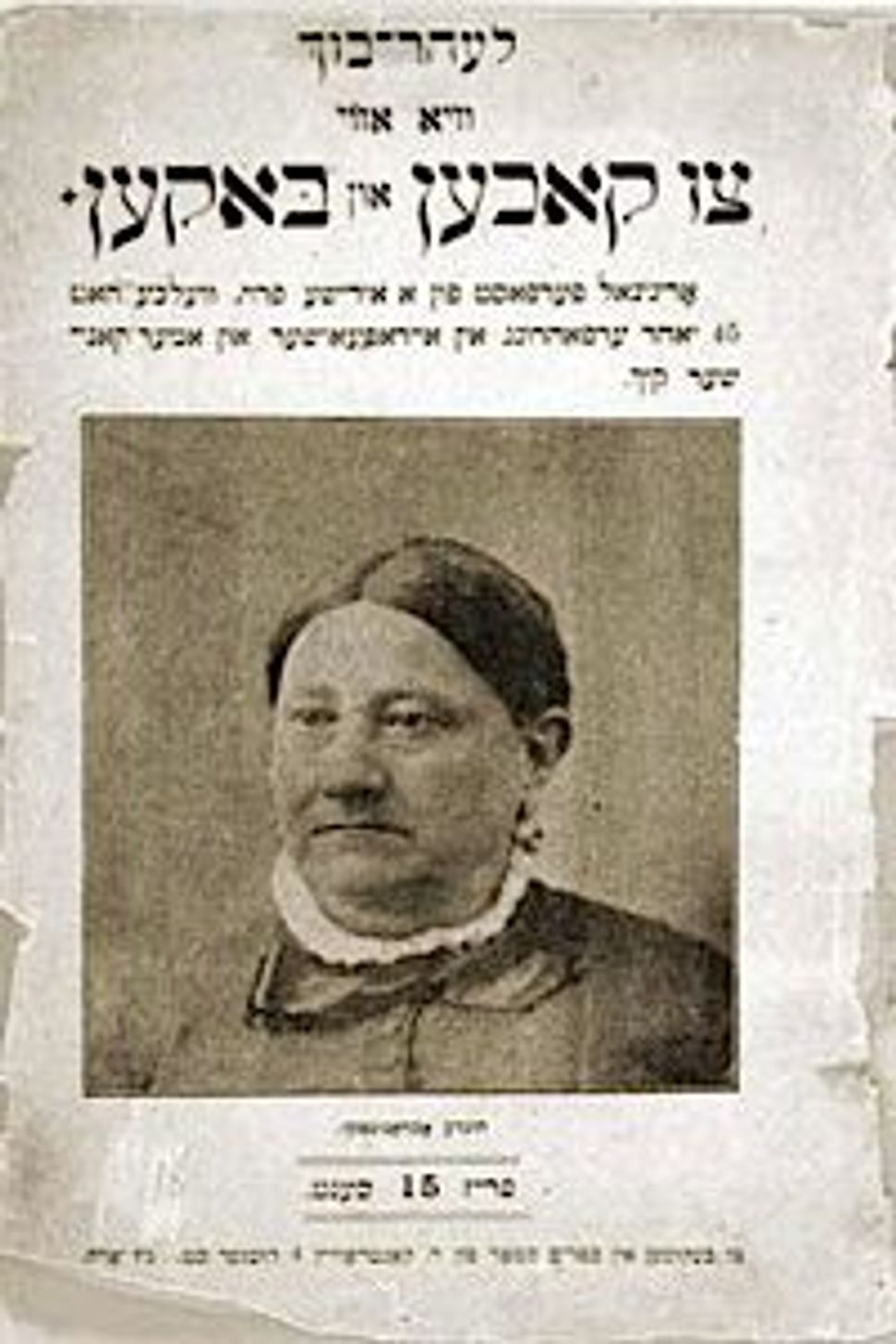 Several years ago, while on a walk with his dog, John Lankenau came across a tombstone leaning against a fire hydrant on Manhattan’s East Fourth Street. Most of the writing on the tombstone was in Hebrew, but not the name: Hinda Amchanitzky.

Lankenau rescued the tombstone from the sidewalk and went looking for answers: Who was this woman? Where was she actually buried? With the help of a genealogist, New York Times reporter, and New York City’s commissioner of records, the facts emerged. Remarkably, Amchanitzky was the author of the first Yiddish cookbook published in America. A copy of her book is archived in the Library of Congress.

The tombstone was reunited with its proper grave in Staten Island in 2011, over 100 years after Amchanitzky died. Though the peculiar circumstances surrounding her misplaced gravestone made modern headlines, Amchanitzky was certainly no wallflower in her lifetime.

“She was something of a mover and a shaker,” said Jane Ziegelman, a food historian and author of “97 Orchard: An Edible History of Five Immigrant Families in One New York Tenement.”

Ziegelman’s sense that Amchanitzky was likely a “local East Side celebrity” stems from the fact that Jewish women living on the Lower East Side at the turn of the century had essentially one place to look for new recipes: Amchanitzky’s “Manual of How To Cook and Bake,” which she self-published in 1901.

“In a sense, they adopted Hinda as a kind of culinary profit: someone who spoke their language, who shared their values, but who could also lead them into the new food territory which they discovered in New York, ” Ziegelman said as she presented her research on Amchanitzky at the Lower East Side Tenement Museum on Wednesday evening, where she was joined by Annie Polland, head of education and programs at the museum, and Sam Roberts, the Times journalist who originally broke the story of Amchanitzky’s tombstone.

Born in Russia, Amchanitzky traveled throughout Europe as a young woman and made her living as a cook. After emigrating to New York in 1895, she opened several restaurants on the Lower East Side. Amchanitzky mentioned this detail with great pride in her cookbook’s forward, writing that the best guarantee that her cookbook would prove “highly useful to every woman and bring complete satisfaction to many homes” was the fact that she had run restaurants in New York for many years “where the finest people with their capricious stomachs came for sustenance and everyone was very happy with my food.”

“Hinda was clearly experimenting with a new form,” said Ziegelman.

Though many of the cookbook’s 148 recipes are Jewish classics — gefilte fish, chopped herring, chicken soup, stuffed spleen — less-than-traditional dishes that Amchanitzky came across in her travels or as a New York immigrant also make the cut, including English pot roast, hamburger steak, oatmeal and eight kinds of pie.

Among the roster of recipes is the following for Cranberry Strudel:

Editor’s Note: Following this recipe from over a century ago takes a bit of creative liberty. For example, instead of a “glass of fat” i.e. shmaltz, Ziegelman suggests substituting a cup of unsalted butter and adding a pinch of salt. To “rub” ingredients together translates to blending them together well. Ziegelman recommends baking for about 35-40 minutes. The end result is not so much a strudel as it is akin to a fruit buckle or bar — a very good one.

Take a quart of good cranberries, a half pound of sugar and a bit of water. Cook until thick and put aside to cool. Take a glass of fat, a glass of sugar, 2 eggs and rub them together. Pour a glass of water into it and mix it well. Take two glasses of flour, two and a half teaspoons baking powder, mix them together and rub it together well. Take a sheet and grease it well. Pour in half the batter and spread it evenly over the entire sheet with a spoon. Spread the cranberries evenly over the dough and pour the remaining dough over them covering them completely [so they cannot be seen]. Sprinkle sugar on top and bake thoroughly. When done let cool and cut into pieces. This is a very good strudel.