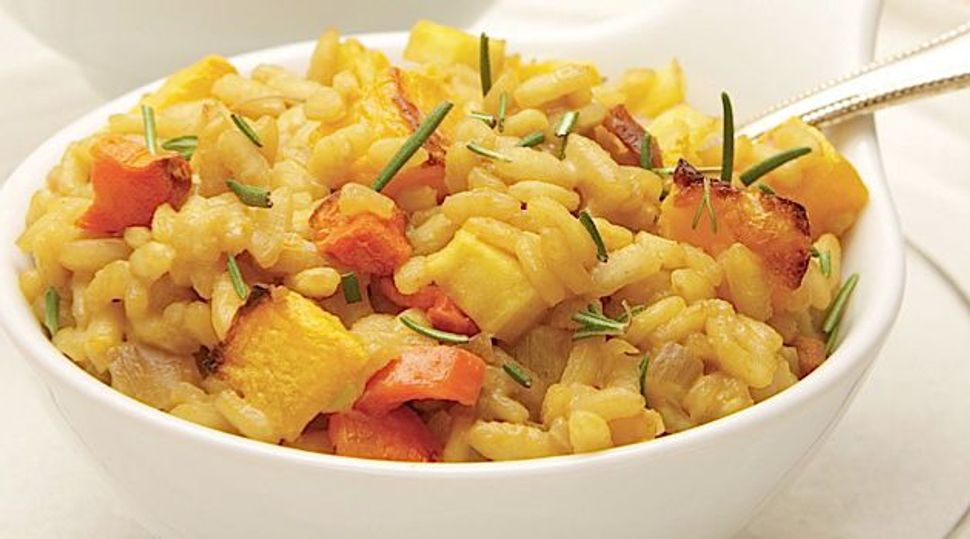 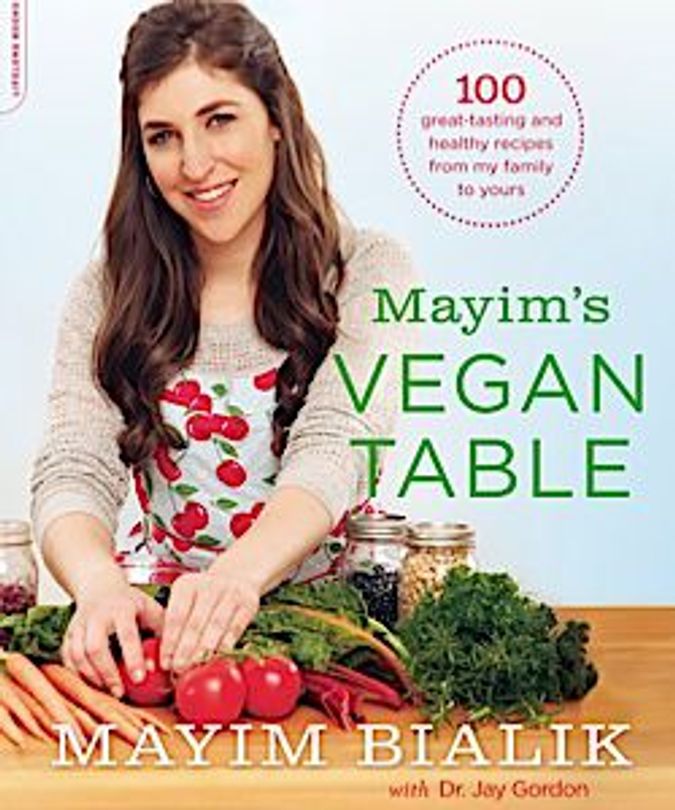 It probably was only a matter of time before Mayim Bialik put out a cookbook. The actress – who began her career as a child actor on “Blossom” and now appears regularly on “The Big Bang Theory” is also known for a few other things: her PhD in neuroscience; her advocacy of attachment parenting; her blogging for the Jewish parenting website kveller.com; her balancing act of working in Hollywood as an Orthodox Jew; and her diet.

One might assume she is kosher, which she is, but Bialik is also a vegan. Her journey to veganism, she says in “Mayim’s Vegan Table: More than 100 Great-Tasting and Healthy Recipes From My Family to Yours” co-authored by Dr. Jay Gordon, began as a vegetarian college student, but she began cutting back on dairy when she realized her son was having issues with it from breastfeeding. What began out of practicality later morphed into embracing veganism for idealistic reasons, too.

This is not a cookbook with a capital C. It’s not a hardback, and unlike most Cookbooks these days, which have a photo of almost every dish, this one has a small photo section in the middle (with photos taken by Mayim’s friend Denise Herrick Borchert).

Her co-author, Dr. Jay Gordon, is a pediatrician who has been vegan for over 40 years. Bialik and Gordon spend the first third of the book explaining a vegan diet, why one should be wary of the meat and dairy industries, nutritional myths as they see them, especially when it comes to feeding your children — such as that children need milk — how to stock a vegan pantry, kind of like Veganism 101. They also say that they know most people won’t be as extreme as they are, but that any move toward a plant-based diet is the right step.

While I like vegan food when done well, at first look, I wasn’t that enthused by this book. I’ve been slowly cooking my way through Isa Chandra Moskowitz’s “Isa Does It” and have been impressed with the results. This book, with its breakfast burritos and mac and cheese with vegan cheese looked less than inspired.

I quickly realized, though, that the sophisticated vegan fare in “Isa Does It” that appeals to me will not pass muster with the palates of the under 10 crowd. Since Mayim’s goal in putting this book out is helping people feed their families – her kids have been raised entirely vegan — I realized some kids needed to be invited to this party.

Enter the Heaslip family, Meldan, Serena and their two daughters, Jemima, 9, and Clara, 6. The girls were warned beforehand that their feedback may be recorded, and Clara, perhaps already aware of the NSA and other goings on, chose not to say a word throughout the meal.

I made three dishes from the book. The first, “Rainbow Cabbage Salad with Tahini-Lemon Dressing” was as vibrant-looking as it sounds, especially since I happened to have both red and green cabbage on hand from my CSA (the recipe calls for red, but I used both). Rather than leave the cabbage raw, you pour boiling water over it in a colander to soften it a bit, and then add red pepper strips, chopped celery, shaved carrots and toasted sunflower seeds. The dressing is pretty standard: tahini with a bit of lemon juice and garlic.

Jemima loved the salad and loved the dressing even more. Meldan and Serena both liked the texture of the cabbage in that it was different from other slaws, and Meldan said he appreciated that not the usual stand-by lettuce salad.

While we were all eating our salads, Clara ate her way through the next dish without a word, which is probably the heartiest endorsement one can get. It was “Dilled Chick-Pea Burger with Spicy Yogurt Sauce.” The burgers are mainly made of mashed chick peas, chopped dill, shallots, bread crumbs (I used gluten-free ones for this family’s sake), lemon juice, and then a binder is made from putting half the chick peas in the food processor with tahini. They are fried until crispy, and then served with a vegan yogurt, spiked with curry powder, garlic and cayenne.

Interestingly, Mayim’s head note on this recipe says, “No one will ever know these burgers are made of chick peas, unless you tell them.” I couldn’t disagree more, especially since half of the chick peas are mashed and therefore are left fully recognizable. No one will mistake them for meat, either, but that’s not a bad thing.

I recommend making the batter, shaping the patties, and then putting them in the fridge for at least half an hour, possibly more, before frying them. Veggie burgers often fall apart in the pan, and this can help prevent that somewhat.

Not having much experience with vegan yogurt, I wasn’t sure which one to buy. I went with one made from soy, thinking a coconut-milk one would be too strange in this application, but even the plain soy one I bought lacked the tartness of regular yogurt. I took some liberties with the recipe, adding salt, olive oil and lemon juice, which improved it immensely.

Last, I made a “Winter Vegetable Risotto” with rosemary-roasted butternut squash, parsnips and carrots. Given that risotto relies heavily on butter and parmesan for the creaminess factor, I was quite certain this version with tahini, almond milk, nutritional yeast, mirin and lemon juice would disappoint.

The girls as well as their parents both ate their portions, with Jemima proclaiming it “delicious.” When asked which dishes she wanted her mom to make at home, she said the salad and the burgers, which, in my mind, is a hearty endorsement of all three.

I thought the risotto was perfectly passable, but of course, not being vegan, I couldn’t help but miss the butter and parmesan.

After dinner, Jemima sat in her dad’s lap with the book, pointing out dishes that sounded good to her, like Brussels sprout chips and a peanut butter smoothie.

In short, while this book isn’t going to have foodies rapturously tweeting about its mouth-watering recipes, it could just get your kids to eat more veggies, which, I can imagine, in some circles of exasperated parents, might be just the kind of cookbook one is looking for.