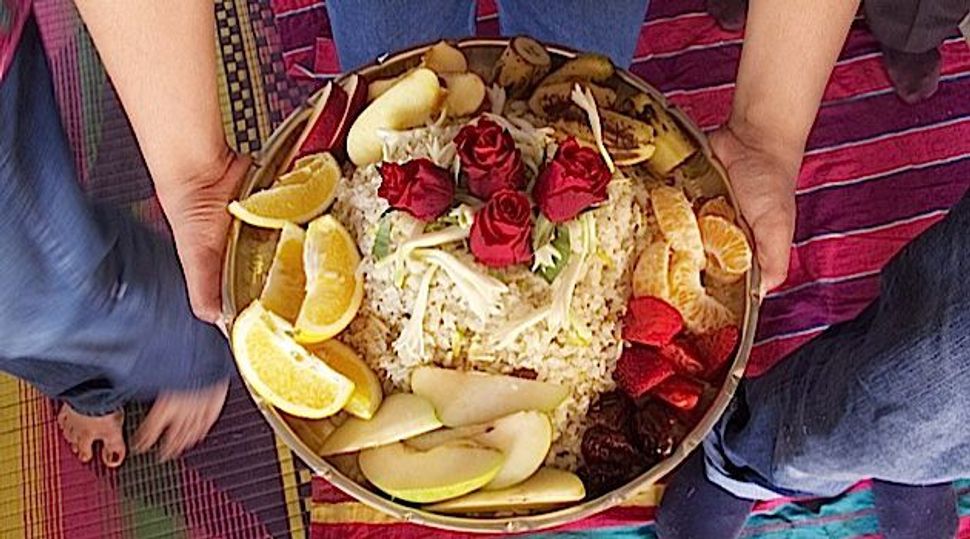 ‘The scent of clove and cardamom immediately brings me back to my grandmother’s kitchen in Mumbai,” Siona Benjamin tells me as she stands in her own sunlit kitchen, in Montclair, N.J., with the makings of coconut chicken curry — cans of coconut milk, fresh ginger and a round, silver tray lined with small bowls of ground spices — spread out before her on the island. “Her food was so colorful, like green peas served in yellow turmeric rice.”

As an artist who explores notions of home and identity in paintings and mixed media pieces, these sensory details matter to Benjamin. “I cook like I paint, with a palate of colors,” she adds. A sense of continuity matters, too. She grew up in Mumbai as a member of the Bene Israel community, the largest of three groups of Indian Jews who have resided in the country for more than 2,000 years.

The community has lived mostly in peace among its Muslim, Hindu, Christian and Zoroastrian neighbors, borrowing recipes and customs from each. Favoring fish, coconut, rice, fresh herbs and plenty of spices, the cuisine of the Bene Israeli community replaces cream with coconut milk for meat dishes, and the traditional clarified butter ghee with oil. The Bene Israel community also “extended the laws of kashrut by deciding that fish and milk could be neither cooked nor eaten together,” Claudia Roden explains in “The Book of Jewish Food.”

While much of the community’s cuisine recalls that of its neighbors’, home cooks developed unique dishes to celebrate Jewish holidays. During Benjamin’s childhood, Shabbat meals were celebrated with traditional chicken curry made with coconut milk and coconut rice at her grandmother’s home. Like many Jews in Mumbai, her mother prepared her own grape juice for making Kiddush on the holidays, by boiling raisins in water for hours, then squeezing the juice from the plumped fruit. And on Rosh Hashanah she made a special sweetened wheat halva.

Unlike the 70,000 members of the community who emigrated from India to Israel during the second half of the 20th century, Benjamin’s parents stayed in Mumbai. “They were happy with their life there,” she said. Benjamin came to the United States in 1986, as a graduate student with a Master of Fine Arts, and eventually settled in New Jersey.

Still, her connection to her birthplace remains strong. Her doorway is flanked by a large brass mezuza, which Benjamin said is typical of those found in India. And since her daughter, Rachel, left to attend college in Manhattan this year, she has transformed her dining room into an extension of her studio — filling the table with ornately detailed, Technicolor canvases that weave together Jewish and Indian images. Recently, that connection brought her to India for four months on a Fulbright scholarship, where she interviewed and documented members of Mumbai’s remaining Jewish community.

One of the most striking pieces from that collection, “Faces: Weaving Indian Jewish Narrative,” is a mixed media work that features a local Indian Jewish cook named Hannah Samuel. “I followed her around for several days while she prepared food for parties and Jewish ceremonies, and she literally stuffed me with food,” Benjamin recalled. 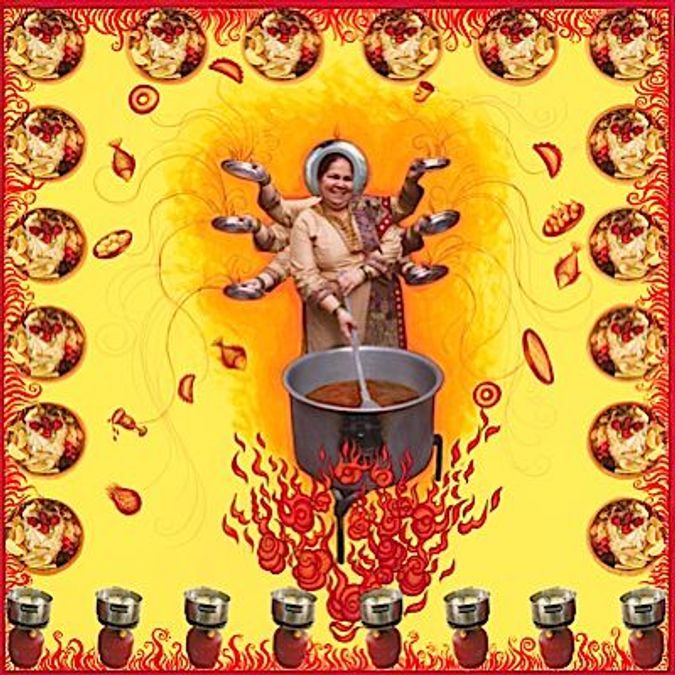 Taste of Home: Benjamin mixed turmeric into her painting of a Jewish Indian cook to add a scent of the Jewish Indian kitchen. Image by Siona Benjamin

The image is primarily bright yellow and red (Benjamin mixed turmeric with the paint to deepen its saffron hue and bring a touch of scent to the piece). In it, Samuel stands in front of a large pot of curry, with multiple arms radiating from behind her, each holding a plate. “She looks like a many-armed goddess, but the arms actually represent the branches of a menorah,” Benjamin said.

Today, there are fewer than 5,000 Indian Jews still living in India. Virtually all of them are Bene Israel. The Jews of Cochin are essentially gone, and the once-thriving Baghdadi community numbers fewer than 100. “Most left for reasons of religious Zionism,” said Rabbi Romiel Daniel, president of the Indian Jewish Congregation of USA. “When the State of Israel was founded in 1948, they just felt it was time.”

North America, meanwhile, is home to 350 Indian Jews. Despite their tiny numbers, they remain relatively united, thanks in large part to the work of the Indian Jewish Congregation. The community hosts annual High Holiday services in Manhattan that draw anywhere from 80 to 90 people. “We get attendees from as far away as Los Angeles,” Daniel said. Food naturally plays an important role in these gatherings, from the wheat halva served on Rosh Hashanah, to a seven-layer fried crepe filled with coconut, raisins and pistachios, called a sweet puri, on which the congregation breaks its Yom Kippur fast.

One sacred ritual that keeps her feeling rooted, Benjamin said, is malida. The Indian Jewish community maintains an especially strong relationship to the prophet Elijah. “He is the equivalent of our patron saint,” Benjamin said. They created a unique ritual of blessing the prophet, which includes preparing and eating a dish called malida made of flattened rice (known as poha) that is softened in boiling water, copiously sweetened with sugar, mixed with shredded coconut and cardamom, and then garnished with five to seven symbolic fruits. “You would hold a malida ceremony on Tu B’Shvat, but also before a wedding, a birth, buying a new home or any auspicious occasion,” Daniel told me.

For Benjamin, making the malida, as she did on a recent trip to India that she took with her daughter and 20 college students, provides an unparalleled link to home. “It brought back a whole room full of memories,” she said. She admits it can be difficult to replicate the Jewish life she knew in Mumbai. So she turns to her art, and to cooking, to maintain the thread and pass it to the next generation. In her painting of Samuel, for example, the canvas is bordered on three sides by plates of malida. “My daughter is very proud of her Jewish Indian heritage,” Benjamin said. “She gets it.”

Malida Fit for a Celebration