Bake Your Own Boozy Cocktail Hamantaschen 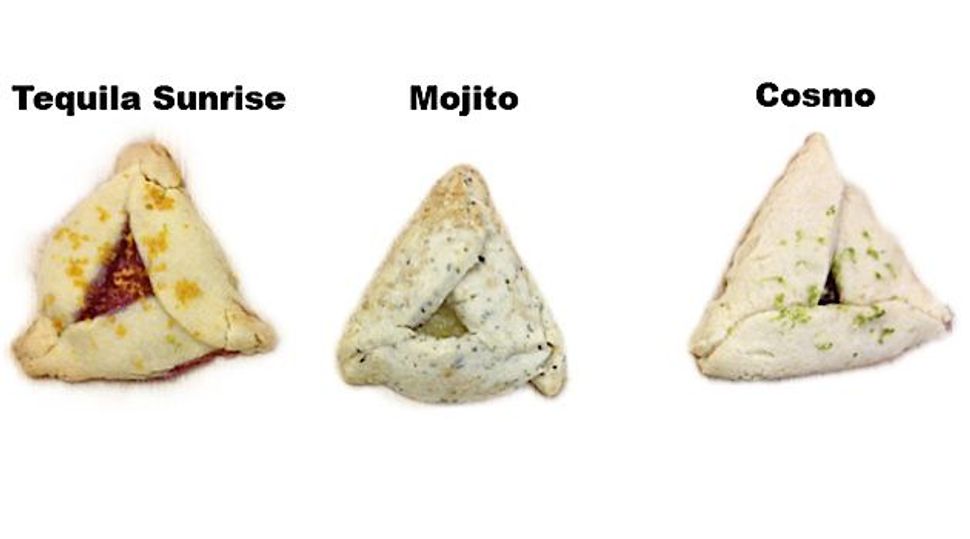 What kind of genius came up with the idea that prunes would make a great cookie filling, to be eaten without fail once a year?

Whoever they were, they were wrong.

But have no fear! We have a new hamantaschen option for you this year, and it’s as delicious as a cocktail, without the embarrassment that goes with actually being drunk at your family’s Purim party.

Alison Barnett has come up with a series of cocktail-themed hamantaschen that make regular old flavors seem like a too-sweet, dry and cakey distant memory.

“[The] two main things we consume on Purim are alcohol and hamantashen. I decided to combine the two into a real fun and creative dessert,” Barnett told the Forward. Her flavors include: White Russian, Tequila Sunrise, Mojito, Whiskey Sour and Cosmopolitan.

A mid-day snack tasting session by the Forward’s staff saw some clear favorites emerge: Whiskey Sour, treated with suspicion at first glance because of the ominous-looking maraschino cherry embedded in the crust, was actually a surprisingly pleasant mix of almond-sugar crust and citrus filling — not too sweet, not too tangy; White Russian was, as expected, a smooth combination of Kahlua and coffee flavors (though the extra icing drizzled onto the crust was unnecessary). Finally, Tequila Sunrise packs a citrus kick strong enough to lift any remaining winter blues.

Barnett first started experimenting with the idea three years ago. This is her first year actually selling the final product (to order on Etsy, click here). $21 will get you a dozen of these goodies — try getting that deal at a bar.

According to Barnett, she’s already thinking up new flavors for next year’s round. Irish coffee, anyone?

Until then, try your own version of the Tequila Sunrise at home (and take a few extra sips on the side — we won’t tell).

1 17.5 oz. Jar of Cherry Preserves (I love Trader Joes brand because whole cherries make up most of the jelly)
2 tablespoons Tequila

Dough: Stir together flour, baking powder and salt. In another bowl, beat butter until creamy. Beat in sugar until fluffy. Beat in egg, egg yolk, vanilla, and orange zest. Beat in flour mixture until combined. Divide dough in half and wrap each half in plastic wrap and refrigerate several hours or overnight.

Filling: Mix the cherry preserves with the Tequila. If you would like stronger, add 1 more tablespoon of tequila.

Preheat oven to 375 and line 2 large cookie sheets with parchment paper. Roll out refrigerated dough on a lightly floured surface, about 1/8 inch thick. Cut rounds with a drinking glass, until dough is finished. Fill the rounds with the cherry-tequila jam filling and with your pinky, dip in egg white and lightly wet the edges around the hamantashen. Make the hamantashen triangle shape by folding the bottom to make two corners and folding the top to make the 3rd (requires both hands).

Bake for about 12 minutes until lightly browned.

Bake Your Own Boozy Cocktail Hamantaschen