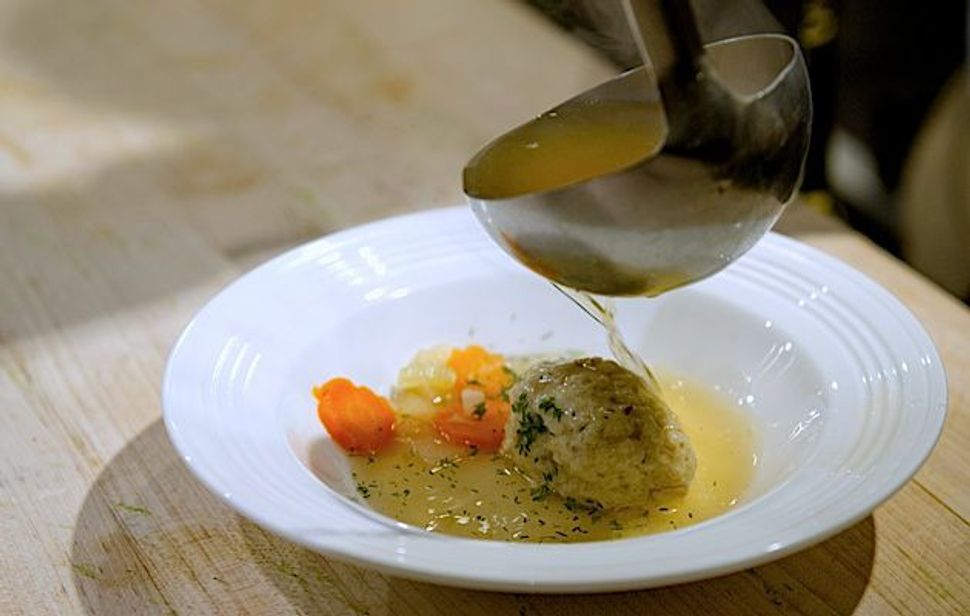 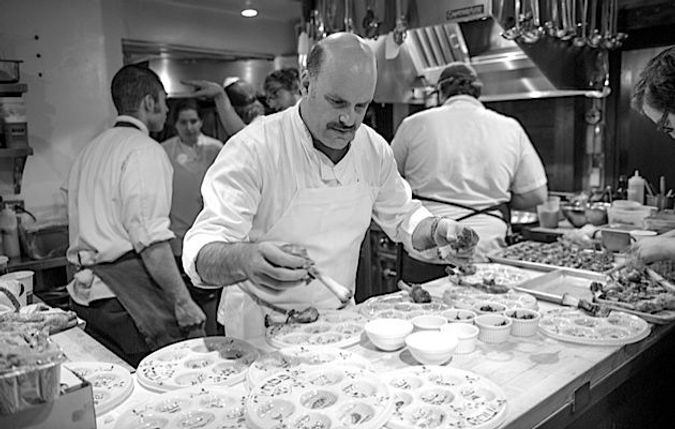 When it comes to making the perfect matzo ball, Mitchell Davis doesn’t believe in baking soda, seltzer or good luck.

He believes in his mother’s recipe. And really, really good chicken stock.

Davis should know — he is the executive vice president of the James Beard Foundation, the country’s most prestigious culinary organization, and a whisk-carrying member of the culinary elite. But on a personal level he is a devoted student of Jewish food, having started his career in a Jewish butcher shop in Toronto while still in high school, and later writing “The Mensch Chef: Or Why Delicious Jewish Food Isn’t an Oxymoron.”

In late March, in his light-filled 18th-floor home near Gramercy Park which he shares with his husband Dr. Nathan Goldstein, Davis is making matzo balls in a pre-Passover dry run. As Davis confidently whisks together the eggs, salt, chicken schmaltz and matzo meal, it is clear that he’s a practiced hand with the recipe. “The best part about writing a cookbook,” he jokes, “is that all of your recipes are in a book and they are indexed. I don’t even try to remember them.” It’s a good thing, too — bringing the matzo ball soup to his family’s holiday meals and to the wildly popular JBF Seder for 70 people is practically obligatory at this point.

“I’m hoping my mom doesn’t read this… I’ve never tasted a chicken soup so rich as Mitchell’s. If Escoffier had been Jewish, it’s what he would’ve made.”

The Seder got its start in 2011, when JBF hosted a pop-up restaurant at Chelsea Market that happened to fall during Passover. Davis says he became “obsessed with the idea of doing a Seder in this beautiful space with giant communal tables.” With help from George Robinson, author of “Essential Judaism: A Complete Guide to Beliefs, Customs & Rituals,” chef Aaron Israel (then of Mile End delicatessen, now of Shalom Japan) and some klezmer musicians, Davis threw a bang-up Seder with a menu that reinterpreted the Seder plate as a sophisticated multicourse meal. With such a successful event on his hands, Davis knew he had to make the Seder an annual tradition.

This year, some of the brightest stars of the new-Jewish food world, including Noah and Rae Bernamoff of Mile End and Michael Shemtov of Butcher & Bee in Charleston, S.C., will gather to create an inventive and rich meal. The 12-item menu is filled with dishes like chicken liver mousse with Jerusalem artichoke chips, lamb belly confit with charred bitter herbs, smoked whitefish gefilte terrine with citrus horseradish — and Davis’s soup.

It’s quite a departure from Davis’s family tradition of brisket, matzo farfel, flourless chocolate cake, lemon sponge cake with lemon curd and coconut macaroons, but it’s one that he loves. It seems that all of gastronomic New York is in agreement with him: The Second Night Seder regularly sells out within minutes, and chefs from around the country hound Davis to let them cook the meal.

As Davis’s matzo ball mix rests in the fridge for exactly 30 minutes (any longer, he says, and floaters start to turn into sinkers), he tidies the immaculate kitchen and chats with me about some of his time-tested tips and tricks.

For all those nervous to attempt their own take on matzo ball soup’s traditional hallowed place on the Seder table, he emphasizes that “my mother was never an exact cook, anyway.” Her recipe was based on one from a matzo meal box, and Davis modified his to reflect her slapdash measuring style. 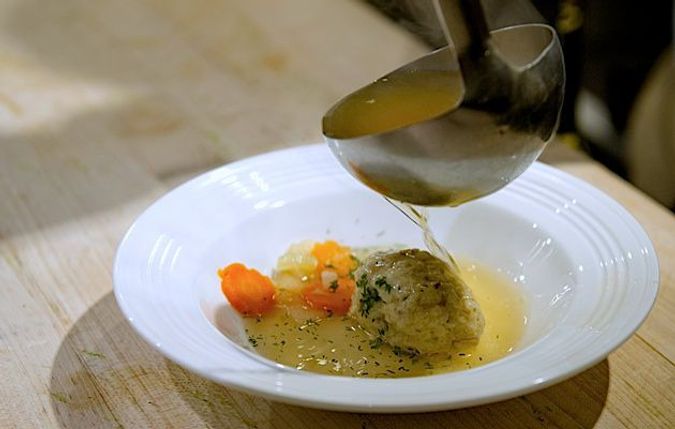 To give oomph to the flavor of the balls, Davis highly recommends asking your local butcher for leftover chicken fat and then rendering the fat at home, or saving it when you roast a chicken. In New York, he favors Florence Meat Market for the “old-school” feel, and Dickson’s Farmstand Meats in the “new-school” butcher camp.

“To make chicken soup taste as good as my mother’s, you’d have to drop a few ashes into the soup and leave a rubber band on the vegetables,” Davis says with a laugh.

We can verify that Davis’s soup doesn’t contain any of these foreign objects. In fact, many including Adam Sachs, editorial director of Tasting Table, have declared Davis’s soup to be the best they have ever had. Take Adam Rapoport, editor-in-chief of Bon Appétit magazine. He told me: “I’m hoping my mom doesn’t read this, but here it goes: I’ve never tasted a chicken soup so deep and rich and amber-hued as Mitchell’s. If Escoffier had been Jewish, it’s what he would’ve made.”

Davis’s smart but classic method for rich chicken soup results in a broth that will almost gel in the fridge. To start, Davis is an emphatic champion of chicken feet and older stew hens for deep flavor. He does not subscribe to the idea that skimming the stock is a necessity, and he believes “more is better” when it comes to aromatics.

“I think the secret is that a small turnip adds an amazing amount of sweet flavor, along with a parsnip, celery root, carrots, celery, a point of star anise, clove and some juniper berries. It’s not enough to taste, but to increase the complexity of flavor. And it’s really yummy, if I do say so myself,” Davis declares.

Once the soup goes through a three-hour simmer, fresh dill is added for some lively green zing. From there, Davis drains the stock and throws everything out, with the exception of the chicken meat, which he carefully reserves for chicken salad fodder.

With the timer of his iPhone softly dinging in the background, it’s time to form the matzo balls.

Davis is quick to point out, with each matzo ball, that he is “pressing it, not compressing it.” Overly enthusiastically rolling the matzo balls for too long in the palm of your hands only compacts and toughens them.

Once cooked, the matzo balls are transferred right from the cooking water into the fragrant and hot soup. As the matzo balls bob, dip and turn to their own bubbling symphony, Davis remarks, “Just like my mother’s, they are not perfectly made.”

Tressa Eaton is a Brooklyn-based freelance writer who writes about all things food. Most recently, she was the New York Editor of TastingTable.com.