The Best Matzo Ball Soup In The World 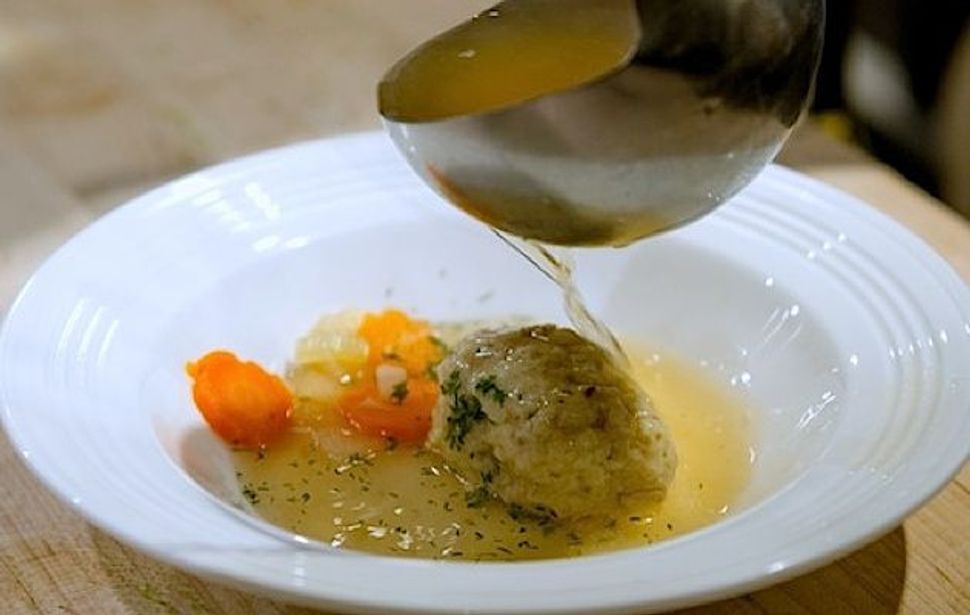 This recipe is reprinted with permission from “The Mensch Chef: Or Why Delicious Jewish Food Isn’t an Oxymoron.

This is an approximation of the matzo ball recipe my mother always used. It is based on the one on the matzo meal box, but with a few important modifications to account for my mother’s heavy hand with the schmaltz and her inexact measuring technique. When it comes to making fluffy floaters instead of sodden sinkers, I’ve tried all of the tricks: seltzer, baking soda, and others. But the only thing that seems to make a difference in the finished texture is how you handle them. For floaters, it’s best not to let the mixture sit in the refrigerator more than 30 minutes before shaping. Whatever you do, don’t work too hard to the mixture into balls — rolling the matzo balls around for too long in the palm of your hands compacts and toughens them up. Instead, coax them into a spherical shape, and don’t be too OCD about it. Also, be sure to have the chicken soup simmering when the matzo balls are ready, so you can put them straight into the hot soup. That way they retain their texture after cooling.

In a 12-quart stockpot, place the chicken, chicken feet, if using, onions, celery, carrots, parsley, turnip, parsnip, peppercorns, star anise, clove, and salt. Add 5 quarts cold water. Place over high heat, bring to a boil, skim off any scum that floats to the top. Set the cover ajar, turn down the heat to low so the liquid simmers, and cook about 2 hours, skimming occasionally, as necessary. Add the dill, if using, and simmer an additional 45 minutes or so. Turn off the heat and let cool.

Stain the soup through a fine mesh strainer into a clean pot. Remove the cooked chicken meat and reserve for a chicken salad or something. Discard the other solids. Chill the soup and then remove any fat that coagulates on the surface. You can also freeze the soup. If you’d like, you can freeze the soup at this point. To serve, reheat until boiling and add some chopped fresh dill, if you’d like. If you want to add vegetables for garnish, cook carrots, parsnips, turnips and other vegetables separately in a little bit of the soup, and pour it all back into the pot before serving.

You can double or triple this recipe as needed. (You can halve it, too.) Just be careful not to crowd the pot you are cooking the matzo balls in or they will not cook through fully.

Combine the eggs, salt, schmaltz and soup or water in a mixing bowl and whisk until blended. Using a fork, stir in the matzo meal and mix until smooth. Let set in the refrigerator for 30 minutes, until the matzo meal absorbs the liquid and the mixture sets near firm.

In a large pot, bring your chicken soup to a simmer. In a separate pot, bring about 5 quarts of water to a boil with 2 tablespoons of kosher salt. Remove the matzo ball mixture from the fridge. Wet your hands with cold water and shape a heaping tablespoonful of the mixture into a ball in the palm of your hands. Coax the matzo ball into a sphere. Rolling it too tightly will prevent it from achieving its puffiest. Drop into the boiling water and repeat with the remaining mixture, cleaning and wetting your hands as necessary to keep the matzo balls from sticking to your skin.

Bring the pot back up to a boil, turn down the heat to a simmer, cover tightly and cook for an additional 35 to 40 minutes, until the matzo balls have risen from the bottom of the pot and have blown up to about twice their original size. Occasionally a matzo ball or two will stick to the bottom of the pot. Give it a nudge with a spoon to loosen. Using a slotted spoon, remove the matzo balls from the boiling water and place them directly into the simmering chicken soup.

The Best Matzo Ball Soup In The World