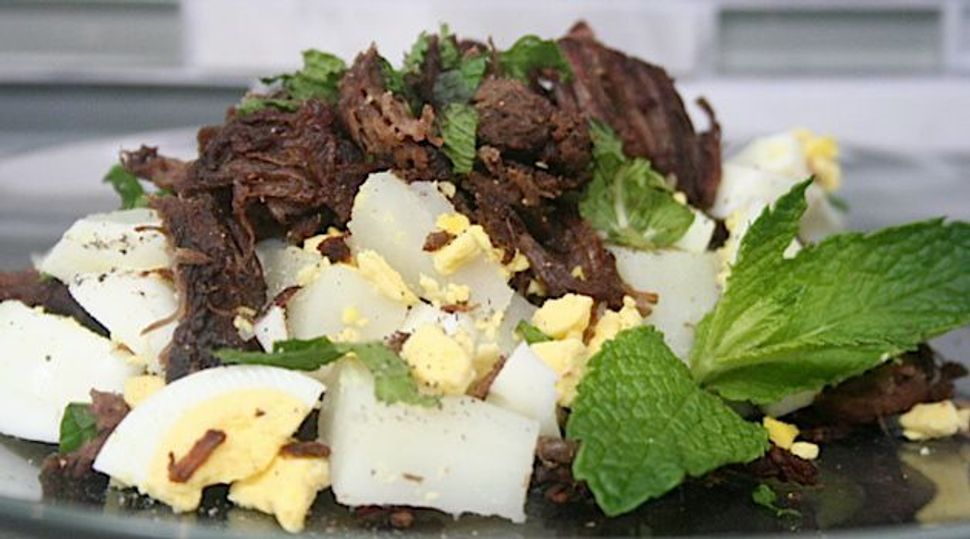 There’s a good reason we only eat Kalli’ah once a year. The Turkish inspired beef, eggs and potato dish is not for the faint of heart. Seriously, if you have high cholesterol, just stop reading now. But if you enjoy the succulent rich taste of confit, this is the perfect Passover dish for you.

This recipe was handed down to me by my husband’s family. Israelis since long before Israel was a democratic nation, his ancestors originally emigrated from Turkey but identify their cultural heritage as Nashdidanim — a Jewish group from the secluded mountainous boarders of Turkey, Iran, and Azerbaijan that dates back to the Babylonian exile. Many of their food customs resemble those of the Turks and Kurds with dishes that include stuffed grape leaves known as dolma and meat filled kubbe dumplings poached in soup or served fried. Kalli’ah is one of the community’s signature Passover dishes.

The word Kall’iah refers to the method of cooking the meat in Aramaic — it is fried in rendered fat or oil, also known as confit. The technique preserves meat, making it an excellent option for a long holiday like Passover. According to the website of the Nashdidan community, “Kalli’ah should be eaten with wet matza, alleviating the need for utensils,” another plus when faced with limited kosher for Passover dishes.

The ingredient amounts for the recipe are enough to sever upwards of 30-40 people but the dish is meant to be divided up into multiple meals over the course of a week. It is alos easily divided or frozen. The leftover beef is excellent when added to stews or omelets. Store the beef in an airtight nonreactive container, preferably a glass jar, in the refrigerator for up to two weeks.

1) Place the beef fat cubes in a large heavy stock-pot or a Dutch oven and cook on low-medium heat for 20-25 minutes until most of the fat has rendered into a liquid. Scoop out the remaining crispy brown bits with a slotted spoon, discard.

2) Add the beef cubes and teaspoon of salt to the rendered fat and cook on medium heat for 1 ½ to 2 hours, covered, stirring occasionally until beef is tender enough to be easily broken up with a spoon. Allow beef to cool in the pot until it is cool enough to handle. Transfer to a nonreactive airtight container, preferably a glass jar.

3) While the beef is cooking, peel and cut the potatoes into 16ths. Place in a large stock-pot and cover with water. Bring to a boil and cook for 10-15 minutes or until fork tender but not falling apart. Drain, cool, and store in an airtight container.

4) When ready to serve, heat a large skillet over medium heat. Add one cup of the cooked beef* to the skillet and break it up with a wooden spoon until beef resembles threads. Add 1 cup of potatoes, three chopped hard-boiled eggs, and one tablespoon freshly chopped mint. Cook until heated through, 8-10 minutes. Add salt and pepper to taste.

5) Reserve the remaining beef, eggs, potatoes and mint for a future meal.

*This amount serves approximately four people. For a larger portion, simply double or triple the amounts.