Stuffed Quinces with Mint and Pomegranate 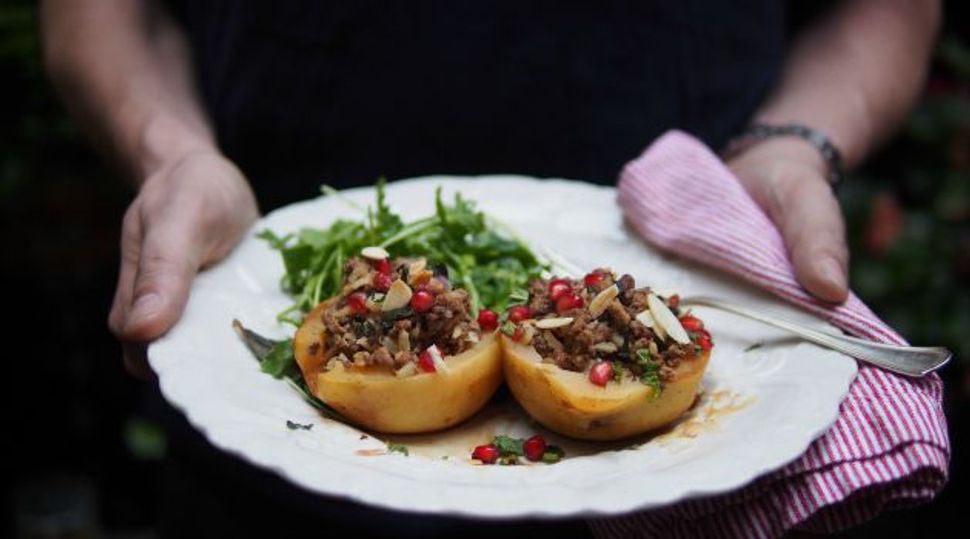 I had a wooden bowl of pale green pear-scented quinces on my kitchen counter all week. I wondered what I would do with them, and started flipping through my cookbooks, doing research. I’d already made quince paste this fall, and I liked the idea of taking my quinces in another direction.

It turns out that quinces appear in a wide array of Jewish fall dishes. In her “Jewish Holiday Cookbook” (Schocken), Joan Nathan writes of an Algerian chicken-and-quince tagine served at Rosh Hashanah. Claudia Roden mentions a similar dish in “The Book of Jewish Food” (Knopf), eaten by Algerian and Moroccan Jews the night before the Yom Kippur fast. In “Jerusalem” (Ten Speed Press), Yottam Ottolenghi and Sami Tamimi share a lamb-stuffed quince with pomegranate and cilantro, and it was here that I paused, because we are still in Sukkot, when stuffed dishes are served to symbolize the hope for a plentiful harvest (as I wrote last week when I made meat-stuffed peppers).

I had a lot of red meat last week, and wanted to try to lighten things up, so I gave myself the challenge of taking lean ground turkey and making it taste as savory as lamb. Since I often cook my lamb with garlic and rosemary, I added these ingredients, along with cinnamon, cumin, and allspice. For a hit of sweet tang, and because I was inspired by the “Jerusalem” recipe, which calls for it, I incorporated pomegranate molasses. If you can’t find it, add a splash of pomegranate juice instead, along with a couple of teaspoons of honey.

The only slightly hard part here is hollowing out the quinces. I used a sharp melon baller, and had no trouble at all.

1) Fill a large bowl halfway with water and add the juice of half a lemon. Cut quinces in half and hollow out with a melon baller, leaving quince walls ¼- to ½-inch thick. Place cut quinces in the water as you finish cutting each half and set aside. (Discard the cores but drop the scooped out fruit in the lemon-water.)

2) In a small bowl, combine the salt, pepper and other spices. Heat the oil in a large skillet. Add the turkey and sprinkle with spice mixture. Brown, stirring frequently and breaking up meat with a wooden spoon. Add rosemary, rice and pomegranate molasses and cook stirring occasionally, 2 minutes. Turn off heat and let cool slightly. Add egg and stir well to combine.

3) Spoon meat mixture into quince halves. When skillet that held the turkey mixture is empty, add reserved quince (that you scooped out of halves) along with chicken broth. Nestle quince halves into bed of quince and broth. Cover with a tight-fitting lid and simmer one hour. To serve, place one or two quince halves on a plate, top with a little of the pan juices and stewed quince, and sprinkle with pomegranate seeds, mint, and almonds.

Liza Schoenfein is the new food editor of the Forward. Contact her at schoenfein@forward.com.

Stuffed Quinces with Mint and Pomegranate