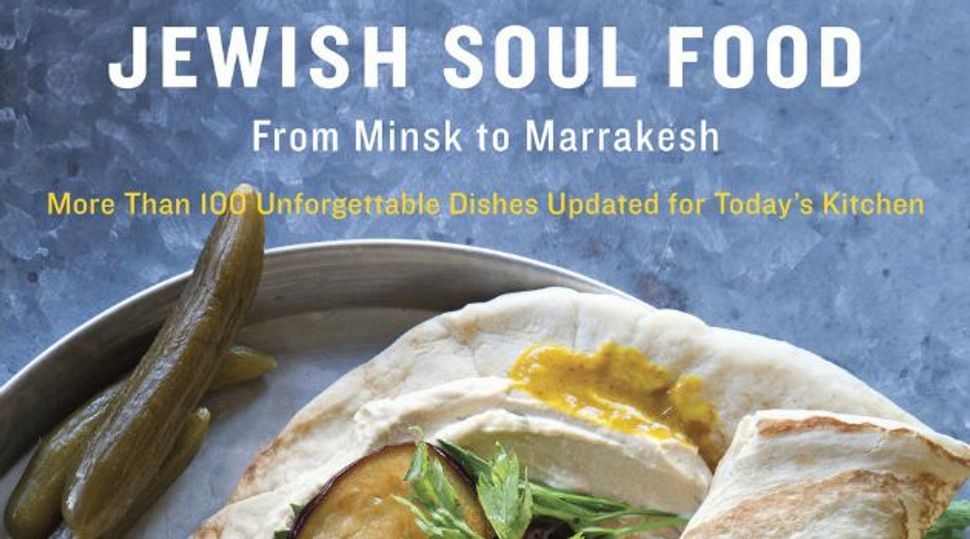 This is a sporadic column by Bay Area personal chef Alix Wall, in which she evaluates a new cookbook by making some of its recipes, sharing them with friends and asking what they think of the results. This time, she cooks her way through Israeli food authority Janna Gur’s new book.

When Janna Gur’s “Jewish Soul Food: From Minsk to Marrakesh” arrived, I knew right away that I had a special book on my hands.

Gur emigrated to Israel from Riga, Latvia, as a teenager. The author of The New Book of Israeli Food, she championed Israeli cuisine before Yotam Ottolenghi; before Einat Admony. Together with her husband, Ilan Gur, she founded and still edits Al HaShulchan, an Israeli food magazine. She is frequently sought out to speak to groups about Israeli cuisine, and at one dinner with some visiting journalists, she was asked why so little traditional Ashkenazi food was to be found in Israel. Part of preserving a people’s culture is preserving its food, this journalist argued. Gur didn’t disagree. Rather than seeking out Israeli versions of old favorites, with this book Gur goes back to the diaspora, while at the same time updating many classics.

While I recognized quite a few recipes from their counterparts in Ottolenghi and Sami Tamimi’s “Jerusalem,” and from the Ashkenazi cannon, so many dishes — especially from such places as Libya and Georgia — were completely new to me. And that’s what excited me most about this book.

I kept it on the coffee table until the night of my tasting dinner, changing my mind several times about what I would make. When I do these dinners, I sometimes try two dishes, sometimes more, depending on how busy I am and how much cooking I’m already doing that week. But this book got me so excited that I chose six dishes for the dinner party (though two were to make up the dessert, which I would serve as one dish), and then, when a butternut squash arrived in my CSA box, I decided it was fate intervening in the form of Nigel, my CSA farmer, telling me that I had to add another hors d’oeuvre, since I had all the other ingredients for that dish already.

So for my dinner party I made two hors d’oeuvres: chershi, a Libyan lemony pumpkin spread, and an updated chopped liver. For an appetizer, I chose a dish from Georgia (not the state), mainly because it sounded like one of the most intriguing recipes in the book, Badrijani Nigvzit, eggplant rolls with walnut and herb filling. Plus, it required pomegranate seeds, which are in season now — and I didn’t want to wait a whole year to try this dish.

For the main, I chose a dish from Morocco, herbed fish balls with Jerusalem artichokes, tomatoes and saffron, with a Moroccan spicy carrot salad on the side. For dessert, I combined a Sephardic cake called Basbousa — otherwise known as juicy semolina, coconut and pistachio cake — with an Ashkenazi red wine compote and poached pears.

If you’re wishing you were at my house last weekend, I can tell you that yes, your desire is justified. There were seven of us, and we all loved absolutely everything (except, ironically, the main dish).

Erez’ Chopped Liver, named after Gur’s favorite Israeli chef, Erez Komarovsky, blends seared chicken livers coated with cumin seeds, white and green peppercorns and mustard seeds with caramelized leeks for a non-traditional variation of the beloved dish that adds an unexpected peppery finish. One friend, Lisa, said, “I don’t usually like chopped liver but I like this,” while it was close enough to the traditional that another friend, Aaron, said he loved it purely for nostalgic reasons.

The Chershi, or Libyan pumpkin spread, was a surprise to everyone. Seasoned with lemon juice, olive oil, garlic and harissa, Mike compared it to hummus, prompting Aaron to say that it was way better than hummus. He loved how he expected it to be sweet, but found it so savory when he tasted it. Anthony was a little thrown off by this, missing the sweetness of the squash at first, but ultimately decided he liked it.

The Georgian eggplant appetizer was the favorite of the night. Eggplants are sliced thinly lengthwise and fried, and then are used to wrap a filling consisting of walnuts, onion, garlic, parsley, cilantro, spices and white wine vinegar, which are blended together before adding the pomegranate seeds. I had no clue what this would taste like, and was afraid the raw onion and garlic might overwhelm it, but I was completely wrong. While Aaron guessed walnuts were the main ingredient, no one else could, because the dish had such a unique flavor. Jeff said he felt pomegranate seeds tend to be overused these days, but loved their addition here. Paulie said the parsley and nuttiness reminded him vaguely of tabbouli. Anthony felt it was a bit like a boureka, with the eggplant serving as a pastry-like wrapper around a rich filling. Aaron, whose brother-in-law is Georgian, by way of Israel, had the most experience with Georgian food; he called it “elevated Russian food,” and said that he thinks it’s going to be the next big thing. (You heard it here, folks.)

The spicy carrot salad recipe is such a classic that I almost didn’t bother with it. Everyone who has been to Israel has had some version of it; blanched carrots in a lemony-cumin-garlicky dressing with fresh parsley or cilantro. While I was tempted to try something different, I chose this one deliberately because it called for preserved lemon and harissa. The preserved lemon takes the dressing and the salad to a whole new level, causing Mike to say, “When you compare this to carrot tsimmes, you know why Sephardic Jews are so much happier than we are.”

The fish was the only dish in the bunch that wasn’t a winner in our book. Jeff was the kindest, liking how light in texture the fish was. But the rest of us felt it was missing something. While the recipe called for 15 strands of saffron, and I used more than that amount, none of us detected its delicate flavor at all. Aaron felt the sauce needed more acid in the form of more tomatoes and lemon juice, while Lisa would have upped the parsley in the fish cakes (there was already a lot of cilantro in both the cakes and the sauce). I felt the Jerusalem artichokes were in the sauce too long (even though I followed the recipe exactly), and therefore came out mushy; we all felt that compared to the rest of the meal, this dish was the anomaly.

By dessert everyone was happy again. The flavor of the semolina cake was exceptional. I used coconut milk in place of half-and-half to make it parve, a suggested variation. As far as parve desserts go, this is an excellent one, and everyone appreciated its delicateness and that it wasn’t too heavy. The red wine compote and poached pears complemented the cake beautifully.

By the end of the night several guests said they definitely planned to buy “Jewish Soul Food,” which is the greatest endorsement they could give.