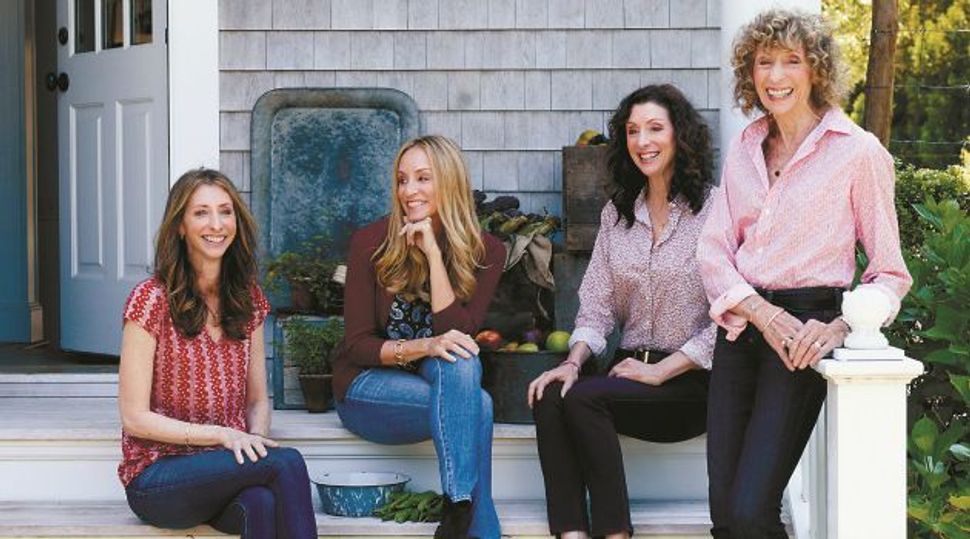 Foodie Family: The Pollan women are (from left to right) sisters Dana, Tracy and Lori and their mother, Corky. Photograph by John Kernick.

The members of my family are, for the most part, smart, accomplished, attractive and close to one another. I’ve always been pretty keen on them. But now that I have a window into another family, the Pollans, I sort of feel as if my own is somehow lacking.

Of course I knew that Michael Pollan was basically the spiritual leader of the sustainability (and sensible eating) movement in the United States. I knew that Corky Pollan was the writer whose Best Bets column I always flipped to first when she was at New York magazine. I knew that Tracy Pollan played the smart, beautiful girlfriend of Alex P. Keaton on the 1980s sitcom Family Ties, and that she later married her leading man, Michael J. Fox.

But I didn’t know — did you? — that all of these Pollans (along with two more beautiful and accomplished sisters, Lori and Dana) were members of the same nuclear family.

Apparently, they were raised on big, home-cooked meals, influenced in large part by the examples of Corky’s father, Grandpa Max, who picked homegrown fruit and vegetables from his garden, and her mother, Grandma Mary, for whom “feeding her children and grandchildren was how she expressed her love,” according to Lori in the book’s introduction. (Corky and each of her daughters has a voice in this intro and throughout the book, with Michael contributing the forward.) “She was a remarkable cook,” Lori continued, “but her real passion was for baking, especially the traditional Jewish sweets that she had learned from her mother, Tzena.”

Along with recipes for her apple strudel and nut cake, Grandma Mary’s mandelbrot is in the book — and reprinted here.

The Pollan family table now includes Corky’s 11 grandchildren, so she and her husband , Stephen, added an extension to their dining room table, “until we literally burst through the dining room wall,” Corky said, “to create a new wing that jutted out into the driveway before we finally had a room long enough to comfortably accommodate all 21 of us.”

In addition to the recipes contributed by all the various family members, the book includes cooking advice and family anecdotes, as well as helpful lists of kitchen essentials and pantry items.

The recipes seem lively and healthful (if often not the least bit kosher), ranging from the straightforward, such as the pan-seared salmon with salsa verde, to the more complex, like the citrus-roasted chicken with Grand Marnier, which I made for my family last Friday night. The dish involved a number of steps, from marinating the chicken to draining it, to browning it, to roasting it; then broiling the citrus slices and reducing the sauce once the chicken had cooked. There was a moment when I thought this was all a bit much, but the resulting dish was extremely delicious and festive — very popular with my little brood. Grandma Mary’s mandelbrot cookies, loaded with raisins and nuts and dusted with a cinnamon-sugar topping, were also quite the crowd-pleasers, though they, too, seemed to require an extra (if ultimately successful) step or two.

If you’re as enthusiastic in the kitchen as the Pollan clan, then this collection of recipes will be a welcome addition to your repertoire. And if you’re not, you’ll likely still enjoy a colorful and informative window into the world of one irritatingly accomplished, attractive and culinarily adept family of fressers.

Liza Schoenfein is food editor of the Forward. Contact her at schoenfein@forward.com.