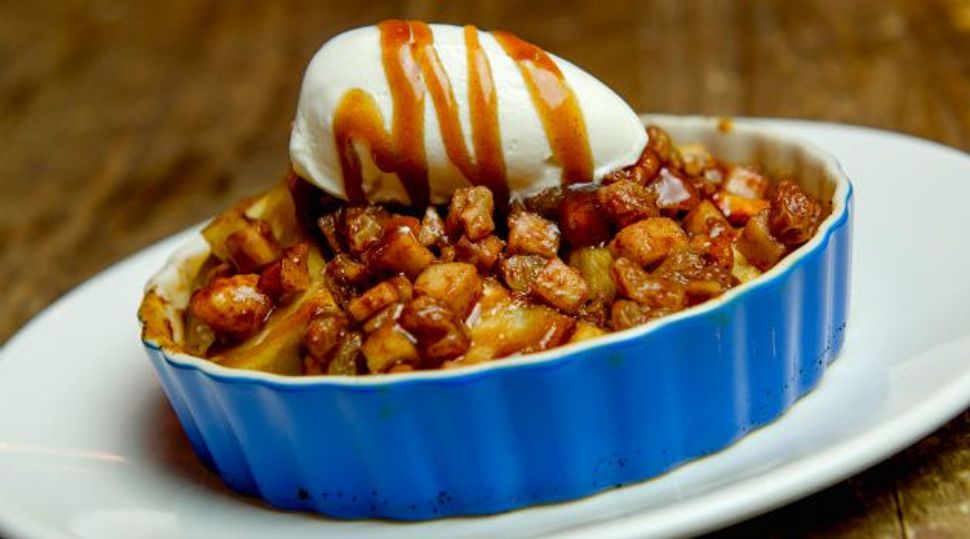 Everyone loves a good apple pie. Growing up in Brooklyn, in the primarily Jewish neighborhood of Midwood, meant eating lots of traditional sweets like apple strudel and rugelach. I always loved the texture of nuts and fruit together, specifically, that sweet but tart profile combining with nuttiness and cinnamon. At Seder time, we would have the charoset. So when developing the [Little Beet Table] menu, I knew I wanted to offer “apple pie.” Since we are a gluten-free establishment and one that generally focuses on a healthier way of life, I thought to myself, how can I add some texture to this dessert without a fattening crust? So, I immediately turned to my heritage and the beloved charoset. I added some vanilla bean to it to heighten the flavors and bring it back to an American apple pie profile.

To make the dessert parve, oil can replace the butter in the caramel sauce (same measurement) and you can use a non-dairy whipped topping instead of the Battenkill whipped cream.

Method: Combine all of the ingredients together in a bowl and allow to macerate for a minimum of 2 hours.

For the apples
9 apples (a combination of Granny Smith and Gala recommended), peeled and sliced 1/8 inch thick (use a mandolin if you have one) and reserve in acidulated water.

Method:
In a 2 quart stainless steel pot, melt the butter and add the cornstarch. Cook for two minutes, whisking constantly until it resembles a roux. Continue whisking and gradually add the apple cider. Add spices and sugar and bring to a boil. Add rum and bring back to a boil. Remove from heat, let cool slightly then pour into a blender and blend until smooth. Set aside.

Method:
Cream the butter and sugar together. Add the eggs and vanilla and continue to beat. Add the dry ingredients (flour, cream of tartar, baking soda, salt and cinnamon) until incorporated. Set aside.

Method:
In a large mixing bowl, beat cream, sugar and vanilla bean pulp. When the cream reaches stiff peaks and you can draw a figure eight in it, you are done.

Procedure for assembly:
Evenly distribute the apple slices between the bakers’ ramekins. Top with spoons of snickerdoodle crust, dotted unevenly across the top of the apples (do not cover the apples completely with the crust as it will expand in the oven). Sprinkle cinnamon liberally on top of the crust. Bake in a preheated 350˚ F oven for 25-30 minutes.

When it is finished baking top with the charoset and set aside to cool for 15 minutes before topping it with the whipped cream.

Franklin Becker is chef/owner of The Little Beet