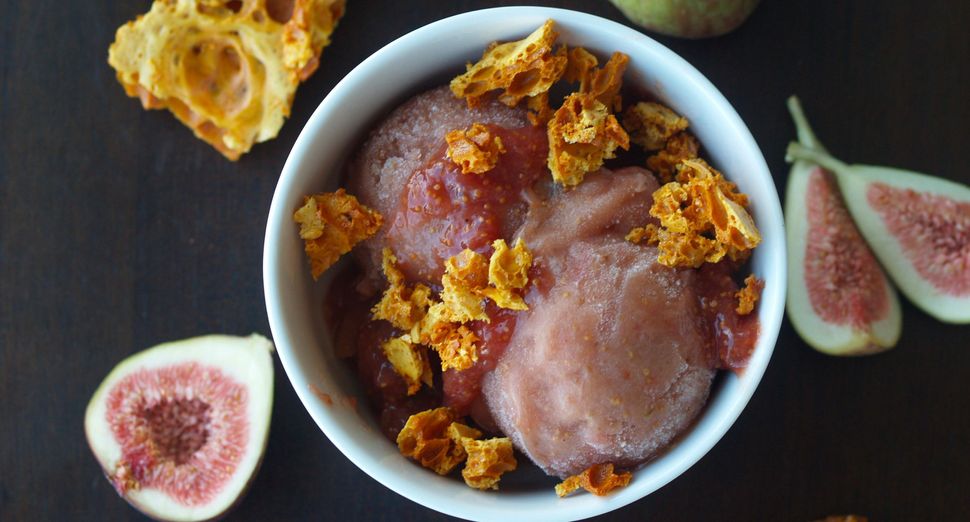 Biting into a fresh fig in Sicily, the author found herself mumbling a shehecheyanu — and was inspired to create this refreshing dessert.

Until recently, what little I knew about Sicily came from Sophia Petrillo’s stories on “The Golden Girls.” Spending a week at the Anna Tasca Lanza cooking school last June, though, gave me a proper introduction to the rich landscape of this large island. I was there for a course on food writing and found myself smitten with Sicilian culinary heritage.

This year I’ll be celebrating the Jewish holidays with an eye toward incorporating into my own traditions the foods I tasted in Sicily.

Early on a Monday morning I flew to the island’s largest city, Palermo, and took a bus into town. There I met up with Susie, another student attending the workshop. We shook hands, awkwardly hugged, dropped our luggage in a storage room at the train station and set off to explore the city. With only a few hours before our connection, sightseeing options were limited, but no matter: Our only goal was gustatory.

Susie navigated us to Mercato del Capo, the souk-like market that’s a testament to Sicily’s long-ago Arab rule. We stopped in front of the largest jar of Nutella I have ever seen, a beckoning hand dipping strawberries and offering them up. Our loyalty was easily bought. At the sight of a 10-euro banknote, the vendor filled a paper cone with berries and another with plums.

I pointed to a pile of green fruits, shaped like Hershey’s kisses, each about the size of my fist. The vendor held one up — “Fichi!” he said. “Figs,” Susie whispered — and ripped it open, swiping each half in the chocolate spread before handing them over. While we chewed, he piled figs into two more cones. “Basta, basta!” Susie cried, holding up her hands like a crossing guard stopping cars. Our vendor indicated that he had no change for our bill and emptied a box of cherries into a final cone, making sure we got every last cent’s worth.

After wandering the stalls, Susie and I plopped ourselves down in a shady spot. I fished out a fico and weighed it in my palm, its bottom felt heavy like a water balloon and I saw a few crystallized beads of sugar escaping from a small crack in the skin. I tore it open and lapped up the dripping flesh, feeling the seeds crackle between my teeth, and letting the sweet juice pool in the dust at my feet. Until that point, I had never actually enjoyed eating a fresh (or dried) fig. I found myself mumbling a shehecheyanu and explaining to Susie the Rosh Hashanah tradition of saying a blessing over a new fruit that you hadn’t eaten all year.

As I prepare for the New Year, I wanted to re-create that first taste of fruit in the heat of the Sicilian sun by making a refreshing sorbet. 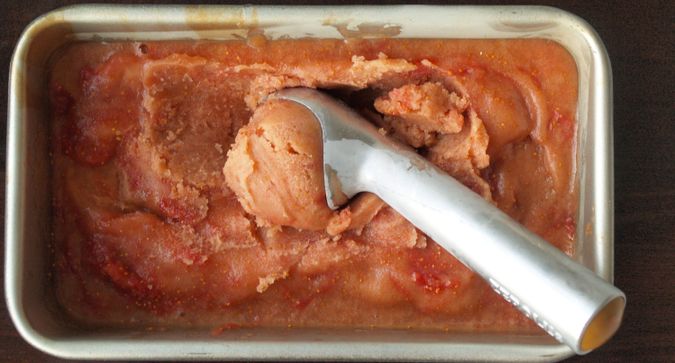 This recipe is inspired by the decadent fresh figs I ate in Sicily this summer and is adapted from sorbetto di fichi in Fabrizia Lanza’s “Coming Home to Sicily.” I used green Calimyrna figs, but black ones will do just fine as well. At the they serve the base recipe with freshly whipped cream.

For Rosh Hashanah, I wanted to add in some honey elements. The fig and honey swirl provides some textural contrast, as it is thicker than the sorbet itself, like a ribbon of fudge in a decadent chocolate gelato. You’ll need a scant three pounds of figs total if you’re going to make the sorbet and the swirl. For a nice crunch, crumble the honeycomb candy over top.

Makes about a quart of sorbet

1) Peel. Slice the stem off the figs. Peel by sliding the tip of a knife under the top layer of skin and grasping it with your thumb, pulling towards the opposite end in long strips. You’ll be left with a thin layer of white pith around the pink flesh. You’ll end up with 1½ pounds or about 3 cups of peeled figs.

2) Puree. In a blender, puree the peeled figs, port and/or water, lemon juice and sugar until very smooth.

4) Freeze. Freeze the cold mixture in an ice cream maker. Once the sorbet has finished churning, dribble in the cooled fig and honey swirl and gently stir to distribute it but not so much that it disappears. Transfer to an airtight container and put in the freezer to firm up for a few hours or overnight.

5) Serve. Scoop into bowls and sprinkle with crumbled honeycomb candy. 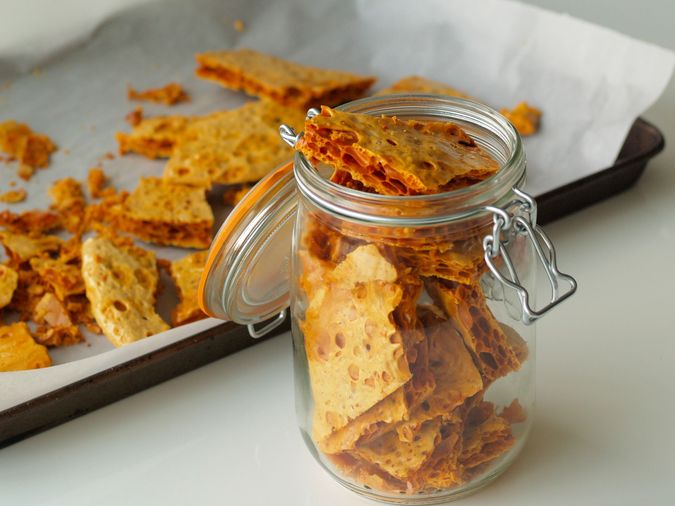 This candy is adapted from a recipe that the pastry chef at Marta gave me. You do need a candy thermometer. This is an edible version of the volcano experiment: Baking soda (a base) reacts with hot honey (acidic) to form carbon dioxide bubbles that get trapped in the candy as it cools and hardens. But please be careful: Hot sugar can burn, so don’t let kids get too close.

In the restaurant, we crumble honeycomb candy over vanilla gelato drizzled with extra-virgin olive oil in a twist on affogato. This candy is also known as seafoam, hokeypokey, and, when coated in chocolate (I prefer dark), is similar to Australian Violet Crumble. It’s fun to have a jar of it in the kitchen for sweet honey snacking over the Rosh Hashanah holiday.

1) Prep. Line a half sheet pan (18” X 13”) with parchment paper. Sift the baking soda into a small bowl. If you don’t sift, you might happen upon a nubbin or two of unpleasant tasting baking soda in the middle of your candy.

2) Heat. In a large pot (the mixture will expand about four-fold, so make sure your pot is big enough!) over medium heat, mix the sugar, honey and water. Clip a candy thermometer to the pot. Over the span of about 5–7 minutes, the syrup will bubble gently and then darken to a golden brown at around 290° F. Stand over the pot because the last stage goes quickly and you don’t want burnt sugar.

3) Pour. Once the syrup hits 300° F, pull out the thermometer and pour in the sifted baking soda. Stir 2–3 times with a rubber spatula (not too much or you’ll deflate the mix) and the syrup will lighten, turn opaque and quadruple in size. Carefully tip the bubbling mess onto the lined sheet pan — it will look like a big blobby monster crawling out of the pot. Let it spread out on its own and resist the urge to touch it — it’s hot and can burn and also too much fussing will break the bubbles.

4) Store. When completely cool, break into pieces and store in an airtight container.

This fig and honey compote is also great over vanilla gelato or mixed into your morning yogurt.

1) Heat. Over a low flame, heat the figs and honey for approximately 10 minutes until the figs break down into a thick syrup. Pulse with an immersion blender until only small pieces of fig remain. Cool in refrigerator for 2–3 hours.