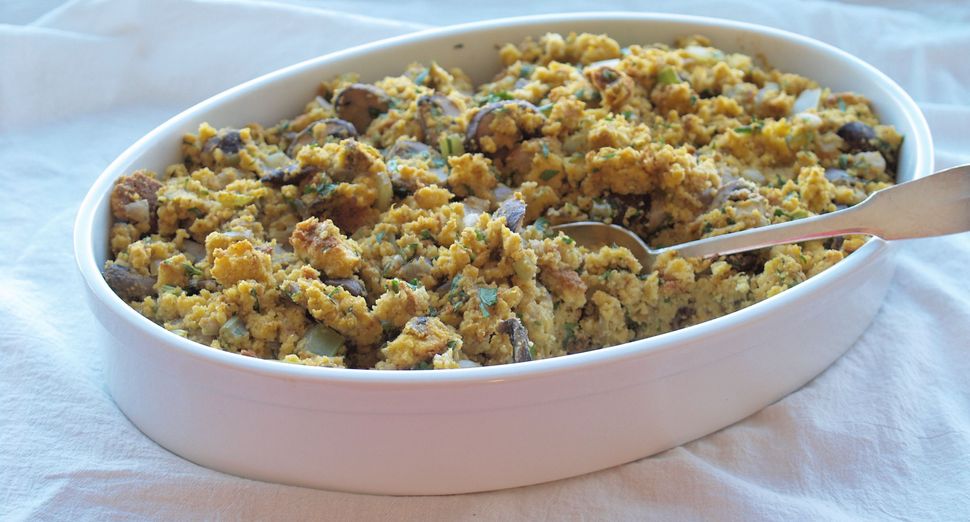 This parve cornbread stuffing starts with homemade dairy-free cornbread, which gets its moisture from easy-to-make creamy corn “milk.”

My family’s Thanksgiving stuffing tradition is Pepperidge Farm. Those salty croutons flecked with a mix of herbs and spices, tossed with cooked celery, onions and mushrooms, and drowned in broth before being toasted in the oven (we never stuffed our bird) — well, it’s hard to beat that. But this year, I’m going to mix things up a bit and make stuffing from scratch. I’ve been in the mood for cornbread stuffing, so I decided to create a parve version to go with the turkey.

I’ll start with dairy-free cornbread. A few years ago, I researched from-scratch parve cornbread recipes for a Southern barbecue-themed Shabbat dinner. Determined not to use anything fake — no margarine, no soy milk and definitely no non-dairy creamer — I came across a recipe that created a milk substitute out of corn. You process a hefty amount of fresh or frozen kernels with water and oil for a good two minutes, yielding a creamy corn liquid. That’s your moistening agent and it gives the bread an intense corn flavor. I make my cornbread on the sweet side and sometimes add a sprinkle of cayenne for a kick.

Next week, I’ll bake up a fresh skillet of cornbread, crumble it and dry it overnight or in a low oven for 20 minutes. Onions, celery and mushrooms cooked down with thyme will round out the recipe. I’ll douse the whole thing with stock and toast it in the oven.

And hopefully, my family will never want stuffing from a box again.

Pureeing corn with water in a blender for a couple of minutes creates a thick non-dairy substitute for the milk that’s normally in cornbread. (Adapted from “Cooking Light Annual Recipes 2004 Cookbook.”)

2) Blend. In a blender or food processor, blend the corn, oil and water for two minutes until smooth. Add the eggs and pulse a few times until combined.

3) Mix. In a medium bowl, mix together the flour, cornmeal, sugar, salt and baking powder. Add the wet mixture to the bowl and stir until incorporated.

4) Bake. Using an oven mitt, pull the cast iron skillet out of the oven and drizzle with oil, swirling to cover the bottom and sides of the skillet. Add the corn bread batter to the skillet and bake until the top is golden and a toothpick comes out clean, about 25 minutes.

Prepare the cornbread recipe and then crumble and spread out on two sheet pans, allowing to dry overnight or for 20 minutes in a 150˚ F oven. (Adapted from the New York Times.)

2) Saute. In a large, deep skillet, heat butter over medium heat. Add onion, celery and garlic. Sauté, stirring for 5–7 minutes, until tender. Add mushrooms and thyme, and season with salt and pepper. Continue cooking until the mushrooms release their liquid (about 5 minutes) and then resorb it (another 10 minutes). Taste for salt and pepper.

3) Mix. In a large bowl, combine the mushrooms, parsley and cornbread. Mix in the stock to moisten the cornbread. Transfer to greased baking pan.

4) Bake. Cover the pan with foil and bake for 20 minutes. Uncover and bake until the top is lightly browned, another 15 minutes. Serve hot.

Gayle Squires is a food writer, recipe developer and photographer. Her path to the culinary world is paved with tap shoes, a medical degree, business consulting and travel. She has a knack for convincing chefs to give up their secret recipes. Her blog is