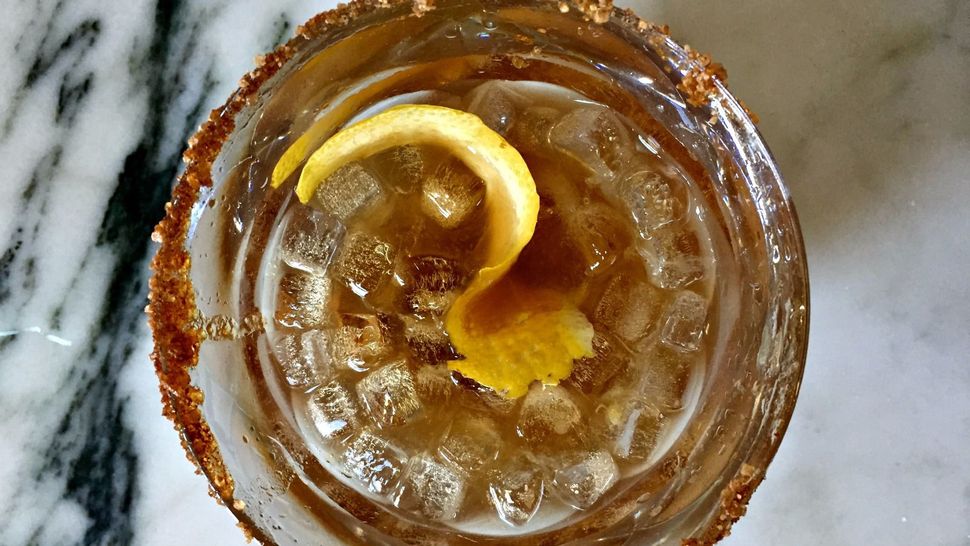 Merrymaking and over-indulgence are encouraged in Purim celebrations. Esther’s good looks, luck and wherewithal saved the Jews in the Persian Empire from being annihilated. What followed, on the 14th of Adar, was the world’s first Purim party, an occasion of great levity.

Purim is an occasion to be loose, relaxed and happy, and, perhaps, to drink something heady as a change from wine. Inspired by the revival of Old World spirits and craft cocktails, I turned to Boukha, a product that, like Purim itself, carries the theme of survival.

Boukha Bokobsa eau-de-vie is a brandy distilled from figs. It is a clear spirit, unsweetened, with the gentle taste and aroma of fig. It can be consumed on its own as an aperitif or a digestif, or used in a cocktail. Boukha was developed in 1880, in Tunisia, where Abraham Bokobsa lived and grew citrus fruits, figs and dates. His son, Jacques Bokobsa, traveled to Normandy, France, to perfect his distillation technique. He presented Boukha at the 1897 Brussels International Exhibition, where Leopold II, King of Belgium, tasted the brandy and reportedly loved it. It received the contest’s silver medal.

From then on, Boukha Bokobsa increased in popularity in Tunisia and became the national drink. When the brandy distiller was in its third generation, anti-Semitism caused the Bokobsa family to immigrate to France, and by 1966 the company had moved its production there. The original Bokobsa distillery remains functioning in Tunisia, making Bokobsa for the domestic market. The sixth generation of Bokobsas currently runs the company in France.

The Bokobsa fig grogger is an adaptation of the late 19th-century “cobbler cocktail,” a fruit-driven, shaken concoction made with the spirit and with fruit syrup. Shake vigorously with ice, and prepare to enjoy this deliciously refreshing drink at Purim — or at any festive occasion.

1) Muddle the lemon in the bottom of a cocktail shaker, fully extracting the juice and oils from the skin.

3) Strain into an old-fashioned glass filled with a few ice cubes. Garnish with dried fig and lemon peel. Optional: Rim the glass with cinnamon and brown sugar.

Note: Fig syrup comes premade and is available at specialty food stores. It can also be prepared in advance by boiling a dozen fresh figs (quartered), 1 cup brown sugar and ½ cup water over medium-high heat until fig is liquefied. Strain and cool before using. If figs are not available, simple syrup or sweet sherry can be used as a substitute.

Sadie Flateman is a professional wine buyer and a specialist in wines of Israel. She lives in New York and has a big appetite. Find her on Twitter @Sadie67Wine.