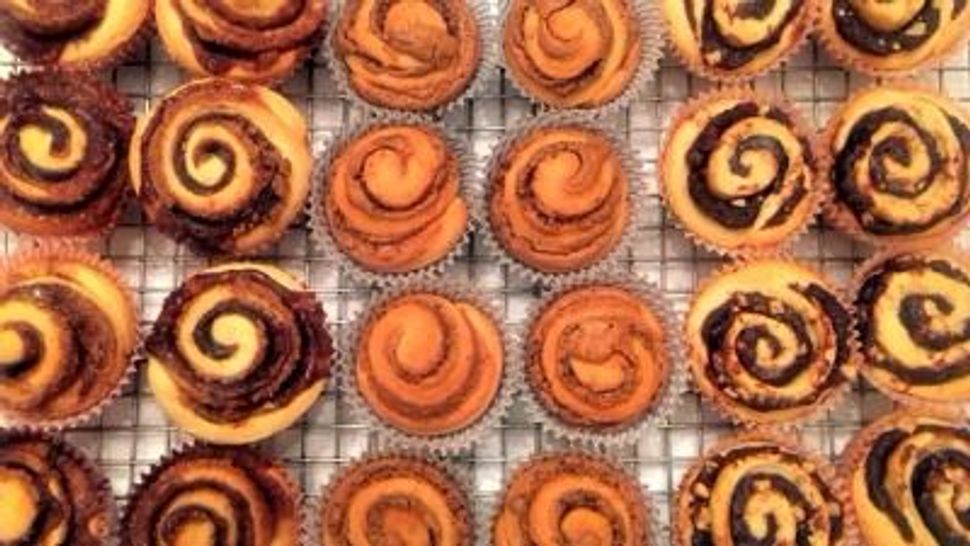 Inspired by the shape of megilla scrolls, these cinnamon buns (still unglazed above) make mouthwatering mishloach manot, or purim gifts.

Both the Gregorian and Hebrew calendars have given us a little wiggle room this year with an extra day — February 29 — and an extra month — Adar Bet. Many people welcome the month of Adar with the phrase mishenichnas adar marbim b’simcha — “he who brings in Adar (when Purim occurs) increases joy” — so a year like 5776 is doubly lucky with its two months of joy.

It’s also particularly fortunate for someone like Ellie Levi — architect by day; baker by night; and non-profit board member in the moments when she’s not in the office or kitchen. (Disclaimer: She’s also my friend.) Since this year’s Adar Aleph, she has been perfecting her recipe for cinnamon buns to fill boxes of mishloach manot, food packages sent to friends on Purim. Which is fortunate for us too, because she’s sharing her recipe and ideas about how to make this Purim a decadent and meaningful festival.

When Levi and I we recently spoke about the elaborate mishloach manot that she and her family have prepared and shared over a lifetime of adventurous and elegant gastronomy, she explained to me, “This is our joy for Purim. Our joy is actually in the kitchen and working together.” Growing up, it was not uncommon for the whole family to band together, pulling baking all-nighters in advance of the Purim. Like the year when they made dessert pizzas — a rainbow of exotic fruits arranged on a layer of sweet cream cheese atop a large sugar cookie — and packed them in boxes begged from local pizzerias. Because, when you’re artistic, the wrapping matters just as much as the treats.

Levi’s love of Purim was one of the first things I learned about her when we met over a decade ago as new members of the Philadelphia Jewish community. While I was preparing my own last minute michloach manot, i.e., a plastic bag of candy centered on a flimsy paper plate that I folded into a tri-cornered “hamantaschen” and secured with a few clicks of my stapler, she had gone home to Brooklyn the weekend before the holiday to join her sister and mother for their annual kitchen ritual and then stayed for the seudah Purim feast.

Back in Philadelphia, Levi gifted me a box papered in scenes copied from a hand-painted megillah from 13th-century Persia and filled with Persian delights, an assortment of homemade baklavas (three kinds, of course!), cardamom-scented cookies and saffron rice pudding.

Over the years, Levi and I have lived in different cities and we haven’t often been able to exchange mishloach manot. But the family keeps a photo album of Purims past that I flip through whenever I visit. Some years rely on puns and wordplay, like shushi — little cakes decorated to look like sushi rolls from Shushan, the city where the Purim story takes place. One year was a country picnic basket complete with five different breads, grapes, cheese and wine. Another year, a fondue kit of chocolate in a covered microwave-safe bowl and skewers of fruit, cake and marshmallows.

Lately, Levi has focused on presenting variations on a single dessert: tiny tartlets with 12 different fillings, half a dozen whoopee pies, a bouquet of decorated cake pops. This year is inspired by the shape of a megilla scroll, with all her mishloach manot and seudah foods in rolled form.

Which brings us back to the cinnamon buns that Levi has spent the past several weeks refining. Over the phone, we discussed how she compared published recipes for cinnamon buns, babka and even biscuits, experimented until she settled on formula that was easy to roll, holds up in the freezer and tastes divine. Because the dough contains yeast, each trial run required several hours to allow the pastries to rise. In her evenings and Sundays, Levi has baked eleven different riffs on the classic cinnamon bun. Lucky leap year indeed.

The bun flavors run from traditional cinnamon to the more exotic: a poppy seed paste similar to mohn hamantashen filling, halva spread and chocolate chips, dates and walnuts, and a syrupy fig mixture. You can choose your own adventure, as long as the fillings are substantial enough not to ooze out of the buns into a sticky mess.

And while she dedicates so much time to culinary displays on Purim, Levi points out, “it’s more important to spend more money on matanot l’evyonim, gifts of charity.” She is on the board of American Friends of Bat Melech, the only home for Orthodox victims of domestic abuse in Israel. Even here, she combines generosity with skill in the kitchen. On a visit to the shelter several years ago, she taught a cake decorating class to residents, a way to bring a sense of normalcy and beauty to those who have survived difficult times.

As Purim approaches, feel free to spend a little extra time with family and friends in the kitchen. Levi has created an easily adaptable recipe so you can roll and bake up your own megilla scroll.

1) Prepare the yeast mixture in a one cup measuring cup. Let it sit for 10 minutes.

2) Prepare the dough by first mixing the sugar and oil till combined in the bowl of a standing mixer on low speed. It is important to keep the mixer on low speed the entire time or else the ingredients will fly up and out of the bowl!

3) Add the eggs one at a time and then the salt and milk or juice.

4) Add the flour one cup at a time, by stopping the mixer in between cups. After the sixth cup of flour is added, turn the mixer off and slowly pour the yeast mixture into the dough. The dough will be thick and dry at this time. Then turn the mixer back on and slowly sprinkle in the remaining seventh cup of flour till incorporated. Stir this mixture till it comes together.

5) Turn out the dough on a floured surface and use a flexible bowl scraper to pull off the dough sticking to the sides of the bowl. Sprinkle on as much flour from the reserved half cup of flour as needed to bring the dough into a smooth ball. Knead the dough lightly by hand. The end result will be a dough that will be smooth and not sticky. Do not add too much flour though – the dough will be ‘wetter’ than a challah dough. Don’t overwork the dough either or else it will become tough.

6) Put the dough ball into a lightly oiled bowl and cover with plastic wrap. Let it rise for 2 hours in a warm place.

7) Make the filling by mixing the sugars and cinnamon with a whisk. Then pour in the oil and use your hands to incorporate it. The final mixture should resemble moist sand. If you need a little more oil you can add in small drops.

8) Remove the dough ball from the bowl and divide into 4 equal parts. On a floured cutting board, roll out each ball one at a time into a rectangle.

9) Fill with desired filling (see note below) — or the cinnamon brown sugar filling as above. Spread out the filling to a 1/4” of the edges of the dough and then carefully and tightly roll up jelly roll fashion starting from a long side to create a log shape. When finished rolling, make sure to place the log seam side down on the cutting board. You can slightly stretch the log at this point to make it longer. It should be a little longer than 12 inches.

10) Cut off the ends at both sides and discard. Use a very sharp knife to cut the log into 1-inch slices [measured with a ruler]. Place them face up into cupcake papers inside muffin tins. [It is not recommended to place these inside the muffin tins without cupcake papers as the fillings will ooze out and stick to the pan.]

11) Let rest and rise again for half hour.

13) Prepare icing while the buns are baking by sifting the confectioners sugar into a bowl. Then add the water and oil in tiny amounts. It will look like too little at first but the more liquid you add the runnier the icing will be. Keep at room temperature or near [not on] the hot oven as the buns are baking so that the icing will be liquid enough to pour. It is best to scrape the icing mixture into a small squeeze bottle sold in pastry shops. Alternatively, place the icing in a zip top bag and snip a small hole at one end to create an instant pastry bag.

14) When the buns are cool, squeeze the icing on in a zig zag fashion.