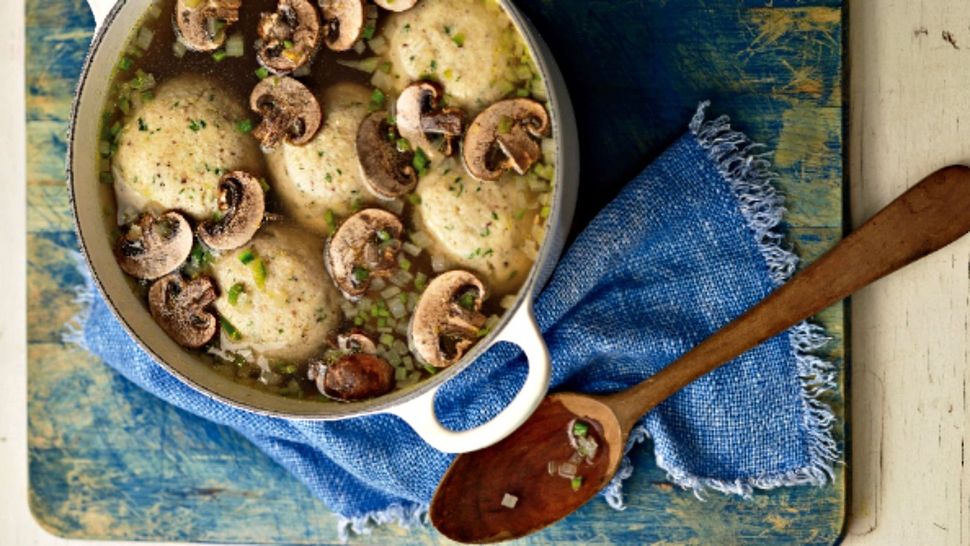 For five seasons, Pati Jinich has cooked her heart out on Pati’s Mexican Table, a PBS series in which this Mexican-Jewish chef, cooking teacher, food writer and mom devotes each episode to the evolution of Mexican food and Mexico’s rich history and culture.

This month, with the release of her newest book, “Mexican Today: New and Rediscovered Recipes for Contemporary Kitchens,” Jinich, a former policy analyst focused on Latin American politics and history, is all about sharing her heritage — and her twists on beloved Jewish foods.

Talk to Jinich about Passover and she animatedly describes a family favorite: matzo ball soup with jalapeños. Adding a little heat to this traditional starter may give your mother-in-law a shock, but for Jinich it’s all about connecting to her Mexican and European roots: Both sets of her grandparents escaped from Europe, were turned away from the United States and ended up in Mexico, where her parents and she were born.

Toasted sesame oil gives Jinich’s matzo balls a little bit of a nutty taste and, in a nod to her maternal grandmother, she seasons them with nutmeg and a little parsley. She simmers her chicken broth over a bed of cooked onions, garlic, cremini mushrooms and cooked jalapeños, a welcome change from a traditional — dare we say it — bland broth.

Most of Jinich’s Passover recipes are riffs on traditional Ashkenazi ones, infused with Mexican flavors.

“I take a lot of liberties,” said Jinich, who moved to Dallas in 1996 after she got married. She now lives in Washington, D.C., with her husband and three sons. “I enhance my charoset with jicama or hibiscus flowers, both ingredients that are adored in Mexico.”

Gefilte fish Veracruz is rooted in Jinich’s Polish grandmother’s recipe and inspired by the city her grandparents arrived in when they reached Mexico’s shores.

“For any immigrant, the main gateway to Mexico was the port city of Veracruz in the Gulf of Mexico,” Jinich said. “The Mexican way, a la Veracruzana, means your gefilte fish is accompanied by a spicy tomato sauce dressed with pickled chilies, olives and capers — that’s how we cook fish.”

When Jinich prepares her Seder meal, the joy comes from connecting to the generations before her and to her family, some of whom still live in Mexico.

“When I eat my traditional Mexican-Jewish foods at my Seder table, I’m eating exactly the same thing my family is eating in Mexico,” she said. “That gives me and my kids an incredible sense of connection.”

This is a Mexican rendition of matzo ball soup, with jalapeños sweated along with mushrooms, adding subtle heat to the broth. The mush¬room base is easy to make. It’s a wonderful way to dress up chicken soup for the holidays or for entertaining. My maternal grandmother used to season her matzo balls with nutmeg and a bit of parsley. I add a splash of toasted sesame oil too. Her secret ingredient for making them fluffy was a dash of sparkling water.

1) In a large bowl, combine the matzo ball mix, parsley, nutmeg and ¾ teaspoon salt. In another small bowl, lightly beat the eggs with 6 ta¬blespoons of the canola oil and the sesame oil. Fold the beaten eggs into the matzo ball mixture with a rubber spatula. Add the sparkling water and mix until well combined. Cover and refrigerate for at least 30 minutes.

2) Heat the remaining 2 tablespoons oil in a large pot over medium heat. Add the onion, garlic and chiles and cook, stirring, for 4 to 5 minutes, until they have softened a bit. Stir in the mushrooms and ¾ teaspoon salt, cover and steam the mushrooms for 6 to 8 minutes. Remove the lid and cook uncovered until the liquid in the pot evaporates. Add the chick¬en broth and bring to a simmer. Taste and adjust the seasonings.

3) Meanwhile, when ready to cook the matzo balls, bring about 3 quarts salted water to a rolling boil in a large pot over high heat. Reduce the heat to medium and keep at a steady simmer. With wet hands, shape the matzo ball mix into 1- to 1½-inch balls and gently drop them into the water. Reduce the heat to low, cover and simmer for 25 to 30 minutes, until the matzo balls are completely cooked and have puffed up. Remove with a slotted spoon and transfer to the soup. Serve.