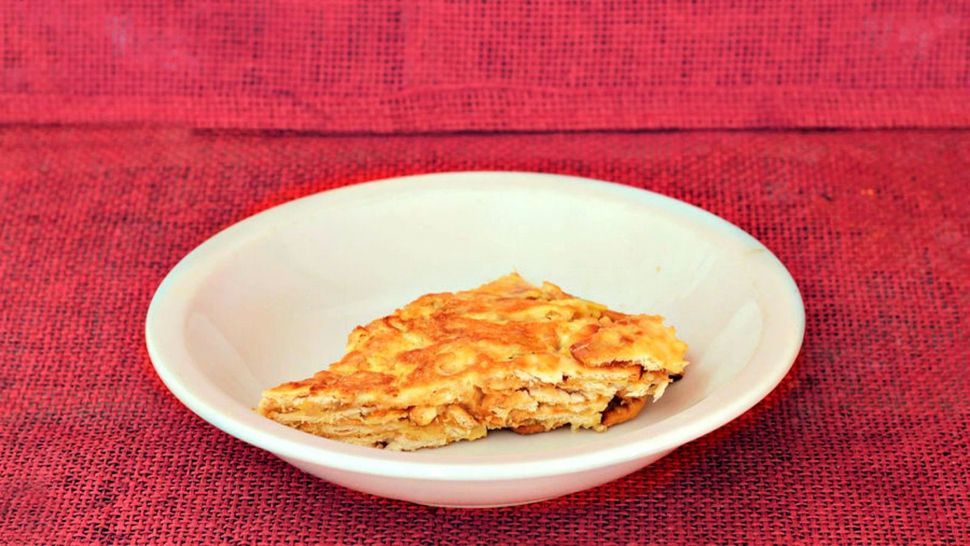 Growing up, I missed out on matzo brei. The more-than-the-sum-of-its-parts dish of crumbled matzo mixed with beaten egg and pan fried in copious amounts of butter (or oil, though it is vastly inferior this way) is a true Passover breakfast icon — just not in my family’s home.

Perhaps my mother, our household’s primary cook, didn’t care for it; or maybe all that butter and egg set off her health-conscious alarm bells. Whatever the reason, I don’t remember eating matzo brei until adulthood. But once I did, there was no turning back.

On a holiday where breakfast options are severely curtailed (pancakes, waffles, oatmeal, cereal, toast, muffins and anything else worth eating are all off limits), matzo brei has become Passover’s reigning early-morning champion. It’s as simple to make as scrambled eggs and as satisfying to eat as French toast. Over the past century, it has graced countless Passover tables and become a year-round menu item at delicatessens.

According to Gil Marks’ “Encyclopedia of Jewish Food,” matzo brei is native to America. Recipes for the dish show up in the first Jewish American cookbooks, including the 1889 edition of “” and the 1901 first edition of “The Settlement Cook Book.” The earliest recipes instruct readers to dip the matzo in egg before frying. But before long, home cooks began crumbling the matzo and mixing it directly with the eggs to soften it, ending up with richer and more tender results.

When it comes to toppings there are two general matzo brei camps: sweet and savory. Adherents to the sweet approach insist on topping matzo brei with a snowy dusting of sugar or a drizzle of honey, while Team Savory typically sticks with a little salt or sour cream.

Delicious in either iteration, matzo brei opens itself up to infinite interpretations. I like to think of it as a blank canvas (albeit a well-buttered one!) onto which I can layer flavor. Berries, banana and chocolate are all fair game, as are cheddar, salsa and smoked salmon. Personally, the thought of a poached egg perched atop a plate of matzo brei brings joyful tears to my eyes. Whatever your persuasion, check out the matzo brei recipe and riffs below, and breakfast well all Passover long.

1) Spread the matzo in an even layer in a large baking dish. Add the water and gently stir until the matzo is moistened. Let stand until matzo softens, 1 to 2 minutes, then pour out any excess water.

2) Whisk together the eggs and salt in a medium bowl. Pour the egg mixture over the softened matzo and stir to combine.

3) Melt the butter in a large nonstick frying pan set over medium heat until foaming. Add the matzo and egg mixture and, using a spatula, press it into an even layer. Let cook, undisturbed, until the bottom is golden brown and the mixture sets, 5 to 7 minutes. Flip the matzo brei and continue cooking until the second side is golden brown, 4-5 minutes more. Transfer the matzo brei to a serving platter or divide among plates and serve immediately.

1) Blueberries and Orange Zest Compote
Stir together a few handfuls of blueberries, a few tablespoons of sugar, a couple strips of fresh orange zest, a squeeze of orange juice and just a little water in a saucepan set over medium heat. Cook, stirring occasionally, until blueberries begin to burst. Let cool a bit before spooning over matzo brei.

2) Caramelized Banana
Melt a tablespoon or two of butter in a pan set over medium heat. Add 3 sliced bananas, a couple tablespoons of brown sugar and a tiny pinch of salt. Cook, stirring occasionally, until bananas are tender and golden.

3) Apple & Cinnamon-Sugar
Peel and finely chop an apple and stir it into egg and matzo mixture before frying. Mix together a couple tablespoons of sugar with a couple teaspoons cinnamon. Sprinkle generously over finished matzo brei.

4) Chocolate and Almond
Stir together a few heaping tablespoons of almond butter with a couple of teaspoons of cocoa powder and a couple tablespoons maple syrup. Spread on matzo brei.

5) Ricotta Strawberry
Mix a few heaping tablespoons of ricotta with a little honey or sugar and some finely grated lemon zest. Dollop onto matzo brei and top with sliced strawberries and another sprinkling of sugar.

6) Lox and Onion
Chop or thinly slice 1–2 onions. Heat a couple tablespoons of vegetable oil in a frying pan set over medium heat. Add onions and a generous pinch of salt and cook, stirring occasionally, until softened and golden brown. Remove from heat and stir in chopped lox. Spoon mixture over matzo brei and sprinkle top with snipped chives.

7) Poached Egg and Parmesan
Poach an egg in simmering water. Top matzo brei with the egg, a shower of parmesan cheese and snipped chives or parsley.

8) Fried Egg and Salsa
Mix together diced tomatoes, chopped cilantro, a little chopped white onion, a chopped jalapeño and a couple of squeezes of fresh lime juice in a bowl. Fry an egg and arrange it on top of the matzo brei. Top it off with a couple of tablespoons of salsa.

10) Avocado and Cheddar
Top warm matzo brei with a sprinkle of grated cheddar and a few slices of avocado. If desired, drizzle on a little hot sauce.