The Secret to Perfect Falafel 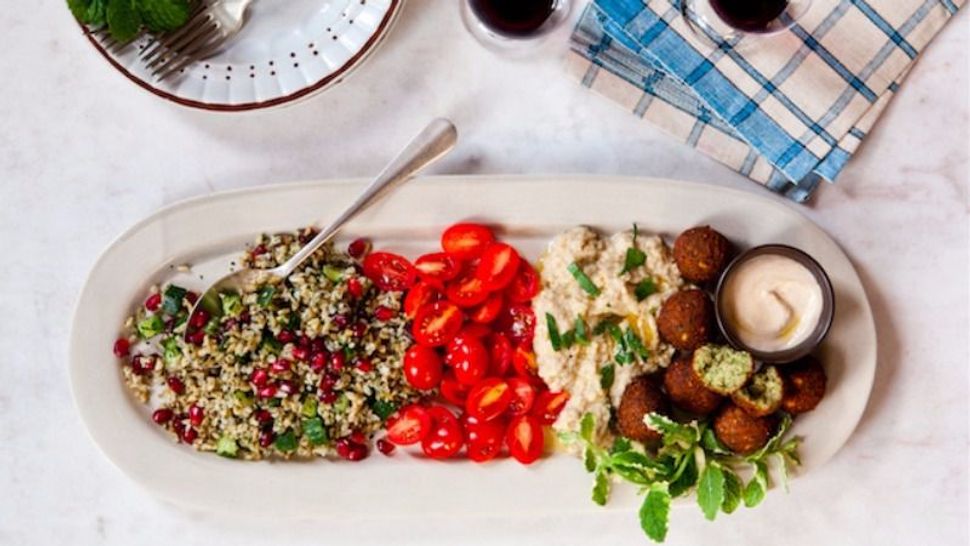 My friend Nancy Silverton went to Israel last year and came home with a rough, scribbled- down secret “recipe” for how to make what she promised were falafel so crispy, crunchy, and flavorful that they turned her, a falafel skeptic, into a believer. The first time I looked at it, I thought there was something wrong or missing from the recipe. If I’d been locked in a room until I could figure out what falafel was made of, I would have died an old woman before I would have guessed that those light and crunchy balls of savory, goodness were made from ground, uncooked chickpeas. Yes, the chickpeas are soaked, but they’re still hard as rocks, and it’s still amazing. Sparkling mineral water is supposedly the key to making these as crispy as they, in fact, turned out to be. The chickpeas must soak overnight, so plan ahead because this here is the one place in life where you can’t substitute canned chickpeas.

G-Free Alternative: To make this g-free, sub quinoa for the freekeh in the tabbouleh. It won’t be as flavorful, but good health, like happiness, so often comes at the hands of compromise.

1) To prepare the falafel, combine the chickpeas, onion, garlic, parsley, cilantro, salt, cumin, coriander, pepper and cardamom (if you’re using it) in a food processor and pulse until the chickpeas are finely ground. Turn the mixture out into a bowl and stir in the mineral water and baking soda. Cover the bowl and refrigerate for 1 hour to soften the ground chickpeas.

2) Pour 3 to 4 inches of canola oil into a small saucepan. Fasten a candy or deep-fry thermometer to the side of the saucepan or drop in an unpopped kernel of popcorn into the oil. Heat the oil over medium-high heat until the thermometer registers 350° F or the kernel pops. Remove the popcorn kernel if you used it. (I learned this trick from the venerable cooking magazine Cooks Illustrated, a great magazine if you want to learn to be a better or more knowledgeable cook.)

3) While the oil is heating, give the falafel mixture a good stir and scoop it into 1-ounce (2-tablespoon) portions; roll into balls, and put the balls on a baking sheet or plate. The mixture is very wet and can be awkward to work with; the moisture is what makes the falafels as light as they are. Carefully drop the balls in the oil, adding only as many as will t in a single layer, and fry them for 1 to 2 minutes, until they are golden brown and crispy, turning them as they cook so they brown evenly. Using a slotted spoon or strainer, transfer the falafel to paper towels to drain, and sprinkle with salt. Fry the rest of the falafel.

Fresh pomegranates make a short appearance in stores during the fall and winter. They’re so pretty that I buy enough to ll my favorite bowl so they can just sit and please me with their rustic, ruby-red beauty until I’m ready to eat them. When pomegranates aren’t in season, use small cherry or grape tomatoes in their place.

Put the freekeh in a big, wide bowl. Add the rest of the ingredients and toss everything up.

The best way I know to remove pomegranate seeds from the fruit is one I learned only recently from the farmer and agriculture guru Tom Chino. Here’s how he taught me to do it: Cut the skin of the fruit in half, then twist the pomegranate to break it in two.

With the open side facing a bowl, spank the skin side of one pomegranate half with the biggest and heaviest wooden spoon you have; the seeds will pop right out of the fruit and into the bowl. Do this to the other half. If there are any stubborn seeds remaining in the shell that you’re dying to salvage, put on a pair of kitchen gloves and dig them out with your fingers. (Some trick that is, right?) Pick out and discard any pulpy bits that might have ended up in the bowl with your seeds and move on with your recipe.

The Secret to Perfect Falafel