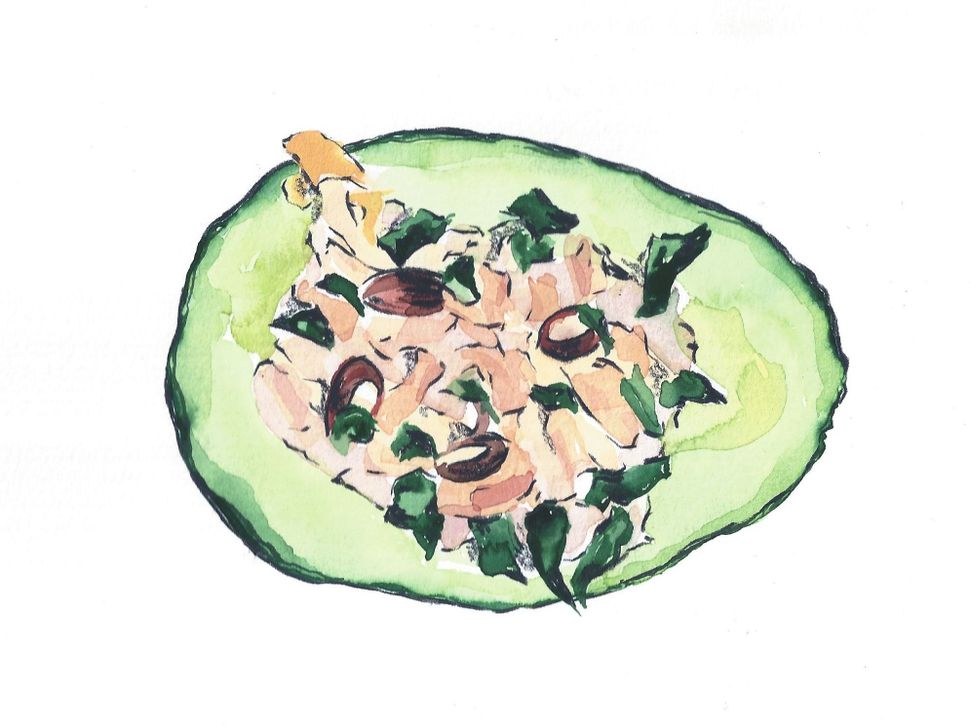 Image by Courtesy of Scribner

What is an alligator pear? Something familiar by a foreign name.

It lived an abused if tolerable life, until one bright morning under the Nixon administration when it awoke to learn it would no longer be harassed with salads of chicken or lobster or anything. It would be left to stand on its own. It would one day be called . . . avocado.

I am happy for the dignifying. But it remains as true now as it ever was that if a ripe avocado is filled with a culinary echo of the bridal refrain of something old, something new . . . of something rich, something acid, something salty, something crisp, it is a small, correct opulence.

1⁄4 teaspoon kosher salt, plus to taste

1 (4-ounce) can olive oil–packed tuna, with its oil

Halve the avocado lengthwise. Remove the pit and scoop out a very small amount of the flesh from the center of each half, leaving most of it attached to the avocado skin and reserving whatever you scoop out.

Lightly salt the inside of the avocado. Soak the onion in the lemon juice with the 1⁄4 teaspoon salt for 10 to 15 minutes. Add the avocado you’ve scooped, the tuna, almonds, parsley, olive oil, lots of black pepper, and more salt to taste. Mix it lightly to combine, leaving large chunks of the tuna and avocado. Fill the avocado halves with the mixture, mounding it up slightly. Save any extra for a sandwich.

This seemly dish is a small meal on its own (especially if you eat both halves, as I sometimes do). It is also a wonderful preamble to a second salad—a new practice that would have once been scorned— of freshly boiled tiny green beans and tomatoes with buttermilk or Green Goddess dressing, or Waldorf salad in pieces, or any unnamed combination of good vegetables, cooked or resolutely not, but only seasoned with salt and vinaigrette, as you like.

Excerpted from Something Old, Something New by Tamar Adler.