Use Your Etrog After Sukkot For This Fragrant Eggplant Dish 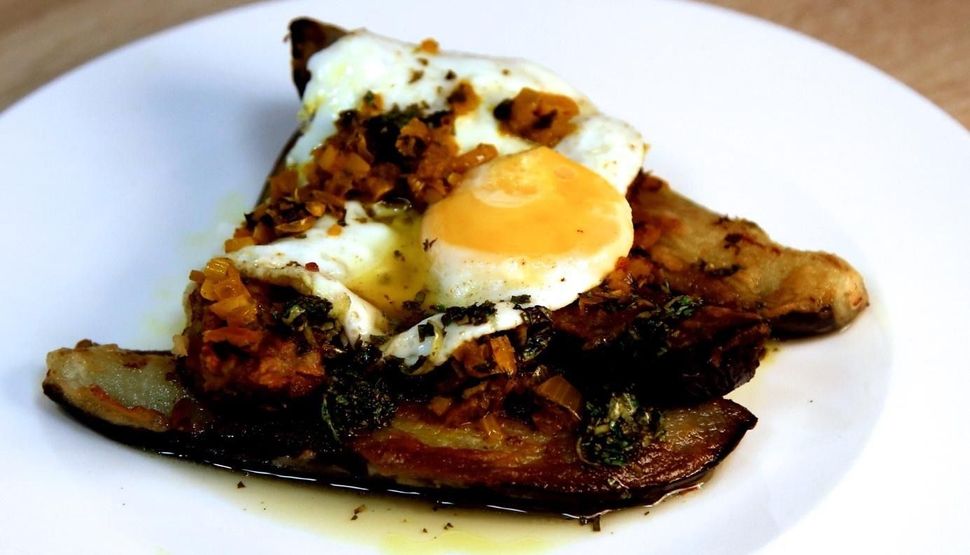 I was sifting through the Kitāb al-ṭabīẖ, the oldest cookbook of the Iberian Peninsula, looking for highlights of Spanish-Jewish culinary heritage in the 13th-century Arabic recipes, when I realized that I had stumbled on a very unique one, prepared with an etrog: “Eggplant dish with saffron.”

You might ask, “Why could it be special for a recipe of the 13th century?”, and I would answer that, over the 462 dishes of the cookbook (including six explicitly Jewish recipes), the “Eggplant dish with saffron” is the only one to contain etrog (utruǧ in Arabic), the large yellow citrus fruit that is one of four species used to celebrate the Jewish holiday of Sukkot.

Also called the “lemon tree of the Jews”, the cedrate/citron tree is used occasionally in the cookbook for its leaves, but never for its fruit — except for this recipe.

Here’s my interpretation of the medieval recipe, “A yellow eggplant dish with citron,” which is almost the same recipe as the one mentioned in the cookbook. As the etrog is hard to find, you can use a big organic lemon instead. This recipe needs a huge quantity of vegetables, starting with an organic eggplant.

A yellow eggplant dish with citron for Sukkot

Cut the eggplants in half and salt them.

Leave to disgorge for 30 minutes.

Bring salted water to the boil and immerse the eggplant in it for 8 minutes. Remove them delicately from the water without damaging them and passing them under cold water. Set aside.

Make zests of 1/2 lemon and recover its juice, then chop very thin 10 fresh mint leaves. Mix both preparations and add 2 tsp of honey. Set aside.

Meanwhile, put neutral oil to heat in a fry pan, about a width of a finger.

Take the two half eggplants and cut them in half again. Press them a little to keep the water flowing.

Flour them without excess and put them to fry, 3 minutes on each side, starting with the skin side. Keep warm.

Then fry two eggs. They must not break.

Warm up the vegetable sauce slowly.

Just before serving, put the pieces of fried eggplant on the plate, pour ¾ vegetable sauce on the eggplant, put the fried eggs on top, cover with the ¼ sauce left over the eggs and add the mint-lemon-honey mixture.

Use Your Etrog After Sukkot For This Fragrant Eggplant Dish