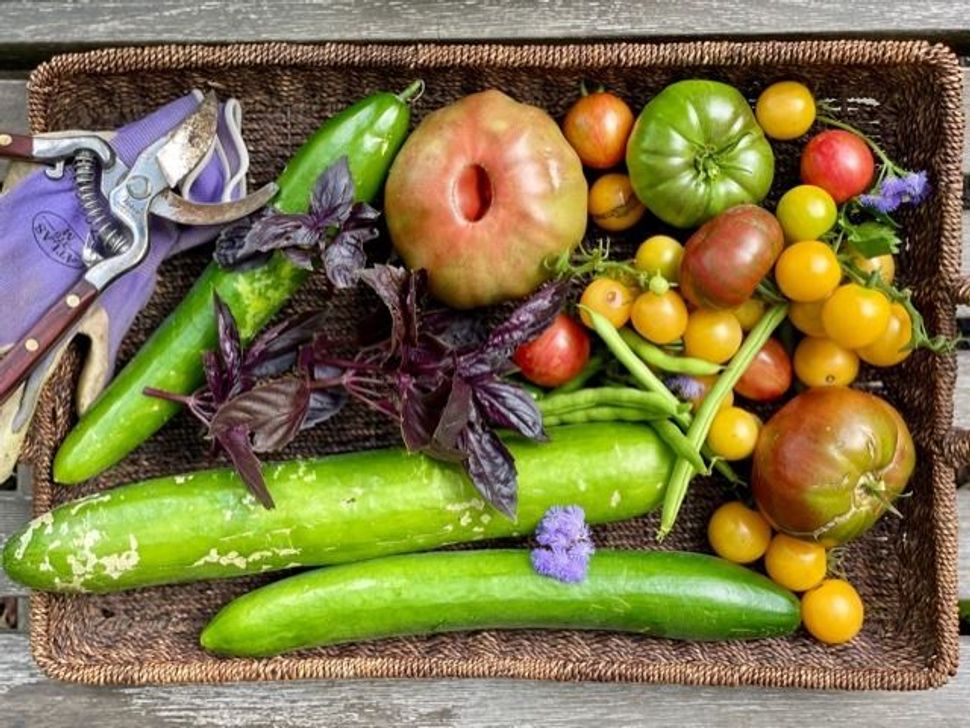 As one does this time of year, I’m looking back and thinking about how I spent my time. What might I have done differently or better? More tzedakah and less Netflix jumps immediately to mind. But I’m also looking at what I’ve accomplished. And second only to launching my younger child into a life of higher education, the thing I’m most proud of is the garden I began from seed last spring and nurtured into a thriving, mature organism.

Not unlike the kid, come to think of it.

When the garden was finally ready for planting at the end of May, the first things I put in were the tomato seedlings. I’d started those babies from seed when the weather was cold, fussing over them like the Jewish mother hen that I am.

Were they warm enough? I bought a heating pad to place underneath them. Were they getting enough light? I put them on an east-facing window seat, then ordered a grow-lamp. Were they getting enough water, and was their environment sufficiently—but not overly—humid? I kept adjusting the little vents in the clear plastic dome that covered them. Were they starting to look “leggy,” whatever that was, because apparently that was bad. I read books and almanacs, web pages and seed packets. I doubt I consulted “What to Expect When You’re Expecting” as much when I was pregnant with my first child.

It was over the rainy Memorial Day weekend that we finally put the seedlings into the ground. I handed one fragile plant to each of my kids and let them do the honors, wanting them to feel as invested in this new garden as I was. They sunk their spindly little seedlings deep down into the earth, then went inside to play video games without a backward glance.

I planted most of my seedlings on that soggy afternoon: a few more tomatoes, several hot and sweet peppers, a couple of cucumbers, some kale and broccoli… But over the course of the summer it was the tomatoes that would monopolize more of my time and energy than any of the other crops. 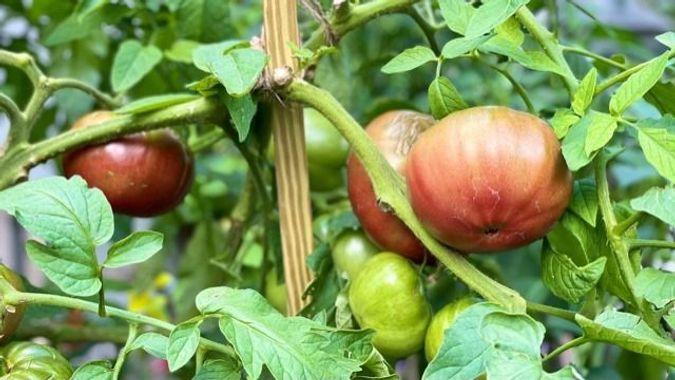 Tomatoes on the vine. By Liza Schoenfein

Tomatoes need tending, in that the vines grow tall and rangy, then heavy with fruit, and have to be secured with stakes or other systems or they fall over and snap their stalks. The cucumbers, carrots, and kale seemed to take care of themselves; it was the tomatoes that I fretted over during the hurricanes.

And finally, last week, the hard green globes hanging from the vines began to burst into a rainbow of color: yellow and orange, red and purple. The sense of accomplishment is acute, and they taste better than any store-bought tomato I’ve ever had.

Tomatoes have an auspicious Jewish history. They were originally brought to Europe from Mexico by the Columbian Exchange in the 16th century, through the port of Naples. But because the fruit was a member of the nightshade family it was thought to be poisonous and was therefore avoided.

“However, Roman Jews knew better,” Joan Nathan writes in “King Solomon’s Table.” “Many Jewish physicians knew of tomatoes’ and eggplants’ healthy properties and spread the word within the community about them. And Jews, too, were often the merchants selling this new produce around the ports of Europe.”

And according to culinary historian Gil Marks, it was a physician named John de Sequeyra, of Portuguese-Jewish descent, who encouraged Americans to eat tomatoes. “None other than Thomas Jefferson acknowledged Sequeyra as the person who introduced and encouraged people in Virginia not to fear but to cultivate and eat the tomato,” Marks writes in his “Encyclopedia of Jewish Food.” 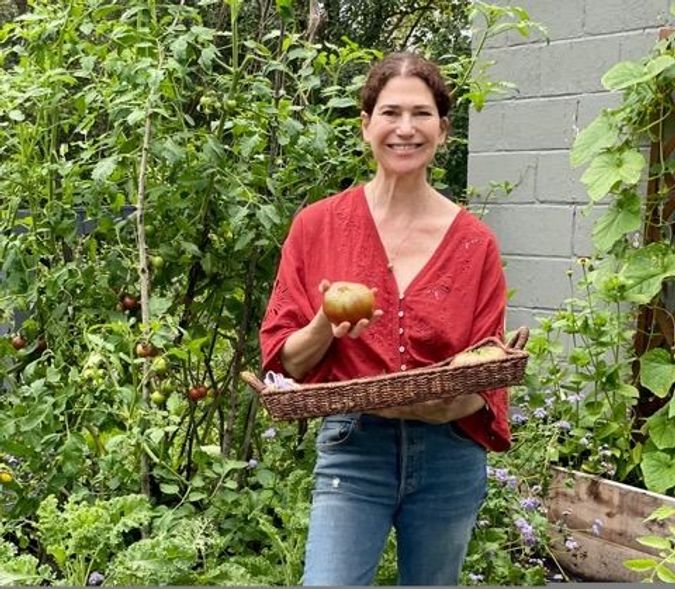 The author with tomatoes from her garden. By Lisa Grenning

So what to do with the literal fruits of my labor? With the High Holidays in mind (and having already developed a carrot recipe for Rosh Hashanah) I decided to come up with a recipe for the Yom Kippur Break Fast; something that would highlight all the delicious properties of the tomatoes: its sweetness and acidity; its freshness and versatility; its umami qualities and fruitiness.

The first thing that came to mind was tomato jam, something to serve alongside a bagel spread, enhance a soup, or rev up a roast. Meanwhile, I had olive oil cake on the brain, and realized that the natural pairing of tomato and olive oil, perhaps with some fresh thyme and a little white wine, would be sublime. I wondered if the jam could act almost as a caramel, and if, combined with fresh tomato slices, it could become the colorful, glistening top of a kind of tomato-olive-oil upside-down cake.

The answer is yes, it could. The recipe took some trial and error—the first version I came up with was too sweet, and the tomato flavor got lost amid so much sugar and a few superfluous ingredients. I reduced the sweetness and swapped a few things out, ultimately creating something that’s stunning but fairly simple. Unusual as it seems, it tastes kind of classic. The cake can be eaten as part of a savory spread, with a couple of cheeses and salad, or saved for the end of the meal.

As the year winds down, it’s edifying indeed to see my tomatoes making their way in the world. 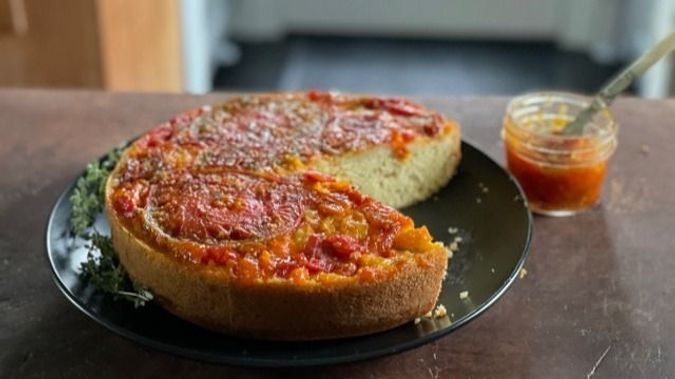 This recipe is a two-parter. You begin by making a simple tomato jam, some of which is used in the cake. Serve what’s left on the side, and on your next cheese board. Make sure to keep it in the refrigerator and use it within a few weeks unless you go through a proper canning process. 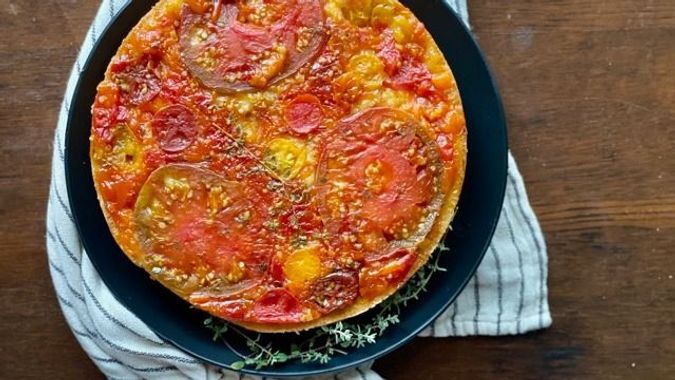 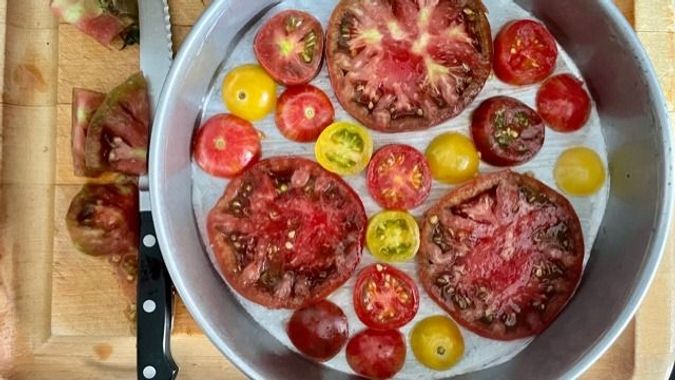 Sliced tomatoes laid on the bottom of the cake pan. By Liza Schoenfein

Liza Schoenfein is a former food editor of the Forward and the author of the blog Life, Death & Dinner. Follow her on Instagram, @LifeDeathDinner.