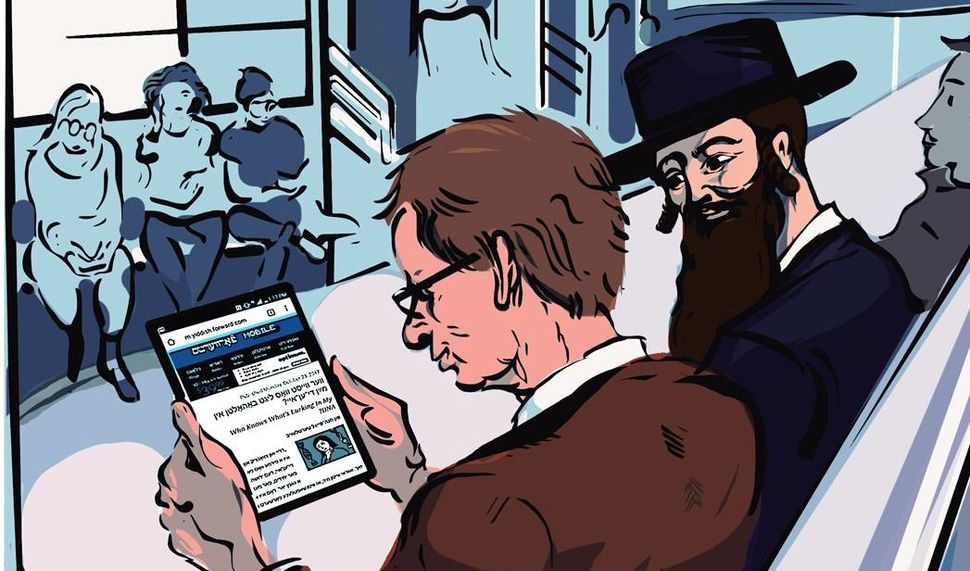 As editor of the Forverts, most of the questions I get from readers involve either the price of an obituary or a request to decipher a handwritten postcard written by a deceased relative.

Recently, though, I got an email with a very different sort of question:

“I’d be curious to hear your vision of the Forverts, especially these days when Yiddish is spoken almost exclusively by Hasidic, Torah-true Jews who for the most part are not on your side anyway. Every publication has an agenda. What motivates your publication? What’s your goal?

Kave Shtiebel is a Hasidic Facebook page, leading me to conclude that Gevaldig was himself a Hasid.

His question is a fair one. Most people who can read Yiddish today are, or have been, members of the Hasidic community. If my goal were to write for the majority of Yiddish speakers, we would be printing articles that are predominantly of interest to the Hasidic population.

But although we do have a Hasidic blog, “Idish With an Alef”, and regular blogposts from the irrepressible Satmar-raised Riki Rose, our main goal is to draw in Yiddish enthusiasts of all affiliations and backgrounds.

Luckily, these are good times for mame-loshn. Ann Toback, executive director of the Workmen’s Circle in NYC, recently announced that her organization’s Yiddish courses have drawn no less than 270 students this year.

This renewed interest in Yiddish isn’t just an American phenomenon. At the World Congress of Jewish Studies held in Jerusalem last summer, a number of lectures focused on Yiddish language and literature; six speakers even gave their lectures in Yiddish.

To meet this growing need, our goal is to provide visitors to our website with Yiddish articles and videos that are informative or inspiring, or that simply make them smile. How many people would have known, for instance, about the Swedish all-day conference on the great poet, Avrom Sutzkever, had we not written about it? (Yes, Yiddish is a “thing” in Sweden!) How many would have known that the Israeli government recently ended its funding for the longtime Yiddish radio station? Or that the popular female klezmer drummer, Elaine Hoffman Watts, had passed away?

Because many of our website visitors don’t live near other Yiddish enthusiasts – an unfortunate reality that might cause them to feel isolated – our intention (or “agenda”, as Gevaldik calls it) is to share stories of those individuals and organizations who are working hard to “spread the Yiddish word”.

Not everything we write is about Yiddish per se. We also publish original features like the one about a Simchas Torah ball that took place in a DP camp in 1949. Stories about pre-Holocaust Eastern Europe and the Lower East Side also resonate strongly with our readers.

And for those who prefer video (especially those who don’t know Yiddish), we regularly post subtitled Yiddish videos like our cooking show, “Eat in Good Health!”, our popular series, “Treasures of the Forverts Archive” and clips of new Hasidic pop songs.

In fact, people who don’t know Yiddish can also subscribe to a bi-weekly newsletter of Forverts articles translated into English.

You may have noticed that I haven’t mentioned a word about the usual role of a newspaper: reporting on, and analyzing US and world events. Although our weekly radio report from Jerusalem does include news about the Israeli government and its relations with its Arab neighbors, covering the political scene is no longer part of the Forverts mission.

The reason? Due to the highly charged political climate today, both in the US and in Israel, Jews are more divided than ever. As a Yiddish cultural newspaper, I feel that we can accomplish much more by sharing news that brings Jews of different opinions and backgrounds together instead of tearing them apart. Our “agenda” is for those who love the Yiddish language, its music, films and Old World recipes to see us as an oasis in a harsh, brittle world.

Apparently, our visitors agree. On November 9, 2016, a day after Donald Trump was elected President, many people were deeply upset about the election results and we did, in fact, consider writing an analysis on the question: how could the press have been so wrong in its predictions?

But at the last minute, I decided not to. “Let everyone else write about it,” I thought. “We’ll post a video as a pick-me-up instead.”

We immediately posted one that Berlin-based klezmer musician Daniel Kahn had recorded in our studio two months before: his Yiddish translation of Leonard Cohen’s song “Hallelujah”. The video took off immediately and on the next day, when the unexpected news came out that Cohen had passed away, the video went viral. Since then the video has garnered over 627,000 hits.

Imagine that: a clip of a young man singing a new Yiddish song has transfixed more than half a million people – a clear sign to me that the Forverts is indeed headed in the right direction.