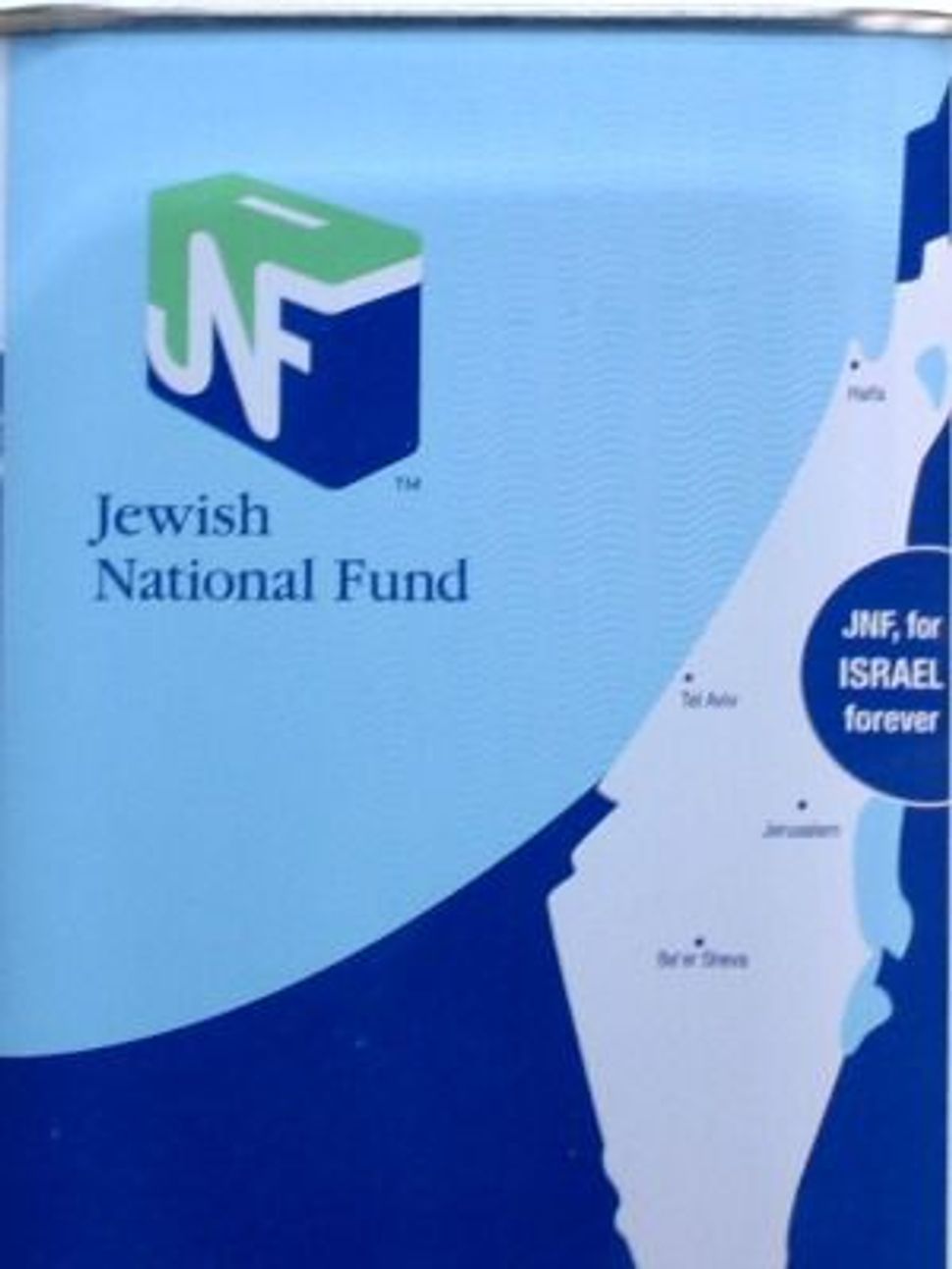 For over 100 years, the Jewish National Fund’s iconic little blue donation boxes presented on their tin sides a dream of a Jewish state that spanned, uninterrupted, from the Jordan Valley to the Mediterranean Sea.

The Israeli government officially dropped that dream in 2009, when Prime Minister Benjamin Netanyahu announced his support for a two-state solution to the Israeli-Palestinian conflict.

The little blue boxes didn’t get the memo.

Today, the JNF’s coin collection boxes, which sit on tables in Hebrew school classrooms throughout the Jewish Diaspora, are still decorated with a map that depicts Israel without the Green Line that, on most maps, distinguishes Israel from the Palestinian-populated West Bank, which it has occupied since wresting it from Jordan in the 1967 Six Day War. The lack of a Green Line was noted in a December 24 blog post on the anti-Zionist website Mondoweiss. 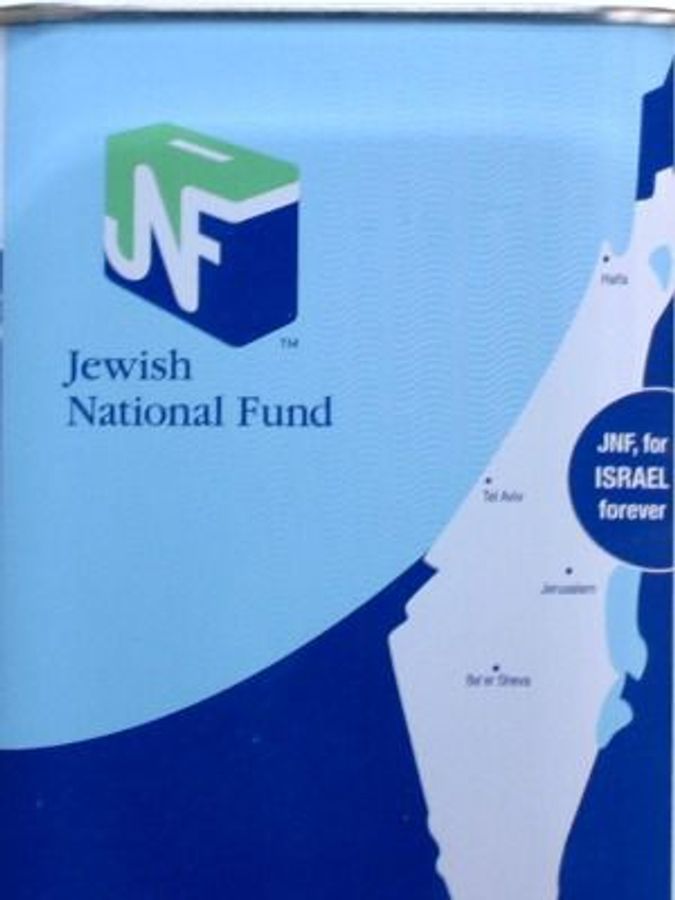 Asked about this, a spokeswoman for JNF denied in an interview with the Forward that the maps on the boxes are maps of Israel. “This doesn’t say this is a map of Israel,” said Neta Yoffe, JNF’s director of communications. “This is a blue box… Nowhere do we talk about it being a map of Israel. We just focus on the wonderful work that we do for the country.”

Yoffe said that the map was a representation of where the JNF’s projects were located. “It kind of shows the area we focus on,” Yoffe said. “Our projects are not in the United States. You’re not going to see a region in the U.S. You’re going to see where our projects are based.”

The JNF does work on both sides of the Green Line, according to Yoffe. Yoffe said that JNF projects in the West Bank were limited to areas of what the JNF calls “national consensus.” The JNF has planted a forest near the West Bank settlement of Maaleh Adumim in cooperation with the right-wing Zionist Organization of America.

Yoffe would not say whether the lack of a Green Line on the blue boxes signified opposition on the part of the JNF to a two-state solution. “I’m not going to get into a political discussion with you,” Yoffe said.

The JNF, a semi-governmental Israeli organization, owns 13% of all land in Israel within the Green Line. The vehicle by which the Jewish Agency purchased land for Jews to build a state before Israel was established in 1948, JNF touts its historic role in its mission statement, noting that “the organization has planted over 210 million trees, built over 100 dams and reservoirs, developed over 250,000 acres of land, and created more than 400 parks throughout Israel enhancing the quality of life for all of Israel’s citizens.”

But the group, which raises $50 million annually through its U.S. fundraising arm, has been at the center of several controversies in recent years. It has drawn attention for its efforts to force Bedouin villages off JNF-owned land, which have resulted in the repeated bulldozing of Bedouin towns. JNF has also drawn criticism for its continued refusal to sell or lease its land to non-Jews, including Arab citizens of Israel.

The blue boxes, however, remain iconic. The group has redesigned the box periodically since it was first manufactured in the early 1900s. The current version depicts a socialist-realist-style square-jawed worker with a shovel and a stark blue-and-white map. The map is partially obscured in the only image of it available online. A full view of the map provided by Yoffe showed that the borders it depicts leave out Gaza but envelop the West Bank.

The JNF’s blue boxes have long been used as a propaganda tool. In a 2003 article in the academic journal “Israel Studies,” Haifa University professor Yoram Bar-Gal reported that the first blue boxes to include maps in their design, produced in 1934, depicted a borderless area that reached from the Mediterranean into Lebanon and Jordan.

Bar-Gal wrote that the map’s expansive claim was presented on the box in order to “transmit a political message, to which not only adults were exposed, but also the millions of children in the Hebrew educational system, who contributed their coins at special fundraising ceremonies.”

The ongoing blue box programming continues to be directed primarily at children. On its website, the JNF offers school visits by Blue Box Bob, a character shaped like a blue box. Like the current design of the blue box, the map on the front of “Bob” depicts Israel and the West Bank as a single entity without a Green Line.

While the JNF is best known for its much-publicized activities such as planting trees, the group has received more attention in recent years for displacing Palestinians inside Israel. In 2011, JNF board member Seth Morrison announced that he was quitting the group after learning that a subsidiary of the JNF’s Israeli organization was evicting Palestinians from homes in East Jerusalem and handing them over to a settler organization.

Meanwhile, in the Negev, the Israeli government has demolished the Bedouin village of Al-Arakib dozens of times in an effort to clear JNF-owned land for a JNF forestation project. This effort, part of the JNF’s Blueprint Negev initiative, has drawn criticism from U.S. activists. In a statement, the rabbinical human rights group T’ruah condemned JNF.

“As a quasi-governmental body responsible for the development and management of Israel’s forests… KKL-JNF’s activities violate basic human rights and contravene Jewish values by refusing to lease or sell land to non-Jews and by contributing to the forced displacement of Bedouin communities,” T’ruah said.

In a January 2013 video posted by the JNF, CEO Russell Robinson defended the group’s actions in Al-Arakib. “It’s illegal for us to bulldoze any property. It’s illegal for the Jewish National Fund to kick anybody off a piece of land. We don’t have those rights,” Robinson stated. He said that one Al-Arakib family that had challenged JNF in court had lost their legal suits and that JNF had, in any event, planted no trees there. “We plant trees in lands that do not have legal obligations to them,” he said.

The JNF continues to lease land only to Jews, though decisions by Israeli courts have forced a complex deal in which the JNF has traded their urban holdings to the Israeli government in return for undeveloped land. According to a December Haaretz report, Arab buyers are still having trouble purchasing the transferred property.