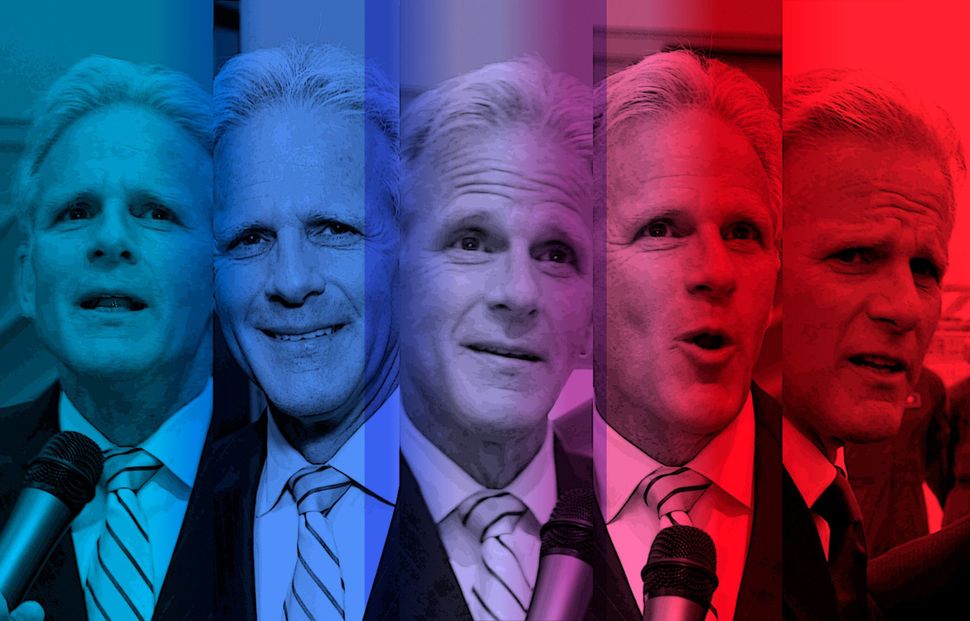 “I used to think I knew Michael Oren. This is no one I know, or wish to know.”

This January 24 tweet by Tamara Cofman Wittes, a Middle East scholar from the Brookings Institution and a former Obama administration official, may have summed up what many in Washington feel now about the former Israeli ambassador to the United States.

In his four years as ambassador and during his previous successful career as a historian and author, Michael Oren made many friends and developed quite a following in his native United States. The New Jersey-born Oren was seen by many as a bridge between Israel and the diaspora and between Israel’s right-wing leadership and America’s liberal Jewish community.

But a political shift to the right, a pronounced and vocal anti-Obama obsession, and recent comments and actions illuminating his negative views towards Palestinians all marked an evolution that Oren’s followers are having a hard time accepting.

“The Michael Oren I knew when he was in Washington could play a valuable role in reversing the increasing alienation of American Jews from Israel, especially amongst the younger generation,” said Susie Gelman, past president of the Jewish Federation of Greater Washington and now chair of the board of the Israeli Policy Forum. “I fervently hope that he chooses to do so.”

Gelman recalled Oren’s “great job” of outreach to all communities when he served as ambassador, including his “late-night jam session at the ambassador’s residence with [Maryland] Gov. Martin O’Malley on guitar and Ambassador Oren playing the bodhran, an Irish drum.”

Oren’s transformation from a symbol of middle-of-the-road pragmatism to a feisty figure on Israel’s right wing can be traced back to his decision to leave behind the protected worlds of academic research and diplomatic etiquette in favor of the cauldron of emotions and hyperbole that is Israeli electoral politics. His friends also believe it stems from his scarring experience in Washington during the Obama years, where officials representing Prime Minister Benjamin Netanyahu were met with suspicion, and perhaps even hostility, by a liberal establishment enraged by the actions of the government in Jerusalem.

Oren recently attracted attention following an incident in which a Palestinian teenager, Ahed Tamimi, was arrested after being videotaped slapping an Israeli soldier. Oren took issue with the authenticity of the Tamimi family, revealing that he had launched an inquiry in a classified Knesset subcommittee to examine whether the Tamimis were a real family, or actors “chosen for their appearance,” which he described as light-skinned, blonde, and wearing American clothing. Oren described their exploits as “Pallywood,” and sarcastically referred to the Tamimi family as the “Brady Bunch.”

Oren, now a member of the centrist Kulanu party and a deputy minister in Netanyahu’s cabinet, admitted that the inquiry led to no conclusion, but nonetheless continued to question the Tamimi family’s stories. He claimed in a tweet that 12-year-old son Mohammad Tamimi was photographed one day with a cast on his right arm and the next day with a cast on his left arm. “Tell me if this is not paid for and staged?” he asked. In the Twitter-storm that ensued, critics noted that Oren was either referring to photos taken more than a year apart, or to a widespread manipulated photo which used a simple mirror-image effect to make it seem as if the family was lying about their son’s broken arm.

Oren’s focus on the Tamimis was not the only move made by the former diplomat that raised eyebrows in Washington. Since leaving his post in 2013, Oren has become a vocal critic of former president Barack Obama. In his 2015 book “Ally: My Journey Across the American-Israeli Divide,” and in subsequent interviews and editorials, Oren accused Obama of deliberately betraying Israel’s security by promoting the nuclear deal with Iran, and claimed that Obama’s outreach to the Muslim world as president stemmed from his sense of abandonment by his Muslim father and stepfather.

The book surprised many in Washington, since as ambassador, Oren was seen as trying to bridge the gaps between Obama and Netanyahu. “After the book was published, he became even more extreme,” said a former official who had working ties with Oren as ambassador. The official noted Oren’s widely-mocked 2016 Rosh Hashanah video greeting, in which Oren described Israel as the “antidote for neo-paganism,” before going on a lengthy sermon mixing religion and personal reflection.

“He has become the talk of the town,” said the former official. “So many people who knew him as ambassador are now puzzled.”

Growing up in a Conservative Jewish family in West Orange, New Jersey, Oren — then named Michael Bornstein — was drawn to Zionism at a young age. After graduate school at Columbia University, he emigrated to Israel. He changed his surname to Oren and enlisted in the army, serving as a paratrooper in the 1982 Lebanon War. He eventually joined a think tank, where he won a reputation for making the Israeli experience engaging for English-reading American audiences.

After ending his post in Washington, Oren returned to Israel and joined Kulanu, a new centrist political party that eventually joined Netanyahu’s right-wing coalition. As a member of Knesset, he focused on U.S.-Israel relations, before being appointed in 2016 deputy minister in the prime minister’s office with a portfolio focused on public diplomacy.

Oren, whose accounts of the Six-Day War and of the history of U.S.-Israel relations were a must-read for any foreign policy wonk, is now seen as a partisan figure in Democratic circles. He is no longer invited to the annual Saban Forum in Washington, where the most important figures in the U.S.-Israel relationship gather every year, and no longer attends liberal Jewish events.

Despite his current reputation, those who worked with Oren in the past remember him as anything but a partisan hack.

“He was an exemplary ambassador who represented Israel perfectly and was a bridge between the government of Israel and the Obama administration at a time when relations were very complicated,” said Dan Arbell, who served as Oren’s deputy at the Israeli embassy in Washington.

Yossi Klein Halevi, a close friend of Oren, told Haaretz that Oren had evolved and is “not predictable,” but explained that his undiplomatic comments and actions should be attributed to Oren’s experience as ambassador in Washington.

“Eight years of Obama was devastating to Michael,” Klein HaLevi said. “When he was there, he experienced relentless attempts to undermine the U.S.-Israel relationship from the highest levels.”

Aaron David Miller, an American former peace negotiator, said Oren’s shift is anything but dramatic. “Is the decision to go into politics in the right of center context an act of betrayal? I doubt it,” said Miller. He described Oren’s shift after entering electoral politics as a practical step, one that was “transactional more than transformational.”

An Israeli political consultant believes that the explanation for Oren’s political evolution may be hidden in plain sight.

“Oren knows that he won’t get far with [Kulanu leader Moshe] Kahlon,” said the consultant. “He needs to get noticed by Bibi and by the Likud if he wants to move up in the next elections.”