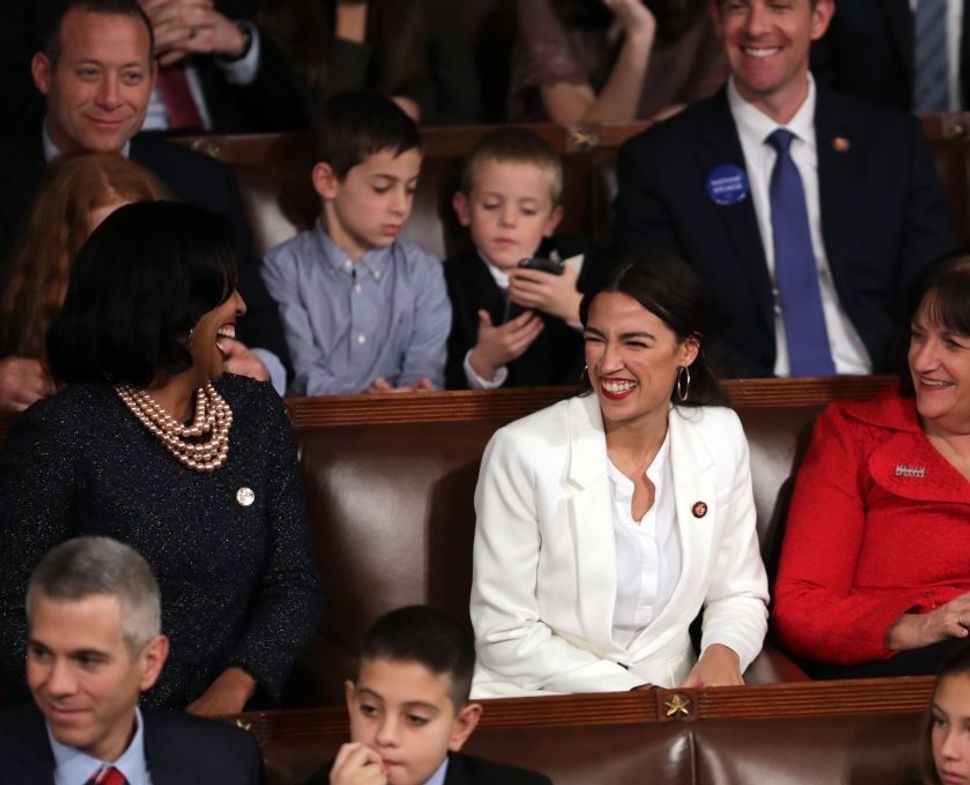 The new U.S. Congress held its first session on Thursday, ushering in a new generation of Democratic lawmakers and possibly signaling a new era in Israel-U.S. relations.

For the first time since entering the White House two years ago, U.S. President Donald Trump will have to deal with a new reality in which his political rivals will have real power in Washington, limiting his ability to promote his legislative and budgetary priorities. His Middle East policy, including on the Israeli-Palestinian conflict, is expected to be one of the issues on which the Democratic majority in the House of Representatives will challenge the president.

The new Congress will also present a fresh challenge to Israel after two years of complete Republican control. Under the leadership of Prime Minister Benjamin Netanyahu and his current right-wing governing coalition, Israel has grown close to Trump over the past two years.

Dan Shapiro, who was the U.S. ambassador to Israel under the Obama administration (and previously worked as a staffer in Congress), told Haaretz that “Israel dealt with a certain political situation in Washington since 2016, and now that situation is about to change. I hope Israel will succeed in dealing with this new reality.” He added that some Israeli politicians aren’t fully aware of the importance Congress has within the complicated American system of government.

Shapiro predicts that American security assistance to Israel won’t be affected by the new balance of power, since “this is an issue that enjoys a clear bipartisan consensus.” In fact, the only senator to recently take action against U.S. military aid to Israel has been Republican Rand Paul of Kentucky. The Democratic majority in the House, Shapiro said, will very likely continue to support Israel’s security needs.

Where a change in policy could take place, he added, was on the Israeli-Palestinian issue. The Trump administration made a string of controversial decisions in 2018 to almost completely cut U.S. aid to the Palestinians – including money that was supposed to support cancer treatments, coexistence programs between Israeli and Palestinian children, and humanitarian projects that don’t directly benefit the Palestinian Authority.

Shapiro believes Democrats will try to look for ways to “balance some of the damages” the Trump administration has caused in this arena. He specifically mentioned the danger to USAID’s activities in the West Bank and Gaza. “This is an issue where Congress could potentially still have an impact,” he said.

A Democratic source on Capitol Hill who is involved in the party’s foreign policy agenda told Haaretz this week that “veteran members of Congress, who are well informed on the Israeli-Palestinian issue, know that even some former senior Israeli security officials have expressed concern about some of Trump’s steps against the Palestinians. They will try to find ways to support some of the programs the administration has hurt.”

The Democrats could also use their oversight authorities to demand answers from the administration regarding its constantly delayed Middle East peace plan, and also on Israeli attempts to annex parts of the West Bank. Shapiro said it “wouldn’t surprise him” if Democrats try to get administration officials to address these issues on the record in public testimonies.

One instance where Democratic oversight and the prominence of certain Democratic lawmakers could work in favor of the Netanyahu government’s agenda is Syria. Democrats such as Rep. Eliot Engel of New York – who is slated to become chairman of the House Foreign Affairs Committee – could demand more clarity and information from the administration on its timeline for withdrawing U.S. forces from Syria, and on a broader Syrian policy, where Israel is trying to push back against Iran’s growing presence.

The Democratic staffer who spoke with Haaretz estimated that “overall, there will be issues on which the new Democratic majority will be critical of Israel, such as settlements and the peace process. But when it comes to Israel’s security, there will be substantial support for Israel.”

Alon Pinkas, Israel’s former consul general in New York, told Haaretz that “Democrats have a long history and solid record of supporting Israel, so there will be no immediate impact on U.S.-Israeli relations.” Pinkas was in Washington last month and met with a number of prominent Democratic legislators. In his analysis, “The Democratic electoral majority reflects changing demographics in the United States that Israel should be very attentive to.”

He expressed concern, however, that Netanyahu “sees President Trump as his extension, and himself as the Republican senator from Israel, so there is little that Israel, under his government, can do to restore bipartisanship.” Pinkas accused Netanyahu and “certain political elements” in the United States of “poisoning” bipartisanship with regards to Israel, in order to promote “short-term political gain.”

Shapiro said that while there is concern about Israel’s alignment with Trump, he believes whatever damages were caused to Israel’s standing among Democrats over the past two years can be reversed with a smart and respectful approach.

Shapiro said that while there are indeed “Democrats who feel abandoned or ignored” by Israel, the new Congress “gives Israel an opportunity to strengthen and emphasize bipartisanship.” His recommendation on how to do that: “Show respect to the Democrats, engage them seriously and openly, and show appreciation for their support even when there are disagreements over specific issues.”

Nancy Pelosi, who will become Speaker of the House, has known Netanyahu for decades, and met him during a visit she made to Israel last year. While she has continuously supported U.S. military assistance to Israel, she has also been critical of Israel’s settlements in the West Bank and has called on Israel to recommit to a two-state solution.

While the vast majority of Democrats support a two-state solution, there is also a small but growing group within the party that is now calling for a one-state solution, based on the notion that Israel’s settlement expansion in the West Bank has made it impossible to create a Palestinian state.

The Israeli left has mostly rejected this idea over the past decades as it would lead to the end of Israel’s existence as a Jewish state. For the same reason, the leading left-wing Jewish groups in the United States have also consistently rejected the “one state” option, and instead pushed for a negotiated two-state solution that would ensure Israel’s standing as a Jewish and democratic country.

In recent years, though, the mood has been shifting and, as noted by Pelosi, there is growing support for a one-state solution on the left. That includes at least one new member of Congress, Rep. Rashida Tlaib (Democrat of Michigan), who is of Palestinian descent and is officially supportive of the one-state option. Another new congresswoman, Rep. Alexandria Ocasio-Cortez (Democrat of New York), has expressed openness to the one-state idea but has not officially backed it.

There is a growing level of support among Americans for a one-state solution to the Israeli-Palestinian conflict, as long as such a solution ensures equal rights and full citizenship to Palestinians, a University of Maryland poll suggested last month.

“There is definitely a sense among people on the left that the two-state solution is currently a meaningless slogan,” said one pro-Israel activist, who asked not to be identified. “The lack of any progress in the peace process is causing people to lose any hope for a future peace deal. As a result, people are thinking of alternatives to the classic ‘two-states’ formula. We have a big challenge on our hands, because the one-state solution basically means Israel will no longer be a Jewish state.”

This is also a challenge for left-of-center Jewish groups – such as J Street, the Israel Policy Forum, and others – that support a two-state solution. These groups have long grown used to being criticized by the right for opposing settlement expansion and pushing for a two-state solution. These days, though, they are also being criticized from the left for precisely the same positions. J Street, specifically, announced last year year it was dropping its endorsement of Tlaib because of her support for a one-state solution.

Dylan Williams, J Street’s senior vice president for government affairs, told Haaretz his organization is concerned about support for a one-state solution on both the left and right. He noted that while Tlaib will be the only Democrat in Congress who openly supports the one-state solution, there are dozens of Republicans who have endorsed the Israeli right’s version of a one-state solution – which is basically annexation in the West Bank without providing citizenship and equal rights to the Palestinians.

Michael Koplow of the Israel Policy Forum told Haaretz that “one-staters on the left and the right have very different visions of what a single state will look like. But their support for one state is creating joint momentum for a disastrous outcome that is going to leave most Israelis and Palestinians unhappy if it comes about.”