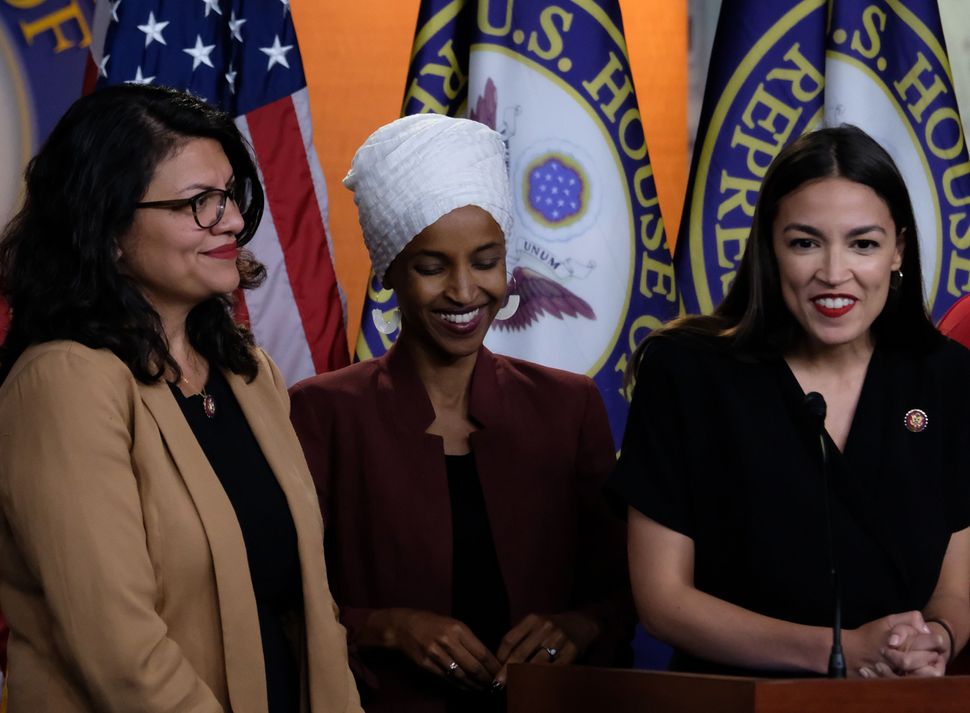 Reps. Rashida Tlaib, Ilhan Omar and Alexandria Ocasio-Cortez listen during a news conference at the U.S. Capitol on July 15, 2019 in Washington, DC. Image by Getty Images

Democratic U.S. Congresswomen Ilhan Omar and Rashida Tlaib are planning a visit to Israel and the West Bank in the coming weeks, but Israeli Prime Minister Benjamin Netanyahu will have to decide whether they would be let in to the country, over the support they have voiced for the boycott, divestment and sanctions movement.

The Jewish Insider first reported the lawmakers’ planned trip on Wednesday, noting that Omar said that the Israeli occupation of Palestinian territories will be the focal point of the trip: “Everything that I hear points to both sides feeling like there is still an occupation.”

Israeli law allows authorities to deny entry into the country by individuals who support boycotting the country. However, the Foreign Ministry has the authority to recommend to the Strategic Affairs Ministry and the Interior Ministry issuing waivers for political or diplomatic figures, if it deems denying them entry would harm Israel’s foreign relations.

Due to the sensitivity of the congresswomen’s planned visit and its possible ramifications on Israel-U.S. relations, Haaretz has learned Netanyahu would be asked to be the one to make the call on the issue.

Omar and Tlaib broke barriers when they were elected as the first Muslim U.S. congresswomen in November. Omar, who was born in Somalia and immigrated at a young age to Minnesota, and Tlaib, who was born in Michigan to Palestinian parents, have been outspoken about their views on the Israeli-Palestinian conflict, garnering accusations of Anti-Semitism for their statements and support for the BDS movement.

In 2012, Omar tweeted that Israel had “hypnotized the world” to carry out “evil,” a statement that garnered widespread accusations of anti-Semitism after it was brought to light. Earlier this year, she was embroiled in two separate anti-Semitism controversies, after tweeting in February that U.S. support for Israel is “all about the Benjamins,” insinuating that Israelis or Jews buy American influence, and again in March, for expressing and then doubling down on the idea that politicians who support Israel “push for allegiance to a foreign country.”

Tlaib puzzled historians in May after giving an interview in which she said her Palestinian ancestors were part of an attempt to “create a safe haven for Jews” after the Holocaust, although the role “was forced on them” and took place “in a way that took their human dignity away.” She is the only Democrat who has publically disavowed the two-state solution, supporting one state instead.

Tlaib conceived of her trip to the West Bank last year, and proposed it as an alternative to AIPAC-organized trips to Israel. She told the Intercept that she was “rejecting [the] Israel lobby’s influence over Congress” echoing and that her plan was a “rebuke of a decades-old tradition for newly elected members: a junket to Israel sponsored by the education arm” of AIPAC. “I want us to see that segregation and how that has really harmed us being able to achieve real peace in that region,” The Intercept quoted Tlaib as saying .

The trip was reported to be jeopardized on Sunday after the organizing group, the Humpty Dumpty Institute, which describes itself on its website as being “dedicated to tackling difficult global and domestic issues, pulled out of the trip due to scheduling conflicts. Regardless, a spokeswoman for Tlaib, the first Palestinian-American woman elected to Congress, told the Daily News she was “pretty sure” the trip would still be taking place in August.

“My city [of Beit Ur al-Fauqa] is so excited that I am possibly going to come to see her next month,” Tlaib said, according to Jewish Insider. “She is so happy. And I am going to take my two wonderful boys… and they are going to meet their great grandmother. So I am really, really excited about that.”