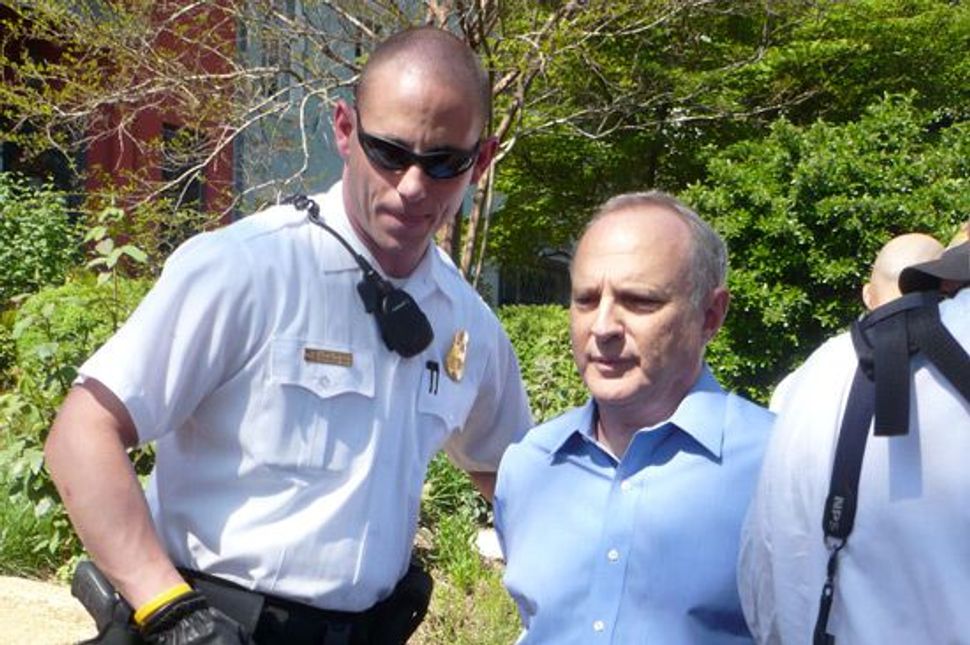 He may be America’s most influential rabbi — at least according to Newsweek — but that didn’t help Rabbi David Saperstein much with the Secret Service surrounding the Sudanese embassy in Washington.

On Monday, he was arrested, with two other activists and five members of Congress, during a demonstration outside the embassy. The group protested a recent decision of the Sudanese government led by Omar al-Bashir to kick out all humanitarian relief workers trying to help victims of the Darfur genocide.

After ending their speeches, the members of Congress and three leaders of the Save Darfur Coalition crossed the police line in front of the embassy and were immediately arrested. “We crossed the line to show that business as usual cannot go on,” said Saperstein upon returning to his Washington office following a 3-hour ordeal at the police precinct. He was charged with misdemeanor trespassing.

For Saperstein, head of the Religious Action Center of Reform Judaism and a well-known figure in the civil rights scene, this wasn’t the first arrest and may not be his last. “The Sudanese regime, which is in violation of the international law, must be symbolically confronted,” he said.

The next step will be to convince the Obama administration to take tough measures on Darfur in order to promote a peace accord, or alternatively, to impose tougher sanctions against the government in Khartoum.

Access to the White House, should be somewhat easier for Saperstein than entering the embassy of Sudan. Saperstein, known by some as “Obama’s rabbi” gave the invocation before Obama’s speech at the Democratic conference and was appointed by the president to serve on his Advisory Council on Faith Based and Neighborhood Initiatives.