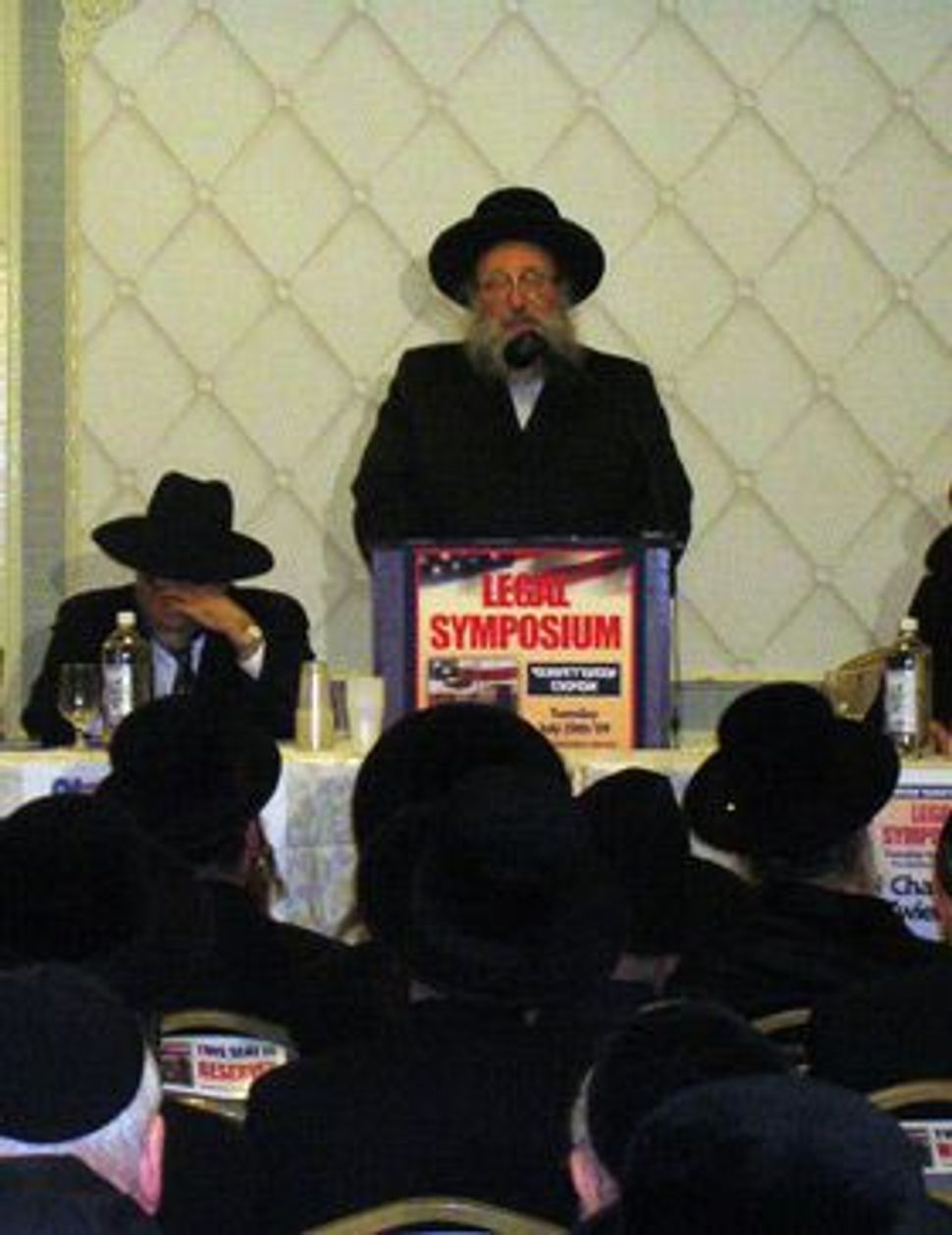 Every variety of fedora and yarmulke was on display as men poured into the central building of the Vizhnitz Hasidic community for a hastily arranged “legal symposium” Tuesday evening in Borough Park — the heart of ultra-Orthodox Brooklyn.

As we reported in this week’s Forward, the symposium was a part of an effort by some ultra-Orthodox leaders to take responsibility for the money-laundering scandal that erupted last week.

The most surprising moment of the night came at the very beginning, when the Grand Rabbi of the Spinka sect, Naftali Tzi Weisz, at right, took the stage for an unscheduled appearance. Weisz was arrested in a separate money-laundering case in 2007, and just last week he pleaded guilty, reportedly accepting a jail term. Before heading off to serve that term, Weisz delivered an obviously emotional mea culpa for his wrong-doings, first in Yiddish and then in awkwardly translated English.

“Unfortunately we have to admit in public that things happened that were not supposed to happen,” Weisz told the men in attendance (women were not invited to the forum). “We must have to express our wish that these matters will never happen — we have to commit that in the future this will never happen again.”

Weisz spoke in great detail about the compliance program that the Spinka board has entered with the government and he said, “Our community, baruch hashem, is not lacking in smart experienced lawyers and accountants that are willing to teach the tzibur [community], how to conduct their communal affairs in a manner that is in compliance with the law in all respects.”

The event kicked off with a prayer service and then a speech by Rabbi David Zwiebel, of Agudath Israel, in which he read out excerpts from a piece that Forward alumnus Jeffrey Goldberg posted on The Atlantic Monthly Web site, titled, “The Morality Crisis in Orthodox Judaism.”

Normally, criticism of the Haredi community in the secular press would provoke contempt and boos, but tonight most of the crowd looked on quietly and uncertainly. The lectern from which Zwiebel spoke had a poster on it that said “Legal Symposium,” with an American flag in the background. Cameras were flashing from every direction and overflow seating was set up upstairs, with a live feed of the proceedings.

The schedule after the Spinka rebbe’s appearance included celebrity defense lawyer Ben Brafman, and two big-name rabbis, who pounded the lectern and wailed as they pointed to examples in the Torah and Talmud of the importance of being honest in dealing with a goyische government.

Rabbi Dovid Ozeri, who came in from the Syrian Jewish community, which is at the center of the money-laundering probe, said, “We have to start thinking like the gedolim of previous generations; they appreciated the freedoms that this country offered.”

As the night went on, the audience kept growing and men were standing in every corner. In between speakers, Zwiebel asked men to clear the exits. “It’s a fire hazard — and it’s not consistent with the theme of tonight.”

The public signs of contrition went against many long-standing traditions in the Haredi community, and not everyone was willing to join in. Outside, an older gentleman was handing out pamphlets that accused the government of antisemitism in the arrest of the rabbis last week: “Had this been done to any other group in America — Christian pastors, Black preachers, Muslim imams, Catholic bishops — there would have been a huge outcry: “Racial Profiling, Bigotry, Entrapment …”

The pamphlet was signed by the Committee for Truth and Fairness in Media. When I asked the man distributing the pamphlets who supported the committee, he said that if he told me the FBI would come after him and his family as well. A crowd gathered around and a young man yelled out, “This is a blood libel!” Another said, “There’s a pogrom going on here!”