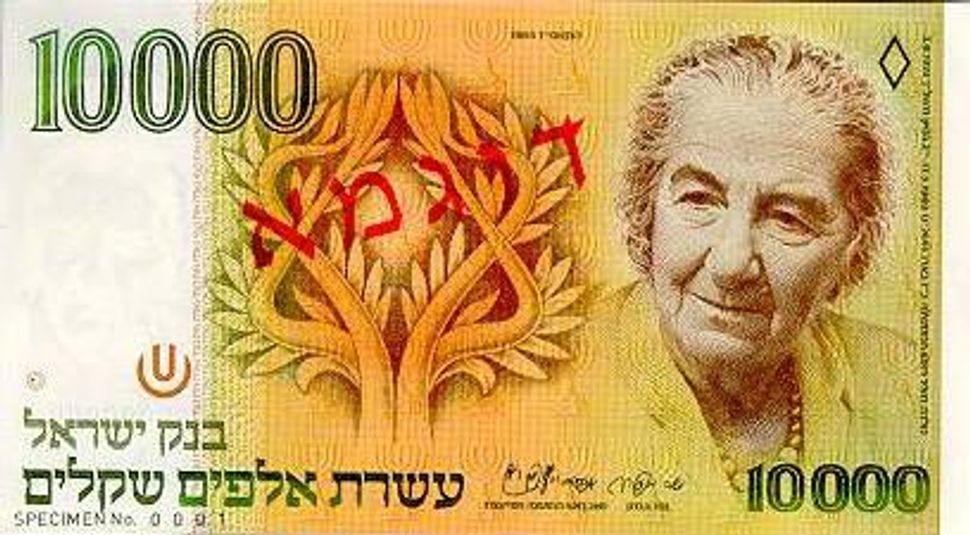 Since this note was replaced by a coin, women have been absent from Israeli currency. (click to enlarge)

At the moment, there are no women featured on Israeli coins or bills. Golda Meir used to appear on the now-defunct 10,000 shekel-note. But ever since the Old Israeli Shekel was replaced by the New Israeli Shekel at a ratio of 1,000 to 1, and the Meir bill replaced by a coin, women have remained absent.

The government has been talking about creating new bills since a formal announcement in February 2008, but thus far nothing has been done. Finance Minister Yuval Steinitz was reportedly furious at the proposal brought by the committee eight months ago, which offered four suggestions for figures to appear on the new bills: Theodore Herzl and David Ben-Gurion, both of whom have already appeared on Israeli money, Yitzhak Rabin, and Menachem Begin, whose family had, in the past, refused.

“There is nothing new here,” Steinitz said. But Steinitz, turns out, has a healthy dose of feminist consciousness. “We have many great women in Israeli art and culture,” he said, “who deserve the respect and recognition of having their faces representing the State of Israel.” Some of the names floating around are songwriter Naomi Shemer, poet Leah Goldberg, and the poet Rachel.

The currency committee headed by Yaakov Tirkel, who is also heading the committee investigating the flotilla events, dragged its feet for nearly a year – not because Tirkel has been busy, he insists, but because the committee was insulted by Steinitz’s rejection, the Bank of Israel reports. Last week’s announcement is thus a victory for Steinitz, the minister with the final word, but more so for women, who will now have some decision-making power and ultimately some recognition as national icons.