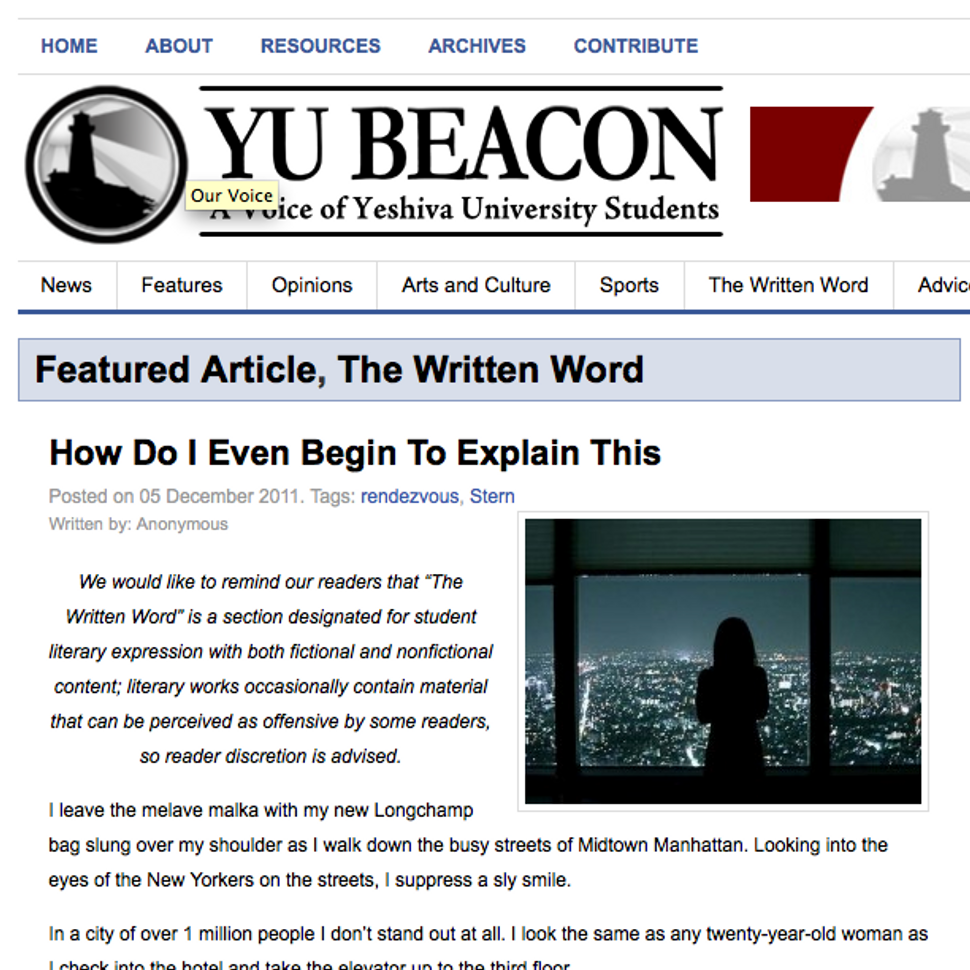 As a Stern College alumna, I feel the need to explain why the recent Beacon sex essay that described a premarital sexual encounter was received negatively by many Yeshiva University students and alumni.

Despite what the media seems to believe, YU students and alums are not afraid to discuss important and uncomfortable topics; we know full well that some Orthodox college students have premarital sex. However, Yeshiva University is a place where — unlike most American colleges campuses — this is not the norm. Many students and alumni have chosen YU, over schools widely deemed more prestigious, because they value a religious educational environment.

That some students personally violate Jewish law, or halacha, does not ruin this ideal. But a student publication publicizing someone’s decision to do so in order to represent the voice of all those who act similarly does great damage.

Those of us who were offended by the Beacon article are, for the most part, neither surprised nor particularly disturbed that an unmarried Stern girl had sex (although it personally saddens me as an observant Jew to hear of other Jews acting contrary to halacha). What was offensive was that the piece seemed to be designed for shock value rather than reasoned, intelligent discussion on what is admittedly a difficult topic in the Orthodox world. The Beacon’s response of talking widely to major national media outlets only furthers this perception of a spurious motive behind the decision to publish.

Beacon editor Simi Lampert writes, in this Sisterhood post, that YU has no forum for discussing taboo topics. This is patently untrue. First of all, the Yeshiva University Observer deals with controversial topics all the time. For example, I co-wrote this 2008 article examining why birth control is not available at YU’s health center (as it is in health centers at most other college campuses).

When my friend and former classmate Chana Wiznitzer was editor-in-chief during our senior year, each issue had a special features section dealing with a “taboo” theme. One month, the topic was mental health; another, it was abuse; another still it was, yes, sex and sexuality in the Orthodox community.

Chana herself points this out in her excellent analysis of the whole incident on her blog “The Curious Jew.” If this is not enough for Lampert, how about the various symposia and panel discussions YU routinely hosts on topics ranging from the Rubashkin affair to homosexuality — discussions that have drawn their fair share of ire from critics both outside and within the university.

The Beacon article could have dealt maturely with the issue of premarital sex among Orthodox college students had the writer, say, detailed the inner conflict between her Orthodox self and her modern self, and then explained the shame she says she experienced at the end (Was it shame over losing her virginity to the wrong guy? Shame over violating halacha? Shame over violating the social norms she’s accustomed to?) Instead, all we get is a trite tale about an Orthodox girl who slips up, feels bad, and now wants to talk about it so she can feel better. The Beacon itself could have started a real conversation about premarital sex among Orthodox college students; instead the minute some people voiced dissent, chose to make it into a media event and tarnish the name of Modern Orthodoxy’s flagship institution.

This is not the behavior of one who wants to provide a platform or tackle tough issues. It’s indicative of a need to shock, provoke, and then expose and deride the terrible closed-mindedness of anyone who felt shocked and provoked.

Yeshiva University is an Orthodox Jewish institution and holds true to Orthodox Jewish values. Sex as a sacred act to be reserved for marriage is one such value. YU students and administration alike should not be faulted for asserting that. Would anyone be surprised if, say, students and administrators at Brigham Young University had had a similar reaction to such an article printed in one of their student publications? Actually, back in March, BYU suspended a basketball player because he had premarital sex in violation of the school’s honor code. Many commentators poked fun at those prudish Mormons, but at the end of the day, most agreed that, well, you’d expect these kinds of rules at a Mormon university. The students know that going in, and they have to pay the price if they break the university’s rules.

YU has no such rules, and yet members of the campus community received such a backlash for standing up for their beliefs. For its part, the Beacon acted irresponsibly in challenging the university’s adherence and commitment to its Orthodox values.