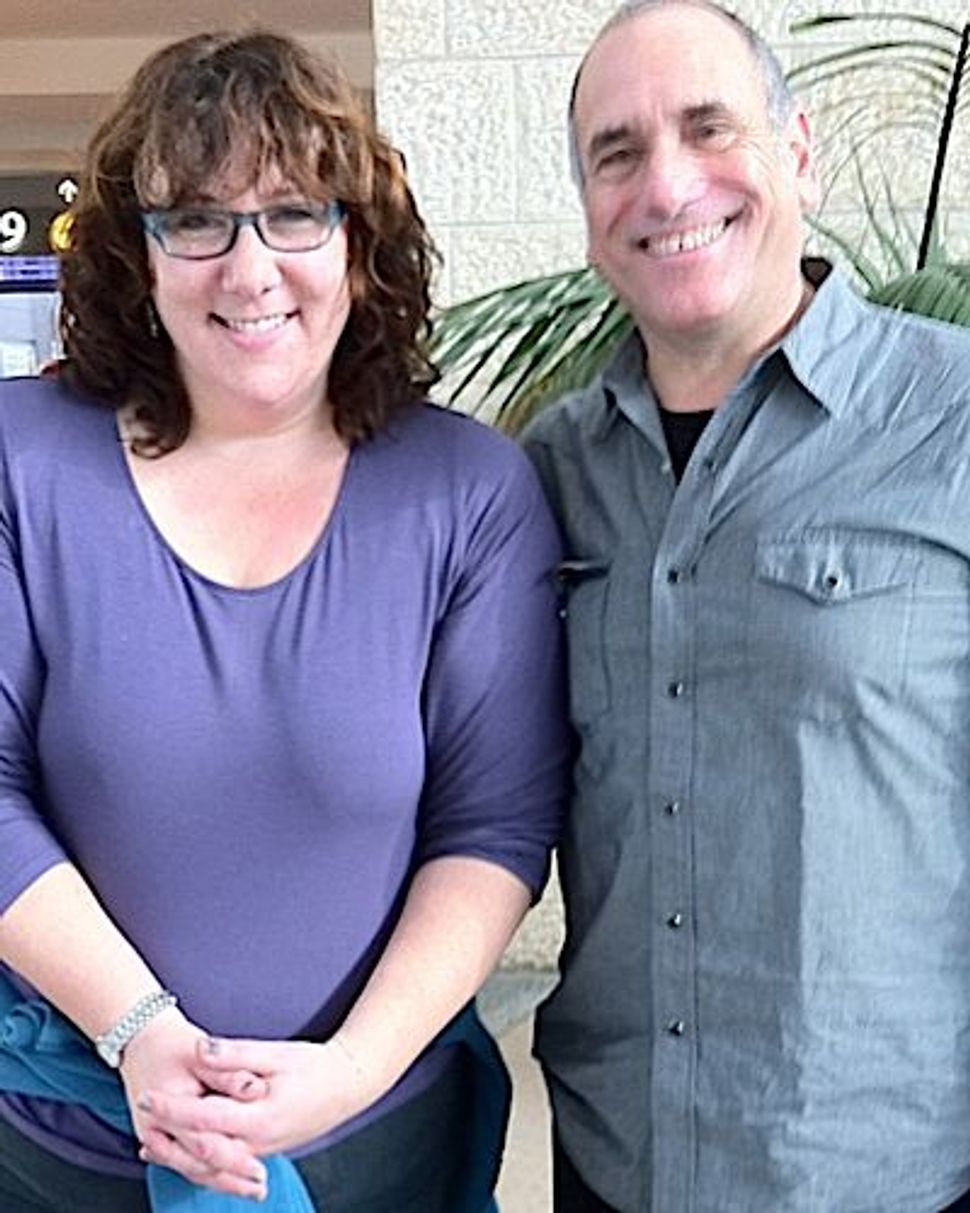 Debra Nussbaum Cohen, with singer/songwriter David Broza. Image by Courtesy of the Author

Jennifer Bleyer’s recent Sisterhood piece about the unexpected pleasures of her so-called “mama furlough” reminds me how much I have enjoyed my annual week, alone in my house, when my husband takes our kids camping.

I recently took the next step toward remembering who I used to be. For the first time in nearly 18 years of parenting, I took a pleasure trip — by myself.

My New York Torah study group, which has been meeting for about 15 years but I joined just this year, has a sister group in Jerusalem. There is a joint annual retreat to focus, in depth, on whatever we are studying, which this year is the work of Rabbi Nachman of Breslov. When it became clear that the retreat would be in Israel, I thought the answer was simple. I wouldn’t go. For so many reasons.

Financial, for one. We are preparing for Girlchik’s bat mitzvah, and putting away each available shekel to finance what I hope will be a lovely afternoon party.

There is also the serious challenge of being visually impaired.

I have a degenerative condition called Retinitis Pigmentosa, which has been an issue since I was a teenager. I’ve learned to work within its mandates. No living in the suburbs, where driving would be required, for example. A folding cane sits in my handbag, which I use whenever I’m on my own in a sunny, unfamiliar place (glare is a problem), in crowds (I have poor peripheral vision) or walking in the dark (ditto for night vision). Anxiety attends solo ventures into unfamiliar territory. And I have come to depend on the assistance of my husband and children, as well as friends, who know that when we are together I need verbal warning of stairs and curbs, and frequently to fold my hand over their crooked arm.

The retreat would be with a handful of study group members I’d only recently met, and a larger group of Israelis whose names I didn’t even know. Of my two close friends in the New York group, one couldn’t go and the other wasn’t sure if she would.

So, I thought, next time.

But I also heard the faint, distant voice of the part of me that used to love an adventure. When I went to Israel the first time, for instance, I had just graduated from a Protestant boarding high school and went for a year to a country where I did not speak a word of the language and we didn’t have a single relative or family friend. I subsequently visited Turkey and Morocco and Spain and Switzerland, with friends or for work. And managed fine.

Yet life has changed. My vision has gotten somewhat worse, but mostly, I realized, I have just become comfortable with life the way I’ve set it up.

The friend who couldn’t go, a founder of our study group, urged me (and urged me) to reconsider. She lovingly twisted my arm, explaining that there would be home hospitality and that the group’s cost-sharing philosophy meant it would likely cover any part of the expense that I couldn’t afford. I would manage with my vision issues, she said. And I would really enjoy it. Go, Debra, she said. You won’t regret it.

I have back problems now and need a good bed. What if my host has only a bad pull-out couch? I am allergic to cats and had a horrible bout of asthma after cat-sitting for a friend. What if the only host available has them? Too many uncertainties, and I would have to buy a ticket before learning who I could stay with.

But Debra, a small voice inside me said, you are too young to be so inflexible, so willing to pass on an experience that is right up your alley. I began wondering why such a mountain of internal resistance had risen up. And I realized that the flip side of setting up everything the way I need it — a good mattress and no cat, and nothing to trip me up on the floor at home — is that it has become hard to venture beyond it.

When did I become this person, so static and fixed? Is it part of being middle-aged, or is it possible that the ways in which we view ourselves become ossified in the course of a long marriage and parenting?

Take my maternal grandmother, for instance. When my grandfather died, it transformed her. She had always been biting, even to her granddaughters, constantly making cutting remarks. When Grandpa died, she became far warmer and approachable. Suddenly it was possible to have a normal conversation with her. And for the first time ever, she told her eldest child, my mother, that she loved her. It was as if the death of her husband of some 60 years — and they had what both claimed was a happy marriage — liberated her from some unseen and unnamed bondage of self-hood. I did not want to be that person. I love Torah study. What a rare opportunity to plunge in to my idea of a good time with people similarly inclined. So in the end I took a deep breath, and dove.

And it was fantastic. Magniv, as they say in the Holy Land. In just four days we traversed Reb Nachman’s world of metaphor and longing for connection with God, through his “Tale of the Seven Beggars,” which features a succession of wise men helping a pair of orphaned children lost in a forest. Each beggar is blighted with a specific deformity but blesses the children to be like him. What blessing were those beggars really bestowing?

We explored ourselves in Nachman’s archetypes, examining the ways in which a change in perspective can permit us to see gifts in what may at first seem to be defects.

I related most to the Blind Beggar, of course. Being on retreat gave me the room to examine my reaction after taking a spill because I don’t see something, as I did on Kibbutz Ein Gedi, when I missed a curb, and how I view this “defect.”

Being away from my family allowed me to swim in the deep wisdom offered up by Reb Nachman and my fellow study group members, without attention being fragmented by children’s needs or the phone ringing. It was nourishing spiritually, emotionally and intellectually. Plus I got to meet David Broza at the airport as we prepared to board the same flight to New York.

What have I learned from my small adventure? That the more resistance I feel, the more valuable the result of getting past it. That even if I trip and fall, that I can get right back up, catch my breath, and keep moving forward. And that time doing something personally meaningful, once in awhile, restores me in a deep way, allowing me to return to my family, ready to nurture them once more.