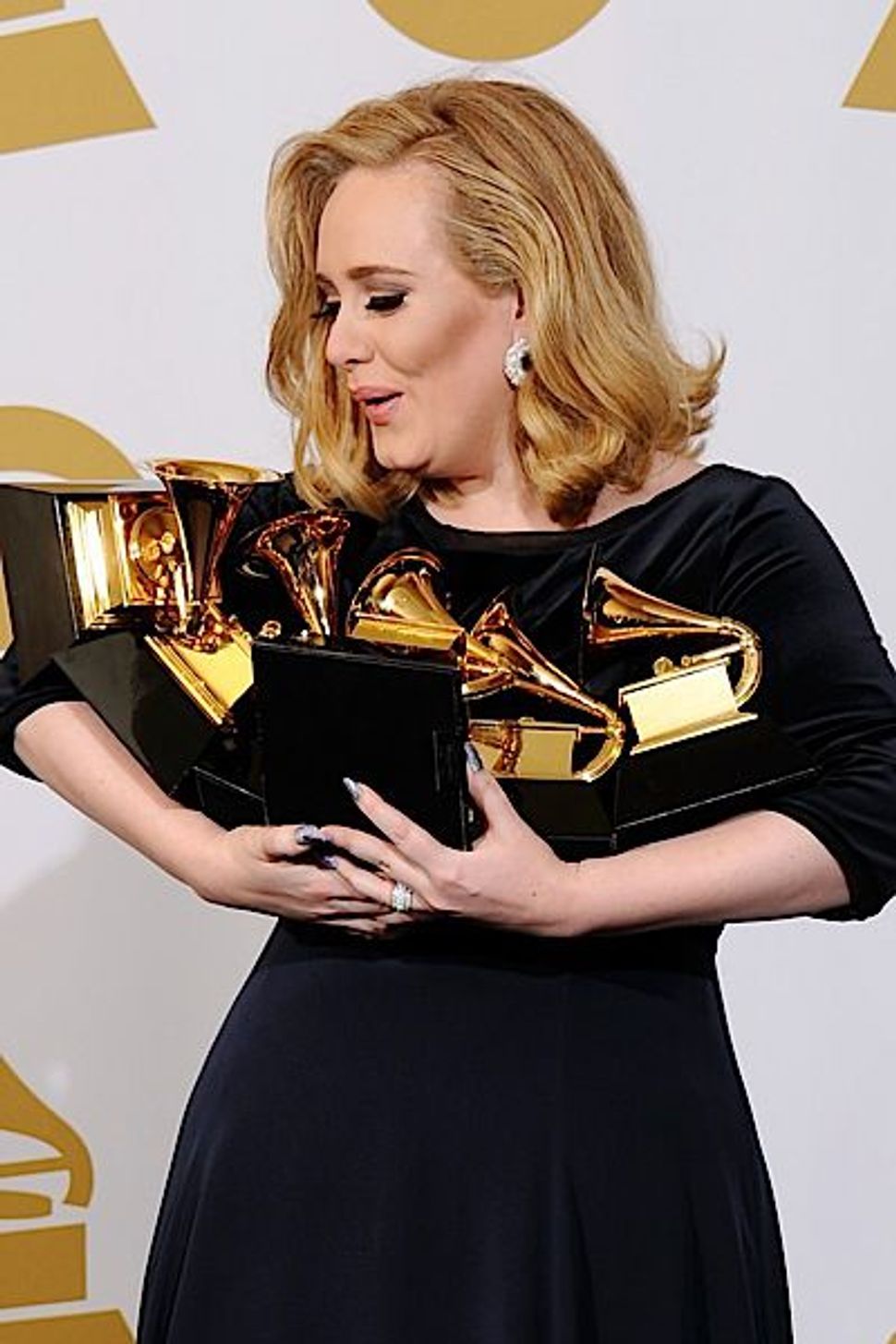 Adele with her six (count them!) Grammys. Image by Getty Images

First was the appearance of Chris Brown, convicted woman-beater, greeted with the kinds of cheers usually reserved for returned astronauts or war heroes. The poster child for how to beat women and still be a rock star won a Grammy for Best R&B Album, and the cameras did not even bother hinting at Brown’s dark side by, say, cutting to Rihanna, his 2009 punching bag, and reminding the audience whom they were cheering. Even worse were some of the tweets of the evening: @_anniegregg tweeted, “He can beat me up all night if he wants,” as did dozens of others, like @carmnem who said, “I wish chris brown would punch me.” Pretty frightening stuff. So much awareness about issues of domestic violence.

Against this backdrop was the tribute to Whitney Houston, who died the day before the award ceremony. It is fascinating to me how her untimely death keeps being referred to as a story about how drugs can ruin one’s life. (New York Times, for example.) Yet the fact that she, like Rihanna, lived the life of an abused woman has emerged as a sort of secondary threat. While we don’t yet know how Whitney Houston actually died, the fact is, three women a day die at the hands of their intimate partners in the United States, according to NOW. Living with an abusive poses at least as many dangers to a woman’s health as substance abuse. It just seems odd to me that Houston’s death has become a kind of gender-neutral story about drugs rather than a story about a life completely ruined by a dangerous relationship.

Finally, there was the stunning performance by the young superstar Adele, winner of a “ridiculous” (her words) six Grammy. Here’s what I loved about her performance: it was all about her amazing voice, which, astonishingly enough, is what singing is supposed to be about. Only, in recent years it really hasn’t been. American pop music culture has become so much about body, female sexuality and suggestiveness and so little about actual musical ability. And there was Adele, a big, healthy woman with a big voice, standing and singing with her fabulous back-up singers, being the extraordinary singer she is rather than writhing around stage, swinging from poles, swiveling her hips and shimmying her chest while wearing some skimpy get-up. She just sang. I love that. And she was dressed normally, too, not in some leave-nothing-to-the-imagination get-up but in a simple black dress that let you focus entirely on her music.

This is all in striking contrast, I might add, to Madonna’s Super Bowl performance last week. Not only was Madonna’s new Super Bowl song unimpressive musically, but the whole retro-cheerleader theme was just so sad and superficial. Add to that Madonna’s idiotic lyrics, “Don’t play the stupid game, cause I’m a different kind of girl” — and we have really got a gender problem. I wish someone would remind Madonna that she is not a “girl” but a 50-plus woman. Madonna is pathetically stuck in the idea that the only kind of musical performance is the kind that turns the singer into a waif-like sex toy.

Madonna has the status, wealth, freedom and creativity to do almost anything she wants. All she has to do is speak and people will listen. She should really allow herself to evolve into an adult woman. She can take on social issues like gender empowerment or social justice and make a difference. Other women have grown up from being “girls” to being mature and sophisticated in their messages. Take Mary J. Blige, for example, who espouses great feminist messages in her music, or Angelina Jolie, who takes on serious global issues. Watching Madonna idealize the teenage cheerleader was just a little sad, and a huge waste of her power.

The fact is, we need alternative models of femininity, even in pop culture, models not built around sexuality or victimhood, but around strength, skill and power. We need to see women who are not afraid to be genuinely great at what they do, to be passionate, strong and expressive.