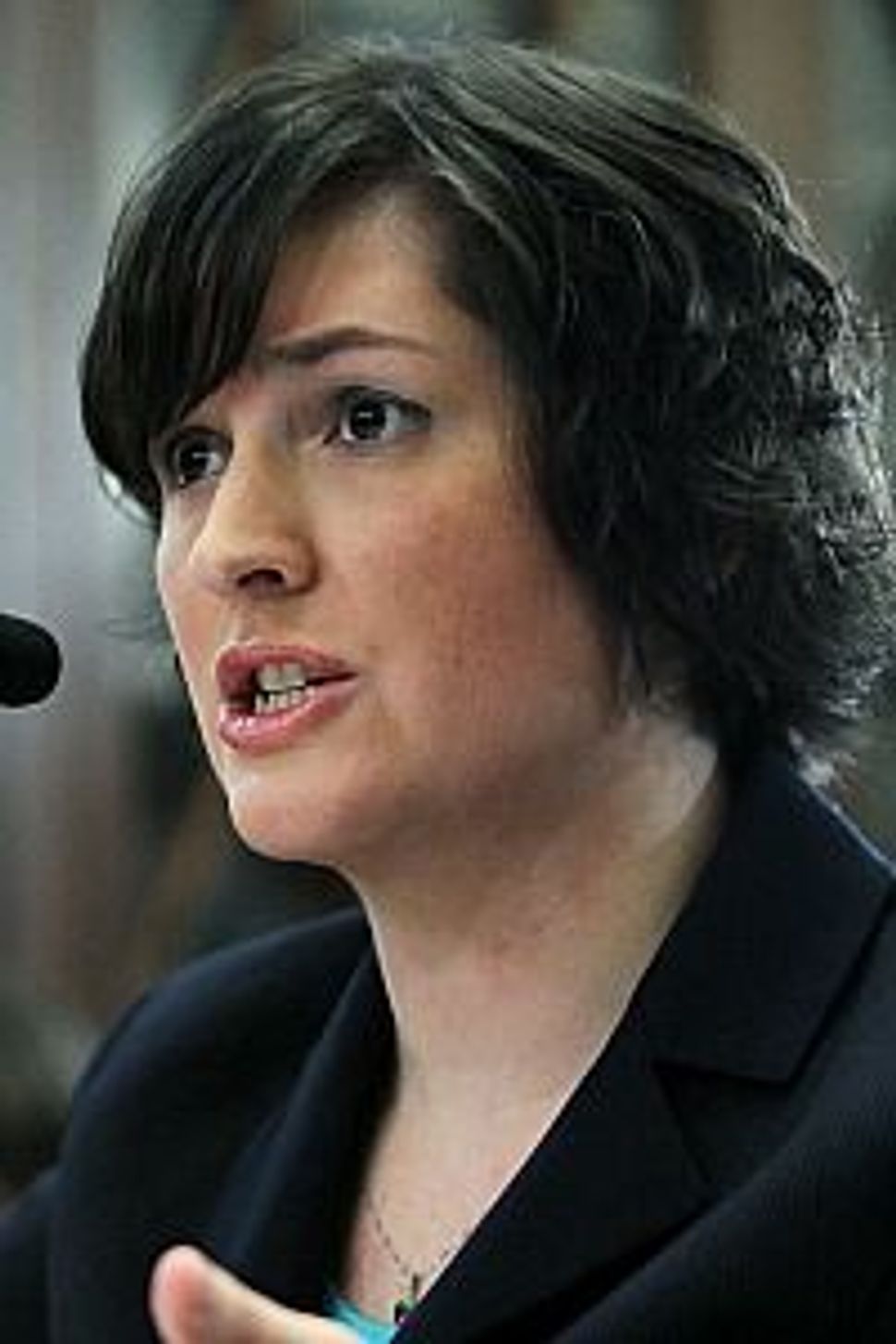 The latest salvo from the trenches of the extreme right against Georgetown Law student and contraception advocate Sandra Fluke is the most absurd yet, and matches the other slurs in offensiveness. Her latest crime is — wait for it — dating a Jew.

Yes, it’s not enough that Fluke had the gall to stand up for birth control coverage at her Catholic university. Based on a lot of online snooping, she’s apparently seeing (and, her detractors will immediately note, presumably using contraception with) Adam Mutterperl a member of the tribe, and therefore an adherent of, as blogger Brooks Bayne calls it, “the wealthy Mutterperl family’s long tradition of supporting the typical Jewish variant of socialism.”

Among Fluke’s sins in dating this seemingly nice Jewish boy are traveling with him to Europe and, um, the fact that his parents, despite being wealthy, are very liberal, and like many American Jews come from a nice long liberal tradition. In Bayne’s warped mind, there is a big Jewish conspiracy going on here, and it’s all muddled together with American progressive labor history, Barack Obama (of course), Brandeis, the Upper West Side, Karl Marx and more.

While continuing to dig at Fluke’s sex life, Bayne clearly has a particularly big thorn in his side about Brandeis, that hotbed of sedition in Waltham, Mass. (last time I heard, it was like many suburban schools, a hotbed of desperate undergrads taking trips off campus into the city but, you know). He writes:

To me, it’s obvious that she’s in bed with him, literally, or figuratively. Either way, Sandra’s connection to this particular Jewish-American socialist dynasty is a “little” secret that they don’t want you to know. Which begs the question… if you’re so connected to the Mutterperl family, Sandra, why not go to Brandeis, a school much more aligned with your worldview, instead of Georgetown University, a Catholic Jesuit school? Are you admitting that a Christian school is better than a neo-Marxist school, or is there some other agenda? Now that’s funny when you think about it.

What’s funny is that poor Mr. Bayne is so obviously eager to mount an absurd campaign against Fluke and even pit Brandeis against Georgetown. His rant about Fluke reminds me of Edith Wharton’s underlying anxiety, in “The House of Mirth,” over her fallen heroine Lily Bart being paired with the monied outsider and Jew Sim Rosedale. Even though Lily has broken the rules and expelled herself from polite society, heaven forfend she sully the race through Jewish connections.

At Tablet, Marc Tracy further explains why this rant, which too many conservatives are linking to in their desperation to prove that Sandra Fluke is part of a vast lefty conspiracy is anti-Semitic at its core: “Bayne isn’t arguing there is something Jewish about socialism. He is relying on the premise that there is something socialistic about Jewishness.”

The rant is also proof that Bayne and his ilk simply cannot believe that a young woman would simply stand up for her own rights without being propped up by some sort of conspiracy, a web of intrigue that will inevitably lead to black power, radical feminism and, apparently Jewish socialism.

Ed Schultz did a segment reviewing the rise of Fluke conspiracy theories and their spreading by Bill O’Reilly among others:

Sandra Fluke didn’t choose to be slurred by Rush Limbaugh and dismissed from the panel by Darrell Issa. The GOP dug its own trap on contraception, and focused on Fluke’s sex life to silence and shame her. Beyond that, there’s an underlying Nativist angst surrounding the smears of Fluke and of Fluke’s Jewish connections, and of the African-American professor Derrick Bell who has shared the title of current #1 GOP target with Fluke this past week.

Those who participate in these smears cannot stand anyone from a group that isn’t white, Christian and male asserting him or herself, being successful, or standing up to oppression. Some who share his ideology may not lump Jews in with blacks and women anymore in this regard, but Bayne’s attack on Fluke is evidence that Jewish success and Jewish social justice activism is still regarded by more than a few as antithetical to American conservative values.